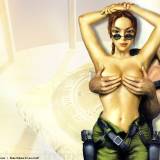 Well it has been a busy first half of the month gaming wise. With Gears of War 3 fast approaching I have been trying to wrap up a few other games and some older ones. I rented Space Marine and completed it over 2 days. Its a really fun and surprisingly colourful game. I love the iconic scenery in it and I love the work that Relic do with the 40k franchise. It is a bit short but its a really fun game to play and really sets me up nicely for Gears 3 as it has a lot of similar gameplay elements. It presented a world I love really well and was a great rental, but thank God I didn't buy it cause its like 6 hours long. I did not like the multiplayer so it wouldn't exactly have a lot of replay value for me. Having said that I loved a lot of the game, specially the 3 way fight between the Imperials, Chaos and the Orks. That cutscene where the Ork boss and Chaos lord clash its brilliant.

I bought Resistance 3 and I have to say Insomniac did themselves justice with the Resistance franchise at last. I was not crazy about Resistance 2 and the first game did not wow me either. From the first major fight in the town of Haven I seen numerous ways that the game had improved. The graphics alone are a lot better than Resistance 2. The way the enemies move, the options you have in terms of buildings you can go into, its really flexible weapon choices, its great. The chimera are really fun to fight in it and the game has pulled a few surprises on me in its campaign. I am on chapter 17 so nearing the end, but unless the game fucks up towards its conclusion it will get a great review from me.

I have not been able to get a rental copy of Dead Island yet, that one seems very popular but I will eventually get around to playing it. I have continued playing Pokemon White, which is going really well, and the Witcher 2 which is an incredible campaign but takes a lot of effort to sit down and play.

In preparation for Gears 3 I have begun replaying Gears of War 1. The campaign in that game has not aged particularly well but its still a fantastic game. I will try to do a review of it before I play Gears of War 3 but we will see if time allows. I am also replaying Bioshock 1, trying to get all the audio logs and soaking up the atmosphere. Its an incredible game and I love it even more now than I did then.

Looking ahead I want to get the God of War Origins Collection, pretty excited about playing Ghost of Sparta on a tv. I will be getting Gears of War 3 as well so hopefully the multiplayer problems that plagued Gears 2 are gone and the campaign is solid. On a final and possibly hugely expensive note, because of Space Marine I now really want to pick Warhammer back up after a long hiatus in it. I am undecided about what army or even what system. I always preferred fantasy and that has a new edition since I last played it but 40k is looking good as well with new tyranid and dark eldar codex books. Its a tough call and I will probably wait till January to decide. I guess I can just divert the money I was going to spend on an decent 3DS stuff to warhammer because lets face it, there is no decent Nintendo stuff for the 3DS.

Resident Evil 4 just did everything right so for me its that.

Jak and Daxter HD needs to happen. I would love to see a remake of the Legacy of Kain games as well.

Try to change the platform you have the review for, ie: if its for pc change it to 360. might not work but worth a try I guess.

Duke Nukem Forever really is a huge failure in terms of game quality. I didn't expect much from it after its development cycle but pretty much every aspect of it falls flat on its face and its extremely generous to describe it as mediocre.

LA Noire as well. Also Metro 2033, Darksiders, Vanquish, Crysis 1 and 2, Cod World at War and FFXIII all spring to mind.

Well I love Oblivion but Morrowind certainly odes have a rich lore and backstory in the game. I would love them to marry the best elements of both those games together because Morrowind's combat system is very poor. If they can get some interesting factions akin to the great houses in Morrowind then I would be very happy.

I am now very worried about Mass Effect 3. While I have faith in Bioware and will reserve judgement on multiplayer additions till we get more details on them, this is definitely a turn that concerns me.

I completely agree, Heavy Rain was a far more engrossing experience. While it has its problems I was so interested in the story that it tells and the characters. LA Noire was badly paced and had inconsistent case quality. I was enjoying LA Noire all the same until you reach the vice cases and then I thought the game fell apart.