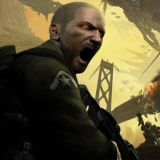 I got mine and love it, No issue, even if it was slightly off I don't mind.

So I got jazz punk on the steam summer sale and I love it. But after 30 mins I start to feel sick.and the same pattern thenext time I played too. I'll p at it but going to be a while till I finish if I take 30mim sessions.

What games do you like that you can't play in long sessions or make you motion sick?

While I at the show, I saw several full armed police officers as well as a k9 unit. The first door open was a cluster fuck but ever other time I went into the doors I got my badge checked. The first day they checked everyone's IDs before entering.

Also why e3 is a bit different is that your badge has your legal name on it, yes you could exchange it with someone else but if something happened they can easily trace it.

I understand that it could be improved however a lot of what we see at events and the airport is just theater Adam ruins everything did a great piece dismantling airport security. point being, a lot of it doesn't work.

I finished this 2 weeks ago and won my local competition for it.

Love the way it came out, though I still need work on my Camera/posing/photoshoping when I capture my kits.

I love metalcore. And like its Music there are a trillion bands out there if you don't like it find something new.

What bugs me is that they say they will strike channels. Like fuck off right, that is an abuse of the system.

I watched it and really liked it. I am a huge fan or the original movie and I feel they did a good job of compressing some of the fucking bull shit. The more I think about it the more I understand the little things they did to add a bunch of philosophy into the movie without having huge dialogue scene. I think a lot of people mis-remember the original film.

I wanted some more of the rest of section 9 I feel like they glossed over a lot of it. Aramaki's japanese dialog felt pretty stiff but I DO Like they they did in Japanese.

It really makes me sad that fans of the lore won't bother seeing this movie. I think its wrong to say this is just a remake of the 95 film, and if you take that attitude then I think you will enjoy it.

Scarlo does a great job and if you watch the movie you know that her race , and her race being stolen away from her is the point and goes along with the themes of identity

Also about race, they changed all most all of the races and genders of section 9 so which also references the 95 film about globalism.

When did gizmodo turn into a gossip rag? Wasn't it suppose to be tech.

I kind of want to buy it, the art and packaging look amazing .

FYI someone did already rip it to youttube, if you don't want to spend 30 bucks on a CD.

You buy a ps3 with ps2 comparability.

other then that no its not possible.