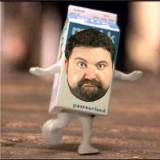 My gold medal is gone! Breaking Brad is happening! I've made a terrible mistake!

As someone who is financially... uh... let's say limited, backwards compatibility would actually make it a lot more likely that I pick up a new console sooner rather than later.

I never am able to play every game I wanted to from the previous generation by the time a new generation roles around. Hell I still have a bunch of GCN/XBOX/PS2 games I intend to get to someday, not to mention some N64/PSN, and SNES/GEN (that's about as far back as I'm willing to go). If a new console could play the games from the previous generation I'm still interested in playing and opens up a whole suite of new games to me, and also I factor in that this means I could trade in my old console a brand new console purchase which is probably the most important part, the idea suddenly seems much more reasonable than throwing hundreds of dollars on a brand new console that hasn't yet built up a huge library of games I want would otherwise be.

So if, for example, I could play Wii U games on a Switch and that freed me up to trade in my Wii U towards that Switch I could probably talk myself into doing so, if not right now then almost certainly when the new Mario game comes around. But since I can't, I probably won't get a Switch for quite some time, possibly years, unless somehow my financial situation changes for the better.

I'm pretty sure regular superhot is different from superhot vr but hey I'll take it if you don't want it...

I finished Blind Man's Bluff. It was a damn interesting look at sub espionage in the cold war. Drew did not steer me wrong. So thank you @drewbert

I'm about halfway through a book called The Invention of Nature about Alexander von Humboldt, someone I didn't really know about before buying the book, but turns out he was a rather brilliant and influential scientist from the early 1800s, particularly when it comes to his ideas and practices regarding nature. At one point in his life he was said to be the second most famous person in the world, only Napoleon was believed to be more well known. He was one of the first scientists given permission to explore much of the Spanish controlled regions of the Americas, his theories and writing influenced all sorts of people from scientists like Darwin to poets like Wordsworth, he hung out with Thomas Jefferson and Simon Bolivar, and there are probably more places named after him than anyone else. The state of Nevada was apparently almost named Humboldt.

I quite like the guy. He was staunchly anti slavery, anti colonialism, took notice of and spoke out against mankind's harmful impact on nature in a time before climate change was a thing, gave free lectures to audiences that included women at a time when women weren't allowed to study science, and apparently on what would have been his 100th birthday there were celebrations in his honor held all over the world. So this book has been delightful and enlightening.

As for fiction I'll start American Gods in the near future.

Here are some of my ideas that are all super dumb.

2 months later I will change that Clue one to reflect the present vernacular.

I finished Hero of the Empire. It was good.

Now I'm gonna start Blind Man's Bluff because Internet Meme Celebrity Drew Scanlon recommended it on a bombcast or something at some point.

Some of the highlights from the many games that have been at or near the top of my "to do list" for a while now but keep getting shoved further and further down the backlog include:

Some of my favorite gaming experiences have been co-op.

Playing Secret of Mana with my older and, sometimes also younger, brother. Until I fucked up and saved over my older brother's furthest save... I don't remember much in the way of specifics but I do remember one time we were playing it and somehow I got us stuck with a glitch when we all just happened to walk over to the side of the screen so the screen shifted to the next screen, but then I was on a little chunk of land that was disconnected from the main path and no matter what we tried we couldn't undo what had happened.

I haven't finished that game though I still very much want to, but while I could play through it solo I am kinda saving it hoping at some point in the future I'll have a chance to play it co-op with someone.

Perfect Dark's co-op was also a good time with various friends and occasionally also my younger brother again. There was a summer where we played the hell out of that game, and sure death match was fun, but one of my friends was noticeably better at the game than the rest of us and also was the sort of guy who was a terrible loser and not a great winner so it could get a little grating after a while, to say the least. So the co-op stuff was probably my favorite part.

Recently I've played a bunch of co-op games with my nephew. It has been a regular thing for a few years now and started when he was about as old as I was when I was playing games with my older brother and the age gap between me and my nephew is actually about the same as that as me and my (much) older brother, so it very much reminds me of the days of playing games with my older brother, only now I'm the older one who is better at games and thus has to handle the hard parts. We've played Halo Reach and Borderlands 2 and Littlebigplanet and various other things. I just wish he didn't want to play so much COD zombie mode...

I finished Under the Udala Trees last week or so, it was a really good emotionally touching story.

After finishing it I decided to go with something that would be more potentially along the lines of dumb fun, so I picked a book called Beneath the Dark Ice. It's a story about a rescue team sent to Antarctica only they find much more than they planned. Now that I'm nearly done I'm not sure it fit either the dumb or fun end of things. I wouldn't call it dumb, instead I'd say it's lacking any subtlety at all with anything it's doing and it's full of cliched and overused tropes, like "humans only use a small percent of the brain so what'd happen if we could use more?" And because it's not subtle and also relying on well worn cliches and tropes and not really doing anything surprising or particularly interesting with them it hasn't been as fun as I thought it sounded. It just feels sorta by the numbers.

Having said that I'm a sucker for a "lost in the cold and shit goes bad" sorta story so I'm still into it, just not as into it as I hoped.

When I was little my older (much much older) brother went away for a few days. He had been playing Secret of Mana, and my younger brother and I would play it with him from time to time. I liked the game enough that I wanted to play it myself while he was gone. He said something to the effect of "you can play it as long as you don't save over my furthest save."

I forgot which save slot he said not to save over.

I am the monster of this lost save horror story.

He actually hasn't touched a video game since this time.

I haven't started the game yet and if I can't name my group MonetizeTeens then I'm not gonna bother starting it at all.