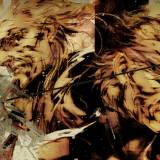 So I've got these dumb video game movie things, I don't know.

Hey, duders, I've mentioned in the past how I've been uploading my own cinematic edits of video games on Youtube, and I'm still at it. However, some things have changed. I've gotten rid of all of the old videos I had up, which were SD and of poor quality, and have now begun to add HD stuff on there. I've got a pretty decent stack of things on there, so feel free to check it out here.

For those that don't know, the purpose of these is that I try and make the smoothest film version of video games that I can, including editing things like pacing, structure, and even soundtracking in certain cases. If you're the type of person that cares more about the stories in games than the actual game part, or if you want to relive something in a much more time conscious fashion, this is the thing for you. Anyway, I'll try to keep a list of what I've got on here, for quick reference, so pick something and have some fun.

The Last of Us

Resident Evil (The entire story from RE0 to RE6, separated into Season 1 and Season 2)

More things will pop up over the course of the year, so be sure to keep an eye out!

NOTE: This is a repost of a topic I made. I'm making it a blog now, because I realized making it a topic instead was kind of dumb. Sorry, don't make topics/blogs at all really, so wasn't sure what the best option was. So yeah, just ignore the old topic. In fact, if anyone can tell me how to kill the old one, feel free to let me know.

Well, here's something. Obviously, one thing that's blossomed recently with the advent of Youtube is the act of uploading cutscenes online, or compiling them together as a movie. I aim to put my own mark on this practice, as a proponent of the appreciation of game plots. Over the last few years, I've begun the process of recording various video games, and turning them into feature length movies. Or above feature length, in certain cases I suppose. While it started out with the simple duty of taking all the cutscenes and smashing them together like you usually see, it has evolved into something far more ambitious, and infinitely more watchable. My rule for editing is that I am trying to make the most cinematic version of the story possible, which can sometimes mean I go through some extreme methods than you usually find with the cutscene compilations on Youtube. Therefore, I present my Youtube channel, which now houses some of my more recent work!

My edits come in various forms. I have more detailed descriptions within the videos themselves, but I understand for the sake of time it's easier to have a list here. As such, I'll write a list of what's available right now, and what exactly I did to each project. I will update this list over time as I add more movies.

RESIDENT EVIL SAGA(EPISODE 1 DONE): A chronological retelling of the entire Resident Evil story, using every game in the series. Right now, only the first episode is up, which encompasses RE0-REmake. This is probably one of my "simpler" edits, as the difficulty more came from structuring everything. Outside of my normal editing, probably one of the more unique things about RESAGA is that for RE1-RE3(when I get to RE2 and RE3, that is), I am working on taking all of the loading freezes out of the cutscenes, so that it doesn't hitch when it changes camera angles any more, leading to a much smoother experience.

METAL GEAR(MGS3, MPO, and MPW DONE): Being that it's one of my favorite series, Metal Gear was a natural choice for this. So far, I've finished Snake Eater, Portable Ops, and Peace Walker. These edits are very intensive, and fascinating in and of themselves. One of the recurring themes that you hear when people talk about Metal Gear is that "Kojima needs an editor". The idea that there's a great kernel within his stories, but that they are surrounded by so much excess and extravagance that you can't even get to it. Therefore, I wanted to test the theory. So, because of that, nothing is sacred. I go so far as to cut content out of the middle of cutscenes, and dramatically alter the pacing, to see if indeed all he needs is trimming, and if it makes for a stronger product after all. Perhaps this can also serve as a way for people who haven't been able to get into the series to do so, without it feeling as impenetrable.

INDIGO PROPHECY: Now here's where it gets real interesting. Indigo Prophecy was the start of the next phase of my editing stuff, and a show of how far I want to take this. I have completely taken all of the music out of the game, and have replaced it with my own choices. Between that, editing subplots(or removing them), as well as adding an entirely new visual filter to the entire movie, I wanted to give it a feel that you will not find anywhere else, and one that makes it feel like a more modern project. Realizing the weaknesses of the game, I hoped that this rendition would give the game a more consistent tone, and would make you see it in a way that you never have before. While I think all of my projects turned out great, this one in particular I am really proud of, and truly is more revealing of my goals.

THE WALKING DEAD(EPISODE 1 DONE): After Indigo Prophecy, I wanted to apply those same tenets to something else, so therefore, The Walking Dead was one of my first choices. It's already a fantastic story, so the idea of molding it into something unique and personal sounded exciting. Right now, I have only finished the first episode(I'm in the process of doing the second). I have once again stripped out the music and replaced it with a variety of score and songs, leading to an entirely different feel that will hopefully enhance the emotional aspect even more so than it was before. Also, in an effort to make it more in line with the comic with which it shares its universe, I have converted it to Black and White, which lends to a cool effect. Some of the camera shots look so much more old fashioned and classic with the B&W, and I love it. Also, TWD is such a good candidate for this due to its technical issues, such as long loading times or stutters between camera shots. Put together, it feels so awesome.

NINJA BLADE: Ninja Blade is a super ridiculous game, and I just wanted to cut it together. Simple as that. This is a more mainline edit, but probably the biggest things I did was take out the crazy constant close ups to denote upcoming QTEs, and just made everything as tight as humanly possible. Thanks to the plethora of QTEs, gameplay was borderline unnecessary, and with some clever cutting, I was able to make it seem like some events took place where they actually didn't making the action scenes feel very seamless and interconnected, even if maybe they weren't before. It's simple, but I think it turned out pretty great, if not just for some dumb fun.

DMC: DEVIL MAY CRY/VERGIL'S DOWNFALL: Regardless of some of the rage around the game, I absolutely loved DmC back when it came out, and I thought it was a perfect candidate for all of this. Much like Ninja Blade, it's more of a mainline edit, but one of the more interesting things with messing with it was trying to use the gameplay to augment the action scenes already naturally in there, without making it excessive. I also uploaded Vergil's Downfall, because why the heck not? It turned out well, and it's a great way to experience the story if you're just curious and don't feel like getting all the way through the game, for whatever reason.

Now, one final word before someone chews me out about it: I know they aren't in HD. I simply don't have the extra funds to get the capture stuff right now, so my current method is recording my gameplay footage from the system onto a DVD, ripping said DVD, and then editing it. One day(especially when the new consoles are out as I won't have a choice), I do want to upgrade, but I just can't right now. Rent, food, and all that.

So that's where we're at for now. As I said, I'll update as I get more done. Hopefully you take the time to check it out, and feel free to either leave feedback here or on YT. Load up a playlist and enjoy!