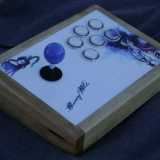 Very first gamejam, first time releasing anything into the wild. GiantBomb Road Trip 2017, Created while also taking an emergency road trip and having one of the most hectic weeks of my life. Great games everyone! Thanks for putting this on. edit: I suppose it goes without saying, this is much smaller than original vision, but I think it turned out OK. I needed to pick something with less writing though.

Here's yet another take as to "How & why could this happen?" that even triggered a "change of mind" for Totalbiscuit. Maybe the video, and TB's post, are some food for thought for people who are still absolutely puzzled/depressed as to how this could happen and what to do about it.

This is good. Thank you. Not the entirety of what happened obviously, but certainly a large piece of the puzzle.

@bonorbitz: You don't have to get so defensive about it. You're actively wondering in your post why people are deflecting and being defensive and not answering to why they stood with racists. I'm telling you why some would, based on what you posted, and from the people I know who are trump supporters and how they react to similar conversations, and from experience with those same type of questions as someone not even voting for Trump but also not for their candidate. I'm sorry for generalizing about the general tone of those conversations and projecting them on yours.

Another thing that blows my mind is that there's no response, defense or denial when I mention that they stood alongside those who are racists, bigots, sexists, xenophobes, LGBTQ-phobes when they casted their votes for Trump. They just respond with either I'm upset that "my side lost", I'm being uncivil for resisting unity, or that we need to be "positive for the future". This is some family and friends of mine. I look at them in a different light now...

I'm sure you totally reasonably explained to them how bad their candidate was and in no way imply that they are the same by aligning themselves with him. I'm just letting you know they've heard it, most likely. Yes its a generalization. As a Republican voting 3rd party I had to explain myself to plenty of people why not voting for Hillary doesn't make me a terrible person, even in a state that was ridiculously blue.

@bonorbitz: They've been told, for going on a year now and some longer, that their opinion doesn't matter, why do you want it now? You don't want to hear it because of their race or sex or sexuality, but more importantly because of their political leaning. Your accusations, and maybe not yours but those on your side, have dampened the words you're using. "You've voted with racists!" isn't going to work when it didn't even work before they entered the voting booth. Why do you care to hear a defense of it now, when your response before was to inform them their opinion didn't matter, or it made them a racist/sexist/bigot/homophobe/islamophobe? Is it just so you can tell them again that they are? They are trump supporters, you don't care about their reasoning beyond those terms, and they probably already know it or have heard it. Are you prepared to accept an answer that isn't directly admission of being a bigot? Are you willing to listen to that answer and not immediately jump to that conclusion?

As someone who didn't even vote for the guy, by all means please be the opposition we're going to need. Form coalitions and take back the legislature in 2018. Protest what you believe! "He's not my president" may be cathartic, but ultimately its going to take reaching these people with your ideas -OR- finding candidates that motivate people to get out and vote for their interests. In fact if trump is pissing people off with policy its only 2 short years before you get the chance to essentially shut down his agenda.

@thatpinguino: A little of all 3. In person conversations met with derision (less common, obviously, since there's nuance to the conversation) and usually social media posts expressing as much after the fact. Online conversations with people I know and those I don't of course. And in the cases of some like BLM activity and what to actually DO about it, I just remain out of because expressing an opinion isn't appropriate and the outcome is obvious from other comments, other people talking, etc. These are of course anecdotal, but you see it across the spectrum even now. Look at this very thread. The idea that anyone voted for trump and ISNT a virulent racist/homophobe/bigot is completely foreign to some. The entire elite left is making that accusation of all Trump supporters.

Over the last 8 months I've mostly observed, retreated from having conversations about political topics that might be misconstrued. People have not been trying to persuade, and I think that's a general consequence of this particular election. We retreat into our own bubbles or echo chambers, we no longer have an exchange of ideas, so ideas aren't worth very much. There's going to be a lot of analysis of this election, I believe part of the issue is very much the immediate move by the left to demonize the other side as specifically hateful has contributed. As a 3rd party voter I've seen it from both sides, but much more from the progressive left(selection bias likely, I live in a blue state).

@osaladin: I'll help you out a bit. I'm a Johnson supporter, on policy not out of spite for either candidate, I feel good about my vote. I would not have voted for either major party candidate. I vote mostly R down ticket with a few exceptions based on policy for local elections. I was more leaning Trump than Hillary, but in the end I voted for the person I actually wanted rather than a vote against another nominee. In this cycle, the left has demonized every stance of conservative America. The boy who cried wolf comes to mind, you cant call everything racism and expect that term to continue to carry weight when the people you're calling racist don't feel it in their hearts. A few examples of my own views on current topics and the reactions I've experienced first hand when talking with progressive friends and family members:

I think we need to take a very close look at border security, in addition to reform of the immigration system at large to help ease the process and lower the number of illegal aliens living in the US. I'm ambivalent on amnesty, we need to figure something out and if thats part of it then so be it. Illegal immigrants hurt our specific business (construction, border state) in a big way, and its something that directly affects me. This makes me a racist, a bigot, I hate brown people, I'm stupid or ignorant in the eyes of democrats, a xenophobe. I'm a white male, I'm not supposed to have a stance on this that isn't a rubber stamp of progressive ideals which depending on source range all the way from status quo to fully open borders.

I'm a bit concerned, maybe a bit conflicted about mandating all bathrooms and locker rooms in our public schools being gender neutral. My mid-school age daughter doesn't seem to care/hasn't had any issue and it will probably never affect her anyway, I'm not sure this needed to be as big an issue as it was. Because of this I'm a homophobe, anti-LGBT, ignorant, stupid. I must not care about my LGBT friends or acquaintances.

I see a need for police reform in some areas, specifically a shift to more community policing and away from militant enforcement, but I also see BLM and shake my head at most of the causes/cases they chose to protest. As a white dude I will never express this view in person, because then I'm turbo racist. God forbid there be any discussion on this matter, I simply don't have an opinion because I'm white.

I dislike both Trump and Hillary, but "I'm not trump" wasn't a compelling argument for my vote. Her deception at every turn made me question the entirety of her platform. This, clearly, makes me a misogynist, uneducated, I have to hate all women because I disagree with this one on policy and honesty grounds. Same with disagreeing with Obama on some policies, that 100% makes me a racist.

That's just a sampling, but anything you disagree with or have a different ideological stance is always met with claims of racism, homophobia, xenophobia, sexism, islamophobia, and continue down the list. Trump comes along, and those same insults are hurled at him. Things are taken out of context, and some in context as well which are very bad, but then we can easily look at them in another light. I don't feel I'm those things, maybe they're twisting his views too?

He spoke in platitudes he likely cannot/will not fulfill, but it was what people wanted to hear. "He's a racist, bigot, homophobe!!!" didn't resonate with the people that have been called that for the last several years, I don't find that super surprising.

Make that, plus a home made tomato basil soup. Dont need to make the sandwich over charcoal like he does, a stovetop grill pan or skillet will work. DONE

@mattadord: EVE online is divided into "High Sec" where attacking other people brings the space police, Low Sec Where only stargate and station defenses will protect you, and Nullsec where anything goes, wild west style. While all the lowsec and highsec star systems have names, very few nullsec systems have names(and there are hundreds upon hundreds of them). They are assigned a 5 character alpha-numeric designation almost always with one dash in the name. This is long to say over voice coms when time and understanding are critical(9GYL-0 = nine gee why el tack zero, for example) so we typically shorten it to 3 characters unless it has some way to pronounce the system otherwise (Nine guy for the above example).

In this case, V-3 actually has 3 different possible systems that start with those characters, but he's referring to one in the Catch region since that's where we lived, meaning he's talking about V-3YG7, one of more popular systems our alliance used to live in and around. Thus ends your boring eve lesson of the afternoon.

Edit to add: You can see the system, constellation, and region designation in the top left corner of Dave's screenshots, though no one used the constellation info really.