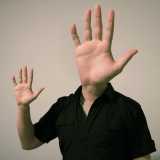 I have a little one-man band project going on, and I have the guitars, bass and drums pretty much covered, but I can't sing for shit, and I don't really know anyone who can. So if anyone out there, who are fairly decent at rock/metal vocals, would be interested in helping out in a musical project, you are more than welcome, if you are so inclined! It's not a professional project by any means, just something for the hell of it. So I'm not looking to "hire" anyone.

Here's my stuff, so far:
http://soundcloud.com/kill-it-with-science

What I'm essentially looking for, is someone with whiskey in their voice, you know, something kinda rough, but not too overly screamy. Think Phil Anselmo in Down, or this guy:


Or if your style is something else entirely, I'm okay with that, if it works with the musical style. Give it a shot if you want!

And if you're not a vocalist, take a listen anyway and give a comment on what you think of it!
- Cheers!
10 Comments

I made some music! (Tron Legacy edition)

Yo, you like Tron Legacy and/or Daft Punk?
Me too! And after rewatching Tron Legacy, I wondered if Daft Punk's End Of Line soundtrack would work as a rock cover. So I recorded this thing.
I have no idea how to take the song further though, so for now it's just a small snippet, but I'm fairly pleased with how it turned out.

I made some music!

So, it's saturday evening. I'm extremely bored and I've had a few beers, so I made this little make-some-music-in-1-hour project, and this is what came out of that little endeavor.


I want beer by Kill It With Science


It's just a small 1-minute track, kinda inspired by something like Meshuggah I guess.
Anyone else made some music lately? Post it here!
20 Comments

I'm in the games industry!

My first blog entry - Ooh, exciting! I'm not really into blogs and stuff, but for once I have something I feel like sharing, and this seems like an appropriate place to do it.

I have almost always more or less been aiming for a career in the games development industry, more specifically the 3D graphics part of games development. Now, I live in a tiny country with no real prominent game industry, so I have sort of been swimming up stream, so to speak, in regards to career path choices. None the less, I have stuck with doing what I love to do, which is 3D art and modeling, and have been working professionally as a 3D artist for some years, doing visualizations and animations. Not exactly a dream job in regards to what I set out to do at the start of my professional career, but it has been alright so far, and the career options doing viz stuff are a lot safer, so to speak, so now, at the age of 28, I was starting to think that I should just focus on what I'm doing now and give up the dream of working with games.

But last week I was contacted by a games studio who had noticed me, and offered me a job. I'm pretty stoked about it!
The studio is small potatoes, but as anyone who have ever looked at job applications for bigger studios know, it's almost always a requirement to have had 2-5 years prior experience in the games industry, so this is a big step in the right direction for sure. Now I have a foot in the door.

So yeah. There's no real point to this story, other than me being excited and wanting to tell someone. But also to say that it's never too late to pursue your dreams, with persistence and patience, sometimes they do come true.

... Yeah, that last part was kinda cheesy, sorry 'bout that.

Blogs Created:
4 blogs
Most Commented blog:
I made some music!
Total Comments on blogs:
53 comments