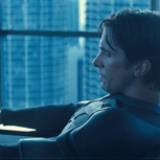 "The Dark Knight" is a dark masterpiece that will leave your stomach in knots.

"The Dark Knight" picks off were the first left off. Once again we see Christain Bale don the mask and suit of the feared Batman. Gotham, his home and the city he protects is slowly beginning to clean up. Under the lead of the new District Attorney Harvey Dent (Aaron Eckhart) and the excellent and tough police work of Lt. Gordon (Gary Oldman), crimanals big and small now fear the night, but peace will not last, it can not last in the Gotham Batman has created. As if straight from hell a new face of evil has emerged, no back story, to name just a scared face and a sadistic laugh. The Joker ( Heath Ledger) has slowly and skillfully gotten control of top crime lords of Gotham and is causing chaos throughout the city. Batman must face a new enemy unlike any he has ever fought before. It will cost him more then he may be able to handle, and his job as the symbol of good and justice is threaten.

I will begin with The Joker. Never before has there been a villain like this in any film ever. Heath Ledger has created a man who will haunt you in your dreams. Ledger truly put his all into this character. The walk, voice, laugh, its all his. Many have spoken about a possible Oscar nomination and I say it now he should win. It saddens me deeply to know that he is no longer with us, to know that he is not around to hear the praises for his work, which was truly remarkable. He did so much with his character it is amazing,in some scene he left you cringing, others he left you laughing hysterically and then the ones he left you down right shocked and scarred. One scene in particular, although short got to me, I felt light headed, it was just such an amazing scene but I will not go into any spoilers.

As for the other actors to appear, each gave it there all. Bale once again got right back into the role he was born for as Batman and Bruce Wayne. Michael Caine was stunning for the few scenes he was in, bringing in a lot as Alfred, Wayne's Butler. Gary Oldman, like always was great, and no matter how good he is at playing a villain, playing one of the heroes is the role he was meant for. Maggie Gyllenhaal was a very good choice to replace Katie Holmes as Rachael Dawes, bringing a new level of talent to the character. Aaron Eckhart was also the best he has ever been, as Harvey Dent, Gothams White Knight, and as Two Face he shines. And I cant forget Morgan Freeman as Lucius Fox, head of Wayne Enterprises and the man behind Batmans toys.

The film is very dark. Morality is tested in many ways. The Joker, as sick and twisted as he may be has a method and reason for his madness. Him and Batman are not just fighting each other, but also testing there own and the citizens of Gothams will to overcome. It does also touch upon many fears we do face today. Terror and mayhem rein supreme in this film.

I feel like this review has not done the film justice. It is almost too good to describe in words. All I can say from my own heart is that I went in with high expectations and they were exceeded. This really was my favorite movie of all time. Yes that word is thrown around a lot by many people about many films, but for me there is no denying it. It took my favorite genre of film, crime dramas, added in a villain unlike any other and mashed it into "Batman Begins". It was so enjoyable to watch, and did have the feel of "The Godfather", "Heat" and "The Departed" along with "A Clockwork Orange".

As shocking as this may seem I will say it now, I do not want a sequel. That is right, as much as I loved this film I know that it can not be surpassed. The ending was probably the greatest I have ever seen, and the way the ending was brought about left me so satisfied as to what was to happen that I do not need to see another film.

Overall it will leave you in a total state of shock and awe, your stomach will be in knots. Heath Ledger delivered an Oscar worthy performance and I am sadden he is not still with us. This film will linger in your mind long after the credits roll. Do not pass up the chance to see this film in theaters. No other film has left me feeling this way. Like I said before no words can really describe how great it was. Without a doubt the best film of the year, the best film of the decade and for me, the best film of all time and not surprisingly a huge 10/10.

*In memory of Heath Ledger*