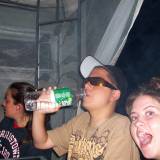 So, with my new job, comes my first paycheck. $140..but do to tax I get $116. Not bad for my first paycheck, I was expecting only to get around $60 with my training hours, but it winds up they paid me for my other work days as well. Well, with that money, im actually not buying any videogames. Im opening up a bank account later on today and probably putting in about $100..leaving me with $16 plus another $10 I already had. So, i'll be walking around with $26 in my pocket and $100 in the bank. So you may be wondering, well then how come this blog is titled, "$60 Game + Greatest Hits game = ....." Let me explain..

A couple of months ago, I wanted to get a digital camera. Why? Obviously to take pictures and stuff. I needed new pictures for facebook, as well as vacation was right around the corner so I figured i'd be taking lots of pictures since i'd be going on vacation and stuff. In the end, I bought a Kodak camera for $150. I used it a lot, it took great pictures, great videos..it was a really good camera. I say WAS because something happened to it. Ya know when you turn some cameras on..the lens type thing kinda pops out? Well, thats what my camera did. The only thing is, it would automatically go right back in after I turned it on, therefore my camera would automatically shut off. So, I brought it back and they told me to try and charge it because it may be dead. So, I did that and they also tried as well. No luck. The guy at the store gave me a gift certificate to the store (BTW...the store is Target) for the price of the camera. It's been about a month now and I still haven't gotten around to buying the damn camera back. Why? Let me tell you...

I've gone to the store twice now and my mom has gone once. The first time she went, they told her that they discontinued making that model. So, I went to the store and they still had my model on display. I told them that I would like to purchase it and they told me that they were currently out of stock and to come back later on in the week. That I did..but this time I saw another camera I liked and it was for cheaper. Guess what? They discontinued making THAT model as well! So, at this point im fed up and just say to myself whatever lets try getting the camera I originally came for. So, I asked the employee for that camera and....it's still out of stock. Now, summers over, I got all the pics I wanted to get, and basically am tired of waiting around to get a camera. So, with a $150 Target gift card laying around, I think my PS3 is in some need of games! Here are two different scenerio's im looking at:

I need help deciding, so I was hoping some of you would provide me with some opinions. Not many of you comment on my blogs, so im not even sure how many of you read this. Hopefully, this particular blog had a lot more of you reading and will therefore make you comment on this one..this one is probably the most important since it is involving MONEEYYYY! So please, opinions are very much appreciated.

Blogs Created:
5 blogs
Most Commented blog:
Getting to know you
Total Comments on blogs:
13 comments