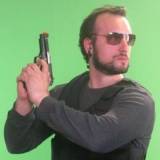 Norris describes his childhood as downbeat. He was nonathletic, shy, and scholastically mediocre. Other children taunted him about his mixed ethnicity, and Norris daydreamed about beating up his tormentors. Norris mentioned in his autobiography that his father had a very serious problem with drinking and "wasn't there" a lot for him growing up. Norris admitted that he loved his father but did not like him. However, he professed that he only felt pity for the man because "that was just how he was, and he missed so much."