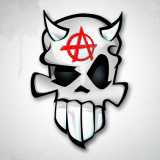 I know I haven't updated this blog in ages, but today's incident makes me feel that I really need to put this out there.

I opened the door this morning to my roommates wife (they were separated) who wanted to know if he was home. Upon checking I told her he wasn't. She wanted to come inside and wait for him. But I refused saying that I don't really know her and can't let her in. I closed the door and went back to my room.

Later in the afternoon I opened the door to a slew of firemen who asked if everything was alright. I unknowingly answered "Yes, everything is fine. You can come in here and check if you'd like." The fireman says "This lady is looking for her husband who she claims has hanged himself in his room." To which I almost laugh, because there is no way he would kill himself, I just talked to him yesterday. They come in, I show them his room. The fireman knocks on the door and then tries to open the door. To my surprise the door was unlocked. He enters takes a look and yells "Yeah we got a code blue in here". Another fireman walks across me and says "Why did you say nothing was wrong?" I am a loss for words and this point and barely mumble out "I wasn't aware of what...."

The cops get here, take me out of the house, ask for IDs and ask if anyone else is in the house. I tell them there is another guy who should be home upstairs. They get him out of the house as well. So at this point, one of the cops takes me with him and asks me to take a seat in the backseat of his cruiser. He starts asking me all sorts of questions and once again berates me on why I didn't let the wife into the house when she wanted to.

After what has been an hour, one of cops comes up to us and says that they have to treat this as a homicide until the coroner gets here and we weren't allowed to go back in the house until then. He says that it would take a few hours and that we should make arrangements to stay elsewhere. In the few hours waiting outside the house, I begin to think that I am at fault here for not letting his wife into the house earlier in the morning. Maybe if I had, he wouldn't be dead right now. I am still feeling guilty. I still feel responsible.

Eventually the coroner gets here, goes inside the house. The homicide detectives follow him in. After half hour or so they come back out talk to the wife. The detectives leave, the coroner leaves. One cop stays behind and informs us that we are free to go back into the house, just not in that particular room. I am not sure exactly what is going on. They say the coroner's services will come back and take the body to the hospital in a few hours. That still doesn't tell me if they concluded the investigation or what happens next.

Blogs Created:
6 blogs
Most Commented blog:
Been a while...
Total Comments on blogs:
5 comments