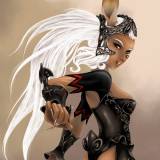 I guess quests aren't retroactive (I'm sure that'd be hell to program), but this is just to get the quest for writing a blog entry.  Since I'd written one a while back, I don't consider this cheesing the system.

As an individual whose gaming career began with exposure to some of the greatest games of all time, (Street Fighter II, Sonic II, and Final Fantasy were the first three titles I ever played), the last dozen years or so have been disappointment after disappointment.  Sure, there have been some awesome releases; but as genres get more and more narrowly defined, and honed, games start to look more and more like one another, and even the good ones just do "it" better.  I was so hungry for something new that I started playing games in genres I didn't even like, and random stuff I'd find on discount racks, (No One Can Stop Mr. Domino, etc.).  Eventually, I gave in, turning into that Halo-playing, Guitar Hero-evangelizing kid who'll lay down $60 for the next iteration of whatever.

Fast-forward to this year, and, just like any good Giant-Bomber, I watched the Endurance Run with baited breath.  Like many, I picked up the title after about a week of watching Jeff and Vinny make their way through the first dungeon.  I wasn't expecting a whole lot, telling myself it was probably just a solid JRPG with above-average voice-acting, and a nice hook.  Indeed, even after sinking about 10 hours into it, that's all it was shaping up to be; yet, this would eventually be the title that would rekindle my love affair with gaming as a medium.  So, what changed?  Any devoted follower of the Endurance Run can probably already guess, but this was the first time in over a decade that I felt myself emotionally invested to a game's cast.  What so many games try so desperately to achieve with high-profile voice-actors, 'cinematic' cutscenes, and 'immersive' graphics, this last-generation JRPG brought to you by the publisher that brought you Amazing Tater has outshone them all.  As someone who only recently graduated high school, it was amazing to see just how spot-on they were, choosing to opt-out of the conventional androgynous protagonist, and buxom damsel-in-distress for a homosexual street tough, and a detective rubbing up against the harsh societal prejudices that still force gender-specific occupational choices.

Still, personality isn't always enough.  What SMT: Persona 4 does brilliantly is force you to care.  While offering only a seemingly superficial incentive for fraternizing with the multitude of other players caught up in the midst of this drama, it's enough for you to give every plot-line a chance to evolve and develop organically until you actually find yourself wanting to hear more regardless of what the gameplay benefits are.  As weirdly sad as this sounds, you develop relationships with these characters that are almost akin to real friendships, (see Vinny bummed out that Nanako got thrown into the TV).

But, as much as it may seem, this is not so much a love letter to Persona 4 as it is a plea to would-be game designers and developers.  Make me care.  Give me a reason to identify with your character, don't just tell a compelling story.  Don't make my harmatia a weakness, make it my strength.  Do whatever it takes to make me powerful, but helpless, even if that includes killing the protagonist off mid-game if that's what it takes.  Sacrifice high production values to spring for a better writer, and most importantly, don't be afraid to have imperfect personalities, people that don't fit stereotypes that people find pleasing, or 'normal.'  It adds a depth that is the reason why some of us play games.