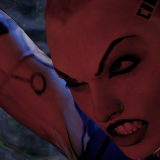 Oh adventure gaming. Remember the late 80's early 90's when you and I were so close. I've missed you these last 2 decades and your resurgence sure is a breath of nostalgic air.

With the popularity of the telltale MI and the 1st remake, it was inevitable the 2nd game in the MI series would get polished up and re-released. This one looks a lot nicer than the 1st remake, and this one has commentary from Ron Gilbert, Dave Grossman and Tim Schafer to boot.

I've never done one of these but I've watched quite a few. I looked on the past 10 pages of LP's and didn't see this game yet. The original game is also far older than 3 months old, so hopefully I haven't missed any other rules

I'll be recording this play through with fraps (pro version so no watermarking or anything) and putting the videos up on youtube (so they will be in 10 minute chunks). I'm playing the commentary and recording it as well. If there is anything you want to see or you want any specific screenshots just let me know and I'll take them.