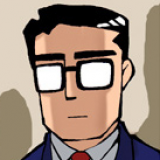 That wasn't so bad.

With the new Batman and Wolverine games coming out it is a good time to be a fan of comic books and video games.  Each one looks to improve on concepts introduced in previous games while still being fresh and new.  An M-rated Wolverine game?  Excelsior!  Kevin Conroy and Mark Hamill returning to do voices?  Holy Acting Batman!  Clichés aside, both games are looking pretty good.  What could be better?  A Dark Claw game.


Let’s backtrack a little:  In 1996 DC and Marvel Comics teamed up to form Amalgam Comics.  Comics published under this title took place in a universe that was a mixture of the two company's universes.  Some of the characters created were Dark Claw (Batman and Wolverine), Iron Lantern (Iron Man and Green Lantern), and Amazon (Wonder Women and Storm).  Every main character was represented somewhere and it was a pretty cool idea.  Sadly the publisher disbanded a year latter, having published 24 issues.  There was also the DC vs. Marvel series , which was much more like Marvel vs. Capcom or Mortal Kombat vs. DC Universe in nature.  While the publisher was short lived, Dark Claw is arguably the coolest thing to come out of it.  Combining Batman and Wolverine was a great idea but its too bad he was so short lived.  I'd personally love to see him be relevant again and what better way than a game?  (Probably a comic book).

I'll set the record straight: this game is EXTREMELY unlikely.  DC and Marvel would never agree to work together, as Amalgam Comics was a one time deal.  Each company is constantly trying to out do each other, whether it is at the box office or in the next Earth shattering "event".  Trying to get the rights for this game would be a nightmare in itself.  But I think this game could work based on the idea that it is WOLVERINE AND BATMAN!  Each character is wildly popular right now and have huge fan followings.  Besides, who wouldn't want to play as both characters at once?  From Batman you get loads of money, a secret hideout, a sidekick, high tech gadgets, detective skills, and mastery of all forms of combat.  From Wolverine you get a healing factor, adamantium skeleton and claws, heightened senses, and amazing agility and reflexes.  The gameplay opportunities are endless.  The game itself could start with Logan Wayne's back story, including being submitted to the Weapon X program along with future nemesis Creed H. Quinn (Hyena, combination of Joker and Sabretooth).  After Weapon X falls apart you go around the world and learn various combat and intellectual skills, acting as a tutorial of sorts.  Then you return to New Gotham City to start your war on crime all while trying to stop Hyena's sinister plans.  Other characters from the universe could make appearances and help you out along the way such as Dark Claw's sidekick Sparrow or the Judgment League Avengers.

While a Dark Claw game would be nice I guess I'll just have to settle for Arkham Asylum and Origins.  Even if both games turn out great there will still be lingering thoughts in the back of my mind.  I'm sure I'll come across situations in both games where having the other hero's powers would either make the moment easier or more fun to play.  But oh well, such as life.  A guy can dream, can't he?