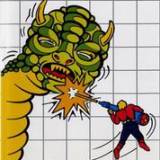 No - I'm not talking about the midget hooker and her 3 rabbits I met in Reno.

I'm talking about Hypership Out of Control - a quiet little Xbox Indie game that surprised all of us.

The concept is simple - drop 4 player controlled ships in a progressively fast shooter (or shmup if you must call it that). The game speeds up wave after wave, while you and you're 3 friends do your best to dodge and shoot crap out of the way to survive. The occasional power up will wizz by you if you're not quick enough, and you can dash left or right using the bumpers to make narrow escapes. It's all done from a top down perspective, and made up of bitastic old school graphics.

Even the soundtrack is awesome - a simple little chiptune that you'll be humming in your head for days after.

Anyway - this got me thinking how much money one could save while still being a gamer. The indie scene is really pumping out some incredible games. Protect Me Knight, Crossfire, the Bit.Trip series, Super Meat Boy, I Made A Game with Zombies in it, Explosionade, - the list goes on forever. And these games are usually 1-10 bucks!

Granted - you have to have an appreciation for games to really enjoy these - your friend Brock who's really into Modern Warfare might not be able to get past Treasure-Treasure's gameboy-esque graphics... but that's there problem.

The thing that sucks is the lack of exposure these games actually get - the Indie Marketplace is certainly not easy to navigate, and the spot light only hits games like Bit.trip Runner on rare occasion. I kind of wish Indie developers had there own console.

Well - the moral of this story is more gamers should pay more attention to the indie scene. You'll get a crapload of awesome games - most in genres that are being ignored by the big companies, and you can get 30-50 games for the price you just paid for Medal of Honor: Beard Wars.

A neo-gaf member by the name of "toysthatkill" does a great job roudning up his favorite XBL Indie games every month. Check him out here: http://www.neogaf.com/forum/showthread.php?t=408911

Game Pack 11 - the Game Pack that would hold the Jackal.

But instead of the Jackal - we GameRoom faithful get jack.

What could have possibly gone wrong with GameRoom? The idea was sound. Create a virtual arcade and release very old games for too much money. Fine. I'm in.

A glitchy interface, waning support, craptastic games and now to top it all off - we are just being flat out ignored.

At the very least, MS should post SOMETHING as to why the service is being ignored. My GameRoom keeps advertising that Game Pack 7 is coming soon! WTF! Now they go ahead and skip releases.

I'm bitter and need the blog achievement. Going to play Super Meat Boy and keep checking back for Jackal.