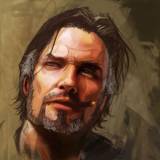 Halo is "full of bullshit" - A quick look at FPS storytelling

Do you remember the writer,Richard Morgan, from the recent Crysis 2 interview Brad did ? Well, he's been saying some not-so-nice things about the Halo franchise. According to him, Halo is full of "bullshit archetypal characters" [Link]. Quite an inflammatory comment and I won't be surprised if he did it as part of a deliberate marketing strategy of some sort to attract interest towards his own product. Anyway, he does raise a valid point that Halo's storyline is very played out.

While there is no excuse for not having a better story, I think authors have to look at games from a different perspective than books or movies. For me, the biggest strength of a video game is making the player believe they are the author of their story. This is the reason why I appreciate choices in my RPGs, even if the end result is cliched. And when you're delivering a linear story like Halo, you have to trick the player into believing that they are in total control of what is happening on screen. The most memorable sequences in games are the ones where the player is directly in charge.

In first person shooters, this is usually accomplished by giving the players a rich environment to explore and filling it with clues or interesting objects with narrative value. Combat Evolved does this well. I haven't touched the game since 2003 or so and I still distinctly remember the first time I crash landed on Installation 04 and stumbled into this vast ecosystem. It's a very cliched scene with the mountain cliff and the waterfall. But since it was a game and I had the chance to explore this surrounding myself, I remember it more than any movie's watefall/cliff scene. In cases like this, there is no need for clever words or witty writing when the environment itself can make such an impact.

Morgan criticized the characters and I'll definitely give him that. But if you analyze the narrative structure of shooter games, there is a very specific need for such archetypal characters as well. In most good FPS, you're also usually given a sidekick to help you understand what is happening around you (Alyx in HL2, Cortana in Halo, Atlas in BioShock, Price/Others in Modern Warfare). These characters are essential in getting us invested in a fictional world and they all become archetypes by necessity. These companion characters need humor, intellect or a sunny personality to make the experience enjoyable. And I think Cortana is very good example (though not the best) of how to do it right. The Arbiter is another good character and someone I liked immediately. He fills the archetype of the old enemy turned friend but the fact that players actually control him in co-op makes it more than his movie/book counterparts. A lot of this is down to execution and Bungie did a good job of making me like these two. Master Chief and Sgt. Johnson on the other hand are just lazy and they could have done better.

Anyway, my closing thought is that labeling Halo's entire cast as "bullshit" is just extreme and unwarranted. They are archetypes but they are well executed archetypes. If Morgan truly believes what he said, then Crysis 2 better set a new standard for shooter storytelling. Nothing against CryTek (I love their games) but he is just setting himself up for a hard knock back to reality here.
56 Comments
Load Comments