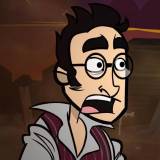 The first few missions of this game made me feel like a moron. I didn't know that different types of salvage have different salvage points, as the game never tells you that there's a processor and furnace in addition to the barge. It does display the salvage point when you have an item grappled, but that isn't explicitly stated and the HUD is so busy that I didn't notice, much less parse that information.

Cut points can only be cut when the reticle turns red over them, but that's not stated. I spent several minutes trying to cut a point from just far enough away that the reticle didn't turn red, wondering what I was doing wrong. I tried cutting vertically, horizontally, letting the cutter get to the overheat point and then backing off multiple times, until I realized that no, I just wasn't close enough.

These are my two biggest gripes so far. I played just under an hour last night and ran into the exact same issues. I was actually planning on looking up which items go to which salvage points before I played again, then I watched this Quick Look. I can admit to missing the data on the HUD, but also glad I'm not the only one!

Other than that, it's a cool concept that I dig. The upgrades look fun and I hope a modding community springs up for this game.

After failing the tutorial 5+ times due to tossing the Antenna into the Furnace, I looked it up in their Steam Forums. Yes, the HUD tells you where to toss it. BUT IT IS NEVER CLEARLY EXPLAINED (All caps for emphasis. Not angry voice.) That HUD section is also a lighter color that easily blends into the sun-lit hull you're floating over. Gee, wonder why it was hard to notice? The materials/item HUD section is very important and with only 3 places to toss things, easy enough AFTER you know what you're doing.

They definitely will need another pass on the tutorial to better familiarize players with what is being presented.

Random aside: Don't forget the ships come per-pressurized! I was taking a Mackerel variant apart and I melted the cut points for the ceiling cargo doors. BHOOOOOOSH went all the air out into the lovely vacuum of space. Luckily I was to the side and had a good laugh over it.

Also, I do about 2 ships per session and call it done for the day. Very relaxing, but I don't want to zip through all the content super fast.

Been following a blog for years, waiting for the cat adventure game. Now looking forward to never playing it if it never escapes the prison of Sony.
https://hk-devblog.com/

Hoo boy... looks like they're playing with expanded material while just trying to play a base game of Deception. Just guessing from looking at the scene tiles (I'm currently 22 minutes in the video.) compared to an all components pic (link) I found on BGG.

And some quick thoughts - Pulling Rank in the Cage. Getting Cage-y in the Ranks.

While I so want a Jeff & Brad playthrough or a Vinny & Brad... I think what I would really want would be a Jan & Jeff.

Also, I just can't imagine playing through SR3 with a controller.

Just started watching and read the comments before hand. If this is Old Anime era (Millennial Reckoning), I must be from the Ancient Anime era. Shout outs to Dragon Ball, Cowboy Bebop, Trigun, Outlaw Star and Serial Experiment Lain (Not Toonami but in the same time frame for me).

@the_nubster: Interesting. I'm pretty sure I didn't play it in the launch window and was probably years later, but I know I never had any problems with KBM. But we're talking PCs here. Who knows.

Was this game not on PC? I thought I remember having it on PC...

It's on PC. Played through it many years ago and it was definitely on PC. And just checked Origin, it's there. Probably also on Steam at this point.

THERE. ARE. FOUR. CORNERS.

Also, just wanted to congrat @ripelivejam on reaching a great post count. And 70 hours a week?! Hope you're getting enough sleep and staying health, duder!