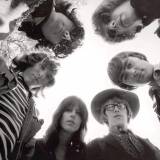 Hello! Gamespot refugee here, loving this new site. I used to play a lot of World Of Warcraft but have recently stopped, probably pick it back up around WOTLK. I love the original guitar hero series(so that means 1,2, rock band 1, rock band 2). Not a huge fan of GH3 nor am I looking forward to GH:WT. Fan of RTS like Company of Heroes and the Total War games. I'm not very good at them but I love them. I also enjoy shooters, favourite has been BF2 though many gaming memories from that game. I also play GTA 4 on my 360. Music wise I'm mainly listening to psychedelic and folk rock. Favourite bands are Jefferson Airplane, The Byrds, Country Joe & The Fish, The Doors.
Games playing right now: GTA 4, Spore Creature Creator, Rock Band 1.
Waiting on: Spore, Rock Band 2, The Sims 3.