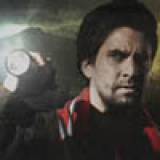 I haven't seen this movie in over a decade and while it's not great, I still REALLY enjoyed it. I never really noticed the flaws the movie has until now. Some of the acting is not great, except for Sam Neill he was great in this, and it does that 90s trying to be scary stuff like flashing lights and loud bangs. Not to mention the fact that it can get so loud you can barely hear the characters. It's also has a surprisingly slower paced than I remember. The GOOD stuff doesn't happen until an hour into the movie and it's a 90 minute movie. So the GOOD stuff is in the last 20 minutes. I would rate it 7.5/10. Event Horizon is one of the movies I hope gets the Shout Factory treatment and if by SOME miracle they find the 130 minute version.

"Where we are going, we won't need eyes to see"

A Fantastic movie. Not only was the movie fast pace, so was the jokes. Both Finding Nemo and Finding Dory really did a unique thing to keep the pace that fits the character. Nemo is a slower movie, but that what fits with Marlin. With Dory and her high energy, Finding Dory moved quick.

@jec03:There's this idea that bands like The White Stripes & The Strokes got rid of the distortion of nu-metal and brought back rock songs that had clear, upbeat melodies and guitar solo's. No bullshit effects or theatrics, just a band and their instruments playing 'clean' 3 min rock songs. They are seen as the blueprint for (indierock?) bands like The Killers, Arctic Monkeys, Kings of Leon, Franz Ferdinand and Yeah Yeah Yeahs.

Rolling Stone famously called the Strokes the saviors of Rock & Roll, and that's something you will still encounter in reviews whenever The Strokes release new music.

Here's an article i found

Looking back on the debut of the strokes

I heard that song recently and forgot how great that song is. Modest Mouse comes in mind, mainly because they are my most favorite band. I do love me some Korn though.

If you're into that genre of music I recommend Land of Talk and Wolf Parade.

I think it was around 2004 where I stopped focusing on genres. In most of the 90s I was All Country all the time, then by the late 90s early 00s I was getting into Rock, mostly through bands like Korn, Limp Bizkit and Slipknot (take a guess which one I don't listen to anymore), but while I was listen to those bands, it started to blend where I didn't care about genres. I could be listening to Korn's Life is Peachy album one minute and then Matchbox 20's Mad Season right after that. If I liked it, I liked it no matter the genre.

I guess what I'm trying to say is that I don't know what came after Nu Metal. I stopped caring, and if there was something after it, I wouldn't know. I just like what I like regardless of genre.

My review of Hitman GO

This collection has what was missing in Drake's Deception the most, tweaks and skins. I've been wanting to play as London Drake for the longest time, and if I read it right, it seems I can play as London Drake in all three games, and that to me is awesome. I'm more excited about that than the new modes.

I sometimes replace the tranq gun with a lethal gun and my sniper with either a loud lethal sniper or a launcher.

The other team scored in the final second of a 0-0 match.

I'm not that far into the game but the few female characters I've encountered in the main story pretty much seem to exist as someone for Geralt to fuck. I haven't actually met up with Ciri yet but I liked her in the flashback sequence so I'm anticipating that she'll be a little more fleshed out on her own.