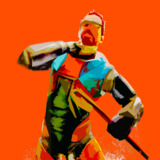 I would like to see more full playthroughs of games on features like Playdates and such. I fell off the Resident Evil remakes pretty early, and I never liked RE 4, but watching Abby play those was awesome.

But the real answer is Demo Derby. Especially once Jeff started being on those, the combination of nostalgia and his industry knowledge is one of the best things ever on the site!

The main distinction for me between this and Souls games and Bloodborne is that those earlier games gave me a sense that my weapon was an extension of my character, like in a Monster Hunter game. You were one with your chosen death machine of choice; its effectiveness depended on your mastery of its unique movesets, speed, reach, etc. This gave individual players a way to choose something that worked well for them. Everyone has a preference when it comes to these sorts of things, and it seemed like there was always something there that would 'feel' good to anyone (assuming they experimented enough to find their groove).

Sekiro throws all of that freedom and improvisation out the window. You will either play the game the way it is meant to be played, without any option to lower the difficulty in the case you might enjoy other aspects of the game aside from it's combat (story, aesthetics, etc.), or you will fail and do something else with your time.

That's not an inherently bad choice or anything of course - not every game should be an RPG - but the main reason I liked the previous games was because the combat felt good, at least once I found a niche I enjoyed. Very few other action melee games have given me the sense that my weapon is a real object in the world, rather than just an animation that plays when I hit a button.

The first achievement is great/terrible:

Seems to me like the current 4K character models and AI-upscaled cutscenes available via PC mods already look as good or better.

Have they said anything about gameplay changes?

I agree with all the points made here, but as a nature documentary junkie and a fan of YT channels like TierZoo (which I discovered because of Ben!), I absolutely adored this game. One of my favorites from last year.

This was a fantastic read! I have a similar feeling about the Game of Thrones TV show - my mom and I would watch it together every Sunday like a ritual. I'm actually quite glad the show turned out in such a way that I would never want to revisit it again anyway.

The Disturbed live album recorded at Red Rocks in CO is fantastic.

Also, the Filter version of Crystal Method's 'Can't You Trip Like I Do' is like musical junk food, so good.

Worked on me, just picked up Titanfall 2 finally and I'm having great time with the coop mode. Was worried that it would be tough to find a game, but there even seems to be plenty of new players like me to match with.

New player here, loving it so far, would be even better with some duders alongside! Me llamo: bignucleus