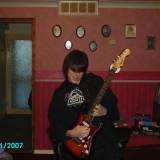 
I started blogging about this but I changed my mind and I think it works better if I just leave it at the title... :)
1 Comments

I have nothing to blog about...


I guess I will blog about that then xD


These quests have overrun me, my quest to be a moderator is going to take a very long time xD

I have been doing thse goddamned things for exactly 12 hours now and I got less done than I would've hoped... :(

What a fun day yesterday...


Like fuck, no one should ever have a condition that puts them in a hospice :(  At least these bloody quests are taking my mind off of everything xD
1 Comments

After discovering this new quest system last night I was in awe at the creativity and clever methods of improving the popularity of their website.
I began clueless to the whole the thing and didn't understand it at all but once I found the quest tab (duh ¬_¬) I became quite addicted as I'm sure a fair number of people have become.

I have always been a completionist even before the xbox 360 achievement system with the ps2, ps1, gameboy etc. I always felt the need to "Catch 'em all!" and get a beautiful '100%' appear on my screen. When I bought my 360 and became familiar with the achievement system I became more of a completionist and would spend hours even after completing the main storylines and side missions or whatever, to get that beautiful 100%.

Then when I saw this quest system I was overwhelmed with temptation to complete all of these :O I have found these quests more addicting and more fulfilling than my achievement hunting. I think GiantBomb have truly outdone themselves this time. A HUGE well done to you :) And a huge thank you as well :)


Right, I have just recently joined this site and I have synchronised my achievements from my Xbox Live profile to Giant Bomb. Since then I have, of course, been playing more games and unlocking new achievements, these new achievements have not been showing up on Giant Bomb. It's been a few days now so I'm assuming it doesn't update automatically... but I can't see any way to update them! It's moderately frustrating :P
8 Comments