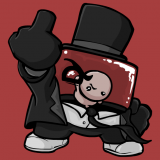 I started Yakuza: Like a Dragon early December-ish and just wrapped up getting all the achievements a few days ago. What a fantastic game. Love Ichiban and the whole cast, what a bunch of goofballs and all around fun characters. I really, really dig the switch to turn-based JRPG action. As much as I love the other Yakuza games, I was never super advanced at the brawler combat and just cheesed most the difficult fights.

Can't wait to see where they go with future games. Until then, I'm going to replay them from 0!

No real Arcades, bowling alley had some games though. My allotment was: "Go pretend I was playing the demo versions on loop"

Due to the recent Castlevania Advanced collection I had a huge itch to experience the Castlevania games I missed out on, which were largely these Lords of Shadows games. So I ended up buying all 3 on the Xbox and burning through them. I enjoyed them for the most part but I felt that, in the first game at least, the main character's voice acting is just so bad. It really took me out of liking him as a character. I was happy to discover that I liked him a lot more in Lords of Shadow 2, since that character has a lot more emotion to go off of. Gabriel in LoS1 is just dull as hell and made caring about his quest very hard.

Playing these "old" games brought me back face to face with something I hate about the current digital landscape. While it is great to be able to play these older generation games on the Xbox, and they were super cheap, the DLC for LoS1 and 2 were not and it sucked so much. As someone with a dumb completionist mindset, I wanted to see both DLC packs for LoS1 before moving onto Mirror of Fate. Due to the fact old game DLC is almost never discounted, those DLC cost me more than buying Lords of Shadow 1, 2 and Mirror of Fate cost all together....and they were very bad!! I was super disappointed in both the DLC, for offering not much story to go off of to bridge the events of LoS1 and the next 2 games, yet offering just enough lore that I "had" to see it or I'd feel that nag in the back of my mind forever.

Oh well, on the flip side Mirror of Fate was only like 2 bucks, and I think that one was my favorite of the three games? It was a really neat mix of the older, 2-D exploration Castlevania is known for, while implementing the action combat that Lords of Shadow 1 (and later 2) had. I enjoyed that game a lot.

I loved 3's ending, though I had no experience with 1 or 2. My love of it was largely due to how out of nowhere it was, and also how it let the game get weird. Before that, even though it was called "Star Ocean", it was mostly planets that were generic fantasy-era and really disappointing. I think the series should have grabbed onto that ending and kept going with it in future titles.

Instead we got the major fucking disappointment that was 4, in both story and character design (not to mention English VA that is still the worst I've experienced in a game). I never even gave 5 a glance due to just how abyssal 4 was. Anytime I see people up in arms over Star Ocean 3 I can't help but gesture at 4 as the true culprit of the issues with that series.

Really fun game. Beat it after a little over 6 hours, not a super high item % completion but it doesn't look like there are any secret endings so not gonna bother getting more, as the stuff you find by sticking around the main path are more than enough resources to beat the game and any challenges it throws at you.

I pretty much agree with all positives and negatives I've seen mentioned by reviews. It looks amazing, feels great, is fun to play. Yet at the same time, feels a bit too "clean and sterile", the story is kinda whatever, and the music is really nothing special. I never played the Samus Returns remake so I can't speak on the how many of these things existed there and remain here or not.

All and all, if you like older Metroid games you'll likely enjoy this. If you don't care for them this game won't change anything. The price point is maybe a bit rough these days, 60 USD is a lot of money for a game that, for anyone who has played "one of these" games before, has roughly the same runtime as the older ones. Though I suppose the cost discussion rarely matters with Nintendo first-party games, seeing how even on sale you'd only really get it for 5/10 dollars less.

I still have yet to fill the void that Marvel Heroes 2014/2015 left behind, and am increasingly sad when each new Marvel game comes out and just isn't as good at offering what that game offered.

I didn't understand how to upload to the PSN Cloud well and thought it just auto-uploaded as a PS+ member, so I lost my Yakuza 0 save with a 90% done Completion Log upon upgrading from a base PS4 to a Pro a long while back. Was a major bummer, but maybe also blessing in disguise. Woulda dumped a ton of hours into those last few mini games to get that Plat, even if I wouldn't have been enjoying it.

I really dig the look of this game, as well as the atmosphere and the intriguing use of music for exploring, but I think I hate the combat...which makes me not want to continue playing this. I have 3 different versions of shoot now, but my issue with all of them is that: the game seems to give you little to no shot impact feedback. I have no idea if I'm hitting my target and more often than naught, it turned out I just unloaded in the direction of an enemy but didn't actually hit them and died.

I'm at my first boss which is a giant flamethrower spewing pyramid and I just had to turn the game off after constant death after death. I didn't even feel like I was scratching the enemy, yet if I got hit by a second of it's flame I was already down below half health. Oh and it's incredibly fast so even if I dodge, by the time I've brought my camera back around to shoot at it, the boss is already charging my ass with another flamethrower.

It's a real shame as the look and style of this game is top notch, but I don't think I want to struggle through the less-than good combat necessary to see more of the game.

I don't have much to say that hasn't been said, just adding my voice in agreement to most the issues brought up here. Long time sub that unsubbed when the Nextlander people split off, though I haven't been impressed with the website for a while before that, including times before Covid. There isn't much faith being shown for fans that the site will ever find that "normal" again, and to make matters worse Jeff almost feels hostile towards older fans that are asking when the site will get back to how it was. I understand things and people changing with the times, but there is and has been a feeling of disrespect towards fans who have been around here for the long haul, and as someone who was paying to support the site for a good long time, it sucks.

@deckard: It's the weird thing i've seen of late anytime you mention enjoyment of Gamepass or another subscription model in gaming, people will jump out of the woodwork to yell at you about how the value wont be there forever but you'll be locked in!!!

Like...no? I've had subscriptions before...if I don't use them or think the value gets bad, I cancel them. I've never been a person who just lets a subscription keep rolling even if i'm not using a service, or forgets I have one, so that won't happen with Gamepass either.

Idk, it's just bizarre how whenever someone talks about enjoying Gamepass due to value/new experiences/what have you, it seems to draw some interesting characters telling you that you shouldn't enjoy it.