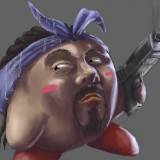 Be fresh, be hip, be new, be exciting, be accessible. All these “be” demands have dogged developers for quite some time. With gaming becoming a mainstream medium, many publishers have begun pushing for ideas that appeal much wider audiences. Games like Fallout, Diablo, and KOTOR are role playing games that have almost a cult like following. Whenever you mention these titles people are always overcome with nostalgic feelings of drunken all nighters pushing for that next level. However, what have the recent shifts in the industry done to our favorite games?

Diablo is a franchise that many people who play role playing games are familiar with. It’s a game that has been around for nearly a decade. It is a game characterized by dark corridors intermingled with rooms filled with bloody corpses hanging from the rafters, half naked women chained to the floor, grotesque insects, and many other dark themes. This dark atmosphere is what many fans of the series have come to love about the game. Over the years the game has evolved from an overly dark cathedral crawler to its current state; Diablo 3.

For those of you who haven’t heard, Diablo 3 was announced on July 29th and the World Wide Invitational in France. Fans of the series have been begging Blizzard for a sequel for quite some time, and to many those pleas were answered. However, some fans felt that the new art direction for the game didn’t match the dark overtones of the originals. Petitions were created, fan made art was presented, and Blizzard even chimed in at some point. Their words? “Trust us, this new direction is good for the series”. The new art direction for the game looks like a devil spawn of Andy Warhol and Magritte. The abstract themes and the colorful landscape are, some claim, in direct contrast with the older games. The, now former, art director for the game claimed that this new palette allowed the game from becoming a washed out mess of chunks of meat and steel. However, fans claim that slick textures and bright colors are going against the original titles. What is the truth here?

While Diablo is a mainstream RPG, there are also other titles that have met with criticism for their new directions. Fallout is a name that few know and many cherish. It’s a title that has grown in popularity since recent announcements that a third title would be developed by Bethesda. Bethesda is a developer known for their Elder Scrolls series. But can they really be relied on to make a faithful sequel? When the game was first announced, Bethesda made it very clear that they were going to, “attempt to remain faithful to the series”. However, over the course of a few months the fans have begun despising what Bethesda has done to the franchise, but what are they complaining about really?

Fallout is a franchise defined by its quirky dark humor, its satirical and light story used to bolster the atmosphere, its turn based game play, dark characters, and consequences that are set in stone for any actions that you take over the course of the game. What has been Bethesda’s answer to these game play mechanics? Throw it away. Many elements of the original titles have been left behind for an entirely new direction which a Bethesda employee has described as “Oblivion with guns, in all the best ways”. The fans of the series have become angry after not being delivered the faithful sequel that they were promised by Bethesda. In a recent statement by Bethesda, they went as far as to claim that the consequence system in Fallout was extremely outdated, and players shouldn’t have any kind of game restricting choices. This lax approach to consequences to actions has taken many fans of the series by surprise.

Fallout and Diablo have two things in common, they are largely titles that PC fans have loved over the generations. In order to put PC gamers’ fears into perspective we need to examine a console case of this phenomenon. Knights of the Old Republic is a role playing game for the XBOX. It is a game that has gained many followers over the years, and is herald as one of the greatest Star Wars games ever made. The quasi-turn based game play and focus on story in the game is what has attracted many fans to the series. With the recent announcement of a PC exclusive, MMO KOTOR title many fans have become angry. They have demanded a console-centric title akin to the older titles.

Now don’t get my post confused. I’m not preaching that these games are going to be bad in any way. Blizzard, Bethesda, and Bioware all have something in common, besides all starting with the letter B. These companies have a long history of putting out quality titles. Even if these games are seen as nothing like their originals, many people will still buy and enjoy these games. Even if you agree or disagree with the actions taken by developers, one thing is inexplicably true; Developers are taking conventional titles and changing them to match an evolving market.