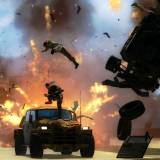 One thing I always thought the first game had going for it was that it was perfectly fine to play solo, even (just about) in the DZ. The main missions were generally better if you got some other players in, but it was also nice to do the side stuff solo.

With that said, it's also great how many ways they give you to connect with other players if you want to. For someone like me, who doesn't party up with friends, it really makes it the best of all worlds.

The Favourite: I don't really care for English period dramas but made an exception because this one was directed by Yorgos Lanthimos of Dog Tooth and Killing of a Sacred Deer fame. I loved it and it's easily the most accessible Yorgos movie plus Olivia Coleman is amazing as Queen Anne. Would not be shocked for her to win an Oscar for Best Actress and to see this movie win Best Picture. Third favorite movie of 2018 with my first still being Sorry to Bother You and second being Mandy. 5 out of 5

Saw this recently too. I agree that it is more accessible than Dogtooth or even The Lobster (I've not seen Deer), but it's still quite a niche film, I think. I find it funny that the advertising presents it as essentially a sort of restoration comedy full of bawdy and witty jokes, intended as a crowd pleaser. And that element is present, but the film plays with those conventions as well. There's a really interesting contrast between the mannered barbs that are thrown around in the presence of the queen, and the vicious nastiness that emerges when the mask slips.

What I think makes the film really great is that it isn't just a bluntly misanthropic vision of cruelty, although there is plenty of cruelty. It also presents a really nuanced exploration of power, and who is allowed to be cruel to whom, and how that cruelty multiplies throughout the court.

As with the Lobster, I think some people will feel they were sold the film on a false prospectus, but also like the Lobster, I think the film is a really fascinating and even handed exploration of the themes in a very tightly controlled way. It never lets itself pull back, and it never shows you something without considering its opposite.

Lots of great acting, too. Obviously Olivia Colman deserves a lot of praise for managing to convincingly portray such a wide range of conflicting personalities in one, and connecting them all in a convincing way. I think less obvious, but still great, is the way that Rachel Weisz and Emma Stone both show changes in their character - Stone moving from Naif (maybe?) to manipulative to outwardly cruel; Weisz moving from cold and domineering, to allowing us to see something of her motivation, to totally desperate. I found the performances incredibly convincing all round, which is especially impressive given that the script is quite broad about the characters in a lot of ways.

The camera work, lighting and mise-en-scene are also absolutely top drawer. A scene of Emma Stone moving around a library, with the camera following her is elevated massively by the lighting and the way the camera is controlled, moving from detailed focus of her face to wide tableau almost instantly. The use of natural lighting also lends a really effective distance between the daytime scenes and the night time machinations of the characters. Great film.

It was okay, but a bit of an oddity in the current landscape: It wasn't really slick or sophisticated enough to stand up to the big hitters of today's television, but it had such a focus on the overarching story that it didn't really feel like the the sort of Star Trek I love (TNG, basically). Maybe it feels more similar to Voyager and DS9?

In the end I think the closest comparison would be with Buffy, particularly in its focus on the imperfections of its cast, but also in it's pacing over the series.

This year’s Get Out. It’s a good movie that left me puzzled by it being declared a horror movie without featuring any horror or scares.

Get Out struck me as great social commentary, and maybe a black comedy or satire using horror framework (without the scares) to tell a story. It also wussed out on the ending. I knew something was wrong there, and found the original online after watching it. It’s a shame they changed it, as I found the original ending far more impactful.

Hereditary was closer to horror, but was almost more of a character study dealing with mental illness, grief, and mourning. I liked it, but was never once scared by it. Very well shot, very well made, and the lead was great. I’d actually watch it again in UHD, as I enjoyed the use of light, shadow, and color quite a bit in the 1080p-ish stream I watched. I bet it looks stunning.

These films are just part of a different horror tradition, I think - stuff like Don't Look Now, The Wicker Man, maybe even The Omen to some extent - which deals more with strangeness than scariness.

The ambiguity is about whether any of it is real at all. The plot of the film is exactly the same as the scenario Quaid picks out. Later the guy comes along and claims to be a failsafe in the machine for cases where people get trapped in the simulation/start to believe the simulation is real.

It's pretty clearly a deliberate element of ambiguity that's been included, however my general feeling with stuff like that is that if the film doesn't give you any indication one way or the other then you kind of have to just take the most straightforward narrative as "true." I think it's a fun little quirk to throw in but if you accept that as the "truth" of the film then there isn't really a story.

If the primary goal is weight loss, I would suggest (as a fellow traveller on that path!) first of all you get your diet in control - calorie counting is super important here. It's tedious at first but it quite quickly becomes second nature to think through what you eat a bit more. In the past I've tried pretty extreme/restrictive diets, but increasingly I think it's better to just try and eat in a way that is sensible and sustainable long term. Don't beat yourself up too much if you slip for a day - and don't fall into a spiral of eating shit just because you feel you've failed. You've just got to be aware of what your choices mean and what you need to do to counteract them.

As far as gym goes, I'm less sure, but I would say focus on cardio that you find difficult. I think it's probably more important to push yourself, whatever you do. If there's a park run near you I'd really recommend that, especially if you have a friend who can go with you and support you. It's only 5k every saturday but it really helps to give you a bit of a feeling of achievement, and a sense of your fitness improvement.

Above all, good luck and I hope it all goes well!

I mean, there's a lot of reasons why the OP is ludicrous, but one thing that stodd out is - bras aren't intended to shield women from male sexual desire at all. If anything, the opposite is true as they tend to sell themselves on their sexiness. Bizarre thing to say.

Absolutely gutted about last night. It was clear that our team had issues, and mostly the it's coming home memes were self-deprecating, but I had allowed myself a little hope - particularly as they seemed to be plugging the gaps with each game. The performance against Sweden was our strongest all tournament I think.

But last night - Kane was just missing in action. Goal aside Trippier had a sloppy game (even his goal, I think, was fortunate. I reckon Subasic was carrying an injury from the Russia game). Dele Alli seemed to be dead on his feet after 45, and I don't know how we got out-stamina'd by a team who had played two bouts of extra time in the knockouts. Decent defending after a lucky goal in the first half, but the wheels came off precipitously after half-time.

And although I think Southgate has done well, and is a breath of fresh air after a lot of shitty managers, his tactics were poor last night. Made some poor subs, and really needed to do more to switch up our tactics because we just weren't creating chances.

Edit: Also, the idea that we did anything egregious in our Belgium game can get fucked, tbh. Belgium made just as many switches for that match, and even if the draw had fallen differently it would have been a perfectly reasonable thing to do to give some players from the bench a run out. It's not like we did a Japan for the whole match.

That felt a lot more familiar than most of England's games so far.

If I'm being rational and realistic, it was nice to see that our defence was actually pretty solid, even when the team looked a bit ragged. I think there have been some worrying things about how we play at the back in our group games. Even when we conceded the equaliser, it's hard to see any howling errors in our play.

With that said, we just aren't dangerous enough up front, and we're relying way too much on set-pieces. I don't know what value Vardy is adding, either. You'd hope bringing him on would give us some pace, and some incisive runs into the box, but he just never seems to deliver. I swear he's offside way more often than most strikers.

But fuck all of that because we won pens and it's coming home.

Saw Isle of Dogs yesterday. It was enjoyable, but I can't help feeling that it's slightly less than the sum of its parts. It's beautiful, obviously, and incredibly detailed. The voice cast all bring something fun to the film. It's full of good jokes - I particularly enjoyed a sort of running gag where plot sequences would play out in very broad strokes while all of the dialogue explaining it was in Japanese. It felt like he was poking fun a bit at the normal hollywood thing of having long bits of exposition that boil down to "VIRUS CURED" or similar.

However, I just felt that the plot was a little bit too thin. The flipside to that gag I mentioned is that by boiling the narrative down to it's broadest strokes, it is really difficult to fully engage the audience's emotions. This in turn meant that there is a lack of emotional engagement in the middle of the film, which deals with Bryan Cranston's character learning to trust the little pilot. That's a really big problem for the film because it's kind of the heart of the plot, and it also means that the film begins to drag in the middle after a really zippy first third or so.

It's a shame, because there's a lot of wonderful detail in the animation, but I found myself appreciating these mostly from a kind of external, technical perspective, without ever really getting lost in it and luxuriating in it.

I'd give it a 3/5 with the caveat that it's a 3/5 that's worth seeing just for the stuff it does do really well, but I do think it's a bit of a dip for Anderson after a pretty excellent run of films from Fantastic Mr Fox onwards.