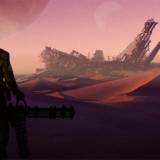 The other day I went by Vintage Stock and found a really nice boxed Acclaim Nintendo Double Player set. It still has the manual, warranty card, and advertisements inside of it, and the controllers are still wrapped in plastic. One of the controllers had 20 year old batteries in it that exploded some time ago, but I cleaned it up and it seems fine. The best part is that they were only $10. I saw a set there before that wasn't boxed and didn't look nearly as nice before for the same price. This was a really cool find, and one of the reasons why I love Vintage Stock. Sure, some of their stuff is kinda overpriced, but I have found some really cool shit for surprisingly cheap too.

I've been playing Fallout 3 lately, and holy shit is that game awesome. I was a little bit skeptical going into it because the only other Fallout I've played is the first one which is um, a little hard to get into these days, and the only other Bethesda game I have played is Morrowind, which I couldn't really get into. God damnit is Fallout 3 good though. Exploring the wasteland and fighting the various baddies hanging about is so much fun. I can't wait until this weekend when I'll have more than a couple of hours to sit there and play this game.

The last few mornings its been damn cold around these parts. I am not looking forward to the winter. Fall can stay around as long as it likes, but winter and its shitty weather can stay the hell away.
Anyway, there are too many damn games coming out right now! I'm still working my way through Fable II, but now Fallout 3, Little Big Planet, and Far Cry 2 are already out. During the Thanksgiving and Christmas breaks I'm going to try to just play games and do nothing else. Hopefully when I'm done with all the new stuff I can go back to Civilization Revolution. That game is amazingly addictive.

My wife and I took a trip up to Wichita, Kansas this week to see some of her friends and family up there. I managed to hit a couple of used game stores and found some pretty cool stuff.

I got some school money today so my wife and I finally got a new computer. Its nice having something that's eight times as fast as my last one. At Best Buy I saw a bin of final clearance games for $4.99 each. I picked up a few great games today. Harvey Birdman for PS2, because I sort of like that show, and I heard its kind of like Phoenix Wright, which I like more. Alien Syndrome for Wii, because I seriously only have four Wii games. Dead Head Fred for PSP, because I only have five PSP games. And finally The Golden Compass for 360. Hopefully The Golden Compass has some easy achievement points, that's the only reason I got that one. $20 for four crappy games isn't bad.

The last few days I've rented a couple of games for my PS3. MGS4 was finally starting to wear itself thin, so I decided to try something new. First up was Dark Sector, a Gears of War like game released for multiple platforms.

I remember when this game was first announced, many, many years ago. Well, I'm glad I did not actually buy this game. So many things are wrong with Dark Sector. For one the melee combat is absolutely awful. I have these zombie like guys fucking swarming me, and my guy has the slowest melee attack imaginable. It is so painfully frustrating. And what's the deal with every Russian peasant being buried with a wrench or hammer to use as a weapon when their corpses are reanimated? I'm a firm believer in a healthy suspension of disbelief when playing games, but come on.


I also played some Gran Turismo 5 Prologue last night and today. I am glad that I did not buy this one either. I haven't played a Gran Turismo game since Gran Turismo 2 on the PS1, but I have played other racing games in the intervening years. There are a lot of little things about that game that piss me off. For one, I hate it when racing games make me "get out" of my car if I want to sell it. Come on man, just let me sell my fucking car. The menu selection also feels sluggish to me, and I hate being kicked out to the main menu when I finish a race. Those extra button presses irritate the hell out of me, and I just couldn't do it anymore after a while. The graphics are lovely in 1080p, but something about them just felt sorta lifeless to me. I'm a huge fan of Forza Motorsport 2, and I think I'll just stick with that for now. Speaking of Forza 2, whats up with the auction house requiring Gold? I've been playing that game for a while, and I finally decided to try out the auction house now that I have amassed a fucking fortune in credits. I tried to bid on this crazy looking Japanese car, and I find out I have to have an Xbox Live Gold membership to do that. Thats fucked up man. Its bad enough that I have to wait a week to download demos and the stupid promotional gamerpics. I doubt that I'll ever use the auction house because I can never bring myself to pay for a peer to peer service.

My wife and I drove up to Edmond yesterday to run some errands, and we ended up buying a PS3. At Target they had a couple of the Metal Gear Solid 4 bundles, so we threw down the $500 and walked out with one.

I've been playing MGS4 for about five hours now, and I like it a lot more than I thought that I would. Its a beautiful looking game and I'm glad that I have the chance to play it now. I have played through Metal Gear Solid numerous times through out the years, but I never played a lot of MGS2 or MGS3. Maybe I'll go back and play through MGS2 when I get the chance.
In other news, my brother in law let me borrow his copy of Lost Odyssey. He told me he couldn't play it because it was turn based. I don't mind that so much, so maybe I'll like it more than he did.

I went outside today and braved the 102 degree heat to stop by the library and pick up some cat food at the store. I checked out the DVD of Ghostbusters when I was at the library, and I'm watching it right now as I make some screenshots. Holy shit, I forgot how cool this movie was. I loved this movie and its sequel when I was a kid, but I haven't seen them in ages. I'm really hoping now that the new Ghostbusters game has the same charm as the films do, particularly the first one.

Nice work guys. I can't wait to see what the future holds for this place.