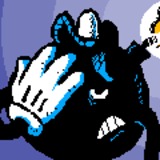 Tom Nook is an honest contractor. He will build you a house and let you pay for it on the honor system with no deadline.

Isabelle is the one to watch...

She finds a patsy off the train to gaslight into being the mayor. A puppet who's only role is showing up for sign ceremonies.

(edit: here she is caught on tape greeting her victim by suppressing his pleas that he is no mayor. His confusion may imply a train hijacking as well)

Presumably there was another mayor, one that disappears and is never heard from again.

Old Mayor, Tortimer knows. He's in exile, hiding on an island where she can't get to him.

Her puppy dog eyes have got you under her spell.

EDIT: The responses seem to have been focused on Nook and ignore any investigation of Isabelle. Since the release of New Horizons it's looking more and more likely that the two are in cahoots. What are they plotting in that town hall, all cooped up together 24 hours a day?

There are a lot of people really dead set on not ever saying "I don't know."

Not even, best case scenario, if this is the breakthrough game that VR has been waiting for and 10 years from now every home has a headset and it's $1 on Steam? That's what I'd like this game to be, although I'm not hot on buying a PC compatible VR headset. I have a PSVR and I was really excited about it a year ago, but haven't touched it since.

No, 2-3. Some dispensers only give tiny pieces, so it can vary.

Second question, do you even bother with air driers when towels are not available?

But, they sure knew how to mock Hitler, long before Jojo Rabbit made it cool.

In RUSSIAN RHAPSODY (1944), Bob Clampett caricatures the Looney Tunes artists as gremlins electrocuting Hitler. The anarchic little guys here are a clear influence on the 1984 classic GREMLINS by @joe_dante. pic.twitter.com/rkc9LayH6w

Am I basic if I say Bulma?

@liquiddragon: Of course you know, this means war!

Etiquette, or not, western animation deserves love too. I don't hate anime, I've loved a lot of Japanese animation and I'm sure there's a lot more out there I'd enjoy. Speaking broadly I don't like the homogenized character designs and uninteresting character animation. There are, of course exceptions. It seems these days the internet only remembers Spongebob from the great 90s creator driven shows, and Cuphead is the soul representative of the theatrical shorts era. All animation should be fair game to discuss, there's a rich history of the medium from all around the world.

This needs to be a multiple choice poll. I like doubling up Oreos in a stack the best, twisting and licking is probably the most common, dipping in milk is also essential, and I'll eat in a couple bites to mix things up. Once I bought a pack of Vanilla Oreos to crumble for a cake I made, so I made a huge ball of icing.

One bite is insane! I need to at least try to take my time to appreciate it, not inhale it like I'm just trying to get rid of it.

I wish I could remember my first time seeing Super Mario Bros.

When the N64 was new, I was a part of a group project in grade 7. We were going to make our own issue of a video game magazine and gathered all of our games together. It was proposed that N64 games should automatically get 10s for graphics over SNES games. I don't think I personally agreed with it at the time, but it was an idea floated out there.

I only know of one Pizza Pizza. Before this podcast I thought it was a single independent shameless Little Caesar's rip off. I maybe ate there once, I have no memory of it. There are much better places to get a quick slice in downtown Vancouver.

For me, it's not so much pace, but the commitment of watching a show or big open world game can be daunting. I'm hesitant to even begin, I have to find the thing I want to focus in on. Some shows I've seen only one episode, I'd like to return to them, but I get distracted by something else. I haven't played very many games this year because I am focusing on TV shows I've neglected. I'm not sure if my brain can balance both.

Movies are nice because it's just a 2 hour one time commitment. Youtube videos can be a great quick fix too, but they're so also worse. There's an infinite amount of them and they are an easy, tempting distraction. Like spending hours on Twitter.