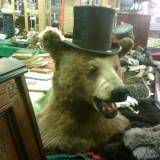 God, I can't remember the last time posted on the forums. 100% without a doubt, my Guilty Treasure is Bloody Roar: Primal Fury for the GameCube.

It's not super competitive, but has tons of depth. (Some the character combo strings are insane)

Tons of single player and multiplayer options, along with cheat codes like "infinite Beast drive" for just some over-the-top fun fights. Each character has a unique transformation that add more moves to your overall combos/allow you to preform your special move. And (with a few exceptions) no two characters play alike. It holds up visually 20 years later, and while not the most popular fighting game or franchise, I absolutely love Bloody Roar.

I was at Anime NYC this weekend and to wrap up the show I found the voice of Mr.Satan to cut a promo against Dan Ryckert. We told him the basics, and he just ran with it.

The World Champ @ragercoaster has a few choice words for Drity @DanRyckertpic.twitter.com/5qwVJH23Im

Looking over at my shelf, just spitballin' here. Could these be B-Games?

Freedom Fighters
Killer 7 (for that matter, any Suda 51 has done)
Madworld
Beyond Good & Evil

Rock Band 4, I still play ether by my self or with friends at least once a week if not more.
I have like 5 days or more worth of total playtime, It's a fun time for everybody.

Only rule, one game per frachice. Otherwise this list would be Zelda/RE heavy

3. The Legend of Zelda: Windwaker

Sonic Riders (not amazing, but it's a lot of fun, & I had a great time with it)

Metroid Prime 1 & 2 (Both great, but I've got other favorites)

Here's a just a few photos of what I've done over the years, & it's become quite a hobby of mine. Just wish I go to more cons.
I made my first cosplay (MGS 3 Big Boss) around 2007 for Halloween, & when I started going to cons around '08/09 I really wanted to go back, work on Big Boss, & even beyond that.
So 2011 was the first year I Cosplayed officially, as MGS 3 Big Boss (Can't find my old photos for that), & it was awesome. I bought a compression shirt, some more accessories, & it fit so well.
Next year, I really got back into Persona 4 because of Persona 4 Arena & The Golden coming out, & Kanji was my favorite from the game. I took an old jacket, made the collar out of work pants & wire hanger, and the shirt is paint marker. Also, when you made the jacket, Yu is very easy alt cosplay. I even got a folding chair to go with it, that they let me carry on the show floor.
2014, I did one of my all time favorites, Ganondorf from Windwaker. The Jacket was an old graduation robe, hot clued felt, same with the shirt, the sash is an apron from work, the green pendent is from crayola foam (making a new one for this year), & the skirt is something my mother had laying around (really puts the whole costume together).
And most resent, I went back & worked Big Boss into Venom/Punished/Phantom Snake complete with working robot arm (as in, I can still move & use my hand while wearing it).
Working on Shovel Knight right now, it's just taking a bit more time than originally thought. Shooting for PAX 2017, hope to see you guys there.

Coming from a guy who just bought the Xbox One S who had a 4K with nothing to really play on it until now, I'm super happy the consoles are getting behind it.

I have a 4K TV, I want this thing, I'll sell my old PS4, & come out on top. The biggest complaint I've around anything console 4K is it isn't going to be 60FPS or not native 2160P. They talk about how with $400 they could get better, but what about those who don't already have gaming PCs, or a PC that could support that card w/o buying a new PC altogether. I have a PC with i7 4770K at 3.5GHZ, GTX 660, & 8GB Ram a friend & I made back almost 3 years ago & barely play it because it needs a better card & more ram now to run most games out now better. I'm not the most tech savvy guy, & I don't have all the money for this (I'm lucky to make $300 a week) but i know it'll cost me way more to get my PC up & running for 4K then to buy a PS4 Pro & still be happy with it. I get the fact that PC is more powerful this, & you can get more for buck if you buy the right parts, but it's so expensive & they still can't even get 4K 60FPS across everything. This is promising 4K, Sony exclusive titles from now on, I don't have to worry if it's gonna run, crash, not work right with my PC parts, & while not being the 100% top of the line still work & be playable nonetheless. That's worth $400 (or less) in my book.

Deadpool - 9/10
I'm kicking myself so hard for not see this in theaters, I loved every second of it, & the forth wall jokes (my biggest fear) were really well done.
Also, first full length movie I watched in 4K, it wasn't mind-blowing, but just sharp has hell. I'll be glad with I bought that 4K tv someday, I only spent $400 on it.

I still can't believe this happened, & 3 years ago, man time flies. The news hit me in the middle of the weird time in my life (losing/changing jobs), with no idea where I was going to end up, this hit me harder than it already would have. At that job I could listen to my phone while working so it gave me a ton of time to rehear all the podcasts over & over, & a new one every week was the thing I looked forward to the most. The moment I knew I'd never here "Hey everybody, it's Tuesday" again, I almost cried (In fact probably did). I've met Ryan in person once, & he was fantastic. Ready to talk about anything, always funny about it, & will to do anything at the drop of a hat.

He was truly one of a kind.

The last 2 souls games where I played the DLC (DS1 & Bloodborne) I used the character I had from my 1000 points/platinum runs as my DLC & while I managed to beat DS1, Bloodborne is a whole other story.
They really didn't balance The Old Hunters for people on NG+++, so every fight is like 2-3 hits & you're dead. I would be able to get through it, but I fell off hard.

If I had the time, or just so happened to be on the path of getting it, I would, but so many covenants I still haven't done.