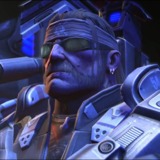 it’s ok. the strongest part is their obvious rapport and the strong dynamic between each other. it’s something the bombcast is sorely missing. if you want a very relaxed podcast that’s more about friends catching up, and you being a fly on the wall, this is for sure worth a listen. if you’re looking for more to the point discussion about games, this isn’t it. it took them over an hour in the most recent episode to get to the games talk. i’d imagine most giant bomb fans won’t mind that, though. it rubs me the wrong way a little, but their strong dynamic mostly makes up for it for me.

and THAT was e3

yes, its from that year where they had paul on and they were throwing up the sims diamond symbol with their hands above their heads. chat really latched onto it and ever since its been used to spam the end of a gb stream.

Way more positive than most apparently. It's another Legion and I thought very highly of Legion. The low point would definitely be Azerite armor. I don't like that it cant titanforge, have any secondary stats, and I HATE that it doesn't drop from Mythic+ dungeons. I've heard the reasoning on that last one from Blizzard and I think it's a lame reason. That being said, I've been really enjoying the questing (stories and voice work are stronger than they've ever been imo), and the dungeons and raiding have been really fun as well. I'm in love with Waycrest Manor especially. That place is dripping with an aesthetic that I'm a sucker for.

Island expeditions and Warfronts both have potential, but it's not being realized just yet, imo. I'm not willing to completely write them off. Overall I've kind of eye rolled the backlash to BFA. A lot of it feels like gamers revolting because they want to revolt. It's the kind of developer blame-y attitude I can't stand. There's some real issues with BFA and the lack of messaging around it, but people have taken this shit way too far. Not necessarily in this thread since I haven't read it. Just talking about what I've seen on Blizzard's forums.

You can move and attack with certain class in wow, mostly melee ones (and hunters). That's not going to change your mind, but as a 13 year WoW player, I just wanted to say that. They experimented with ranged classes being able to attack/cast on the run years ago, but it proved to be too overpowered and bad for the game, much to the chagrin of those classes.

I tend to have a general sense of distaste for Twitter slang on Twitter itself, so it's natural for me to feel that way about it in a game, regardless of when or where it's set.

That being said, there's almost certainly a more complicated truth to the application of modern language and attitude in all entertainment media. One could argue that there should be some represenative flavor because art not only imitates life, it commentates on it. One could also argue that if used poorly, you only serve to date your art, hence alienating future generations. Yea, it's complicated.

Sort of semi on topic, one of my pet peeves is trailers that feature modern music (including those tired ass melancholic covers) laid over a game that takes place in a very different place and or tone. In that case, it's less excusable because it often times feels like marketers coming in after the fact and slapping in some shitty cover without the developer's say.

Man this triggers some memories.

Used to love glitching in Halo and Halo 2. Those crazy super bounces were a massive time waster. Not to mention the classic warthog launching with piles of grenades.

Ha, same thing popped to my mind. I think at one point I knew at least 1 super jump, weird glitch, or way outside of bounds for every level in Halo 2. My friends and I would just make groups and go exploring and showing people tricks or learning new ones ourselves. Good times.

First Tae, and ultimately Makoto. They're both my favorite characters in the game. My head cannon was that Tae was a fun fling for my MC, but Makoto was the one that was a perfect fit. I love her intelligence and poise while planning in the group meetings. I don't know how the other party member romances go, but the one mine wrapped up with Makoto was awesome. She felt like my character's Topanga from Boy Meets World, if that makes any sense. Also, I immediately fell in love with all her combat stuff. Not so much the spells, but her animations are just sublime. There's a weight to her punches when you're attacking that is just so satisfying to watch. Her persona is also rad as fuck. Tae was really cool too. I enjoyed her story and especially her personality. I think she's a pretty good example of a character being sexy without being pervy.

It could be worse, they could use the phrase "sort of" in every other sentence like people on waypoint and polygon do. They use it basically the same way people use the word like, but for some reason it sticks out so much more to me.