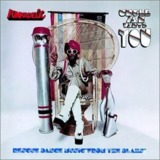 @shinmaru007: I wrote my first and (so far) only user review on this site for Elsinore out of sheer hope that I could convince at least one other person to play it. People need to know about Elsinore damn it haha

@majormitch: (Sorry about the length.)

So fundamentally, what you're doing in Sayonara is moving forward very very fast, avoiding obstacles, and collecting hearts. There are also plenty of levels that do other stuff. QTE levels, bullet hell levels, rhythm levels. But it always returns to that core idea: Move forward. Overcome obstacles. Collect the hearts.

There's certainly narrative subtext to mine there, and that's yet another aspect of what makes Sayonara great. But the reason it struck such a chord with me is because it reminded me so much of what I look for in a great album. There's variance and the ideas evolve as it goes along. But in the end, there's a singular concept moving its ideas forward, and I think that principle applies to every aspect of the experience, be it the visual/non-visual aesthetic or the gameplay.

So in the end, that's a bit of a difficult question because the style and the gameplay in Sayonara inform each other so well that it's hard for me to tell where one begins and the other ends. I'll say that there's more gameplay variation than a lot of purely style games, and part of the reason I think Sayonara works so well is because of its ephemeral nature. But it's not a game where the aesthetics and the gameplay can be easily separated. At least not for me.

@majormitch: Fair enough. Sayonara is certainly not the gamiest game, but for me, it's definitely the most aesthetically cohesive game of 2019. Everything, from the narrative to the visual design to even the gameplay, seems like it was born from that soundtrack, and I found it incredibly affective. One could say it's dripping with... styyyyyyyyle. (It's also like an hour and a half tops, which for me is a huge plus.)

The thing the soundtrack of Ape Out does when you beat the final final level is a definite Moment of the Year contender for me personally.

My soundtrack of the year is Sayonara Wild Hearts. A bit of an obvious choice, as the soundtrack is basically half of the game's point. But as far as soundtracks that do something creative, I also really loved a lot of the intentionallydumbsongs you can find in Hypnospace Outlaw (that probably require more context to know why they're funny), and the Afterparty music is this really cool blend of gothic chanting and club bangers.