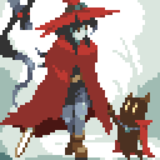 My name's Kyle, I'm a university student studying to become a math teacher. I've been playing games for over 20 years now, writing (about games occasionally) for almost 10, and practicing kung-fu for over 10! English is my native tongue, Spanish is a second language but a bit rusty after a few years of not speaking it, and I picked up a small bit of Japanese in university (enough to get by in Japan, I found out).

My primary hobbies include playing games, making Let's Plays (mostly because I like talking about games), writing fiction and the occasional games-focused essay, fighting dudes, and watching anime.

To get a feel for my tastes, here's a few alphabetical lists:

(Some of) Favorite games (series):