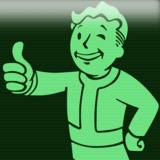 Today? Naw. Every few months or so.

Really want to know what he would say about the Switch, about VR, about current events, etc.

Mass Effect gets an honorable mention. I hope if/when it comes out of mothballs that they scrap the whole Andromeda idea. Go back to the Milky Way and do something with all those other hooks we were shown, like the Shadow Broker, the Skyllian Verge, or the megacorps and mercenaries or something.

Dungeon Keeper. I enjoyed the vibe so much, and there hasn't really been much else like it. Though apparently War for the Overworld did get out of early access purgatory, so I'll check that out.

Gladius. It was a rushed release, but there were some fun ideas in that game. Playing things today like XCOM makes me imagine how good a game like that could be now.

I don't know how to play yet, clearly. I play very defensively, usually making it to the top 25 or fewer without firing a shot. Then I get killed by a person I never saw. Not the most exciting 20 minutes.

And then getting killed is such a letdown, I only have one match in me before deciding to play something else.

I always seem to lose track when these shuffles occur. Where does Patrick work now?
And Austin?

I still find it difficult to watch/listen to the stuff he is in. I looked up the Chrono Trigger ER not long ago, but couldn't bring myself to do it. Seems very wrong that there isn't anything new with him.

Seeing some of the other posts here, such as about his bourbon of choice, does make me think, though. I'd like some kind of supercut of Ryan's Good Life Guide. I really want to know what the robe-wearing cake-sitting man himself thinks the best liquors, coffees, foods, et cetera are.

This casts in a new light all the times I heard/read about an American corp trying to adopt Japanese-style policies the execs had been impressed with.

Anyone still checking this? I need some folks to play with, too.

It's probably a silly question, but I'm trying to talk myself into getting into the game and I don't want to lay down the cash for the whole package right now. And I don't trust Nintendo with things that seem obvious. Any reason one couldn't play on his old 3DS with the cart and continue their game on a n3DS with the improvements later?