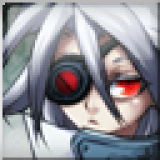 That makes 6 platinum trophies. Got my PS3 on black Friday for $200 along with Rachet & Clank all 4 1 and LittleBigPlanet 2. 160GB. Did not think I would platinum BlazBlue because I felt it was too hard at first. I got it cause it was $12.99 and Gamestop was having buy 2 get 1 free. Plus I wanted some games for my new system. I had even got rid of the install data for it. A friend of mine saw I had it and asked me to boost trophies with him and another. so I decided to reinstall it and play it. mainly between games like when I finish one. I started to enjoy and get better. Soon I had 31 trophies then kept going. I couldn't beleive I got Leonidas. The time I did it it felt harder than before until i got to nu and ragna who were strangely easier. Just 200 ranked matches were all that was left.

I picked out the next five games I plan to play in order. Batman Arkham Asylum, Darksiders, Ninja Gaiden Sigma 2, Bayonetta, Nier. I won't be getting anything new utnil maybe March. I have 3 other games with trophies after these. Wondering if i will get platinum in any of these games.