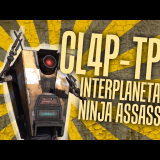 It's been over a decade of listening to and watching Giant Bomb content, so reading this news right after waking up has been a bit of a shock.

Thanks for everything and all the best to Brad, Vinny and Alex in your future endeavors. And of course to Jeff and the remaining crew at Giant Bomb too.

Yep. Death metal has some wildly different subgenres. Basic downtuned chuggery and power chords might not be too hard apart from nailing the timing on some of the speedier stuff, and ridiculous downtunings for some songs might be a barrier. Now, throw in some of those techier bands or something in the progressive vein like Opeth, and you've got a challenge in your hands. Rocksmith has some Opeth DLC available, but after just a couple of months of learning on the guitar I dare not even look that way yet.

Smoke on the Water is available as DLC, but I also refuse to touch that. There's plenty of other less overplayed classic and more modern rock available that is fun to play and good practice, even if it's not something I'd prefer to listen to day to day.

I have played something like 350 hours of Rocksmith 2014 with a guitar and bass with both passive and active pickups. Never had too much trouble with detection, as long as the guitar is properly set up, calibrated in game and the cable has the right settings. You're also going to have a bad time if you have a lot of audio delay in your setup, going through an HDMI is a no go, for example.

I obviously like it, but wouldn't use it as a complete beginners tool. Like others said, there are some lessons that teach some basics of fretting, chord shapes and picking, but they're not very good, and especially chord detection picks up even very sloppy playing.

I hated the dynamic difficulty and maxed it out, but that's probably down to your preferences. I find it more intuitive to see the whole note/chord pattern, then rewind it and possibly practice it slowed down if it's too much. The easy difficulty simplifies things too much for me and ramps up too slowly. I'm not that good at playing guitar, it just confuses me when notes are clearly missing from a part, what I'm playing sounds all weird and then I have to relearn fingerings when the rest of the notes start to come up.

As a metal fan the song list doesn't offer much, but there's a ton of DLC available, and I find it satisfying to expand my tastes and skills by tackling some different genres as well.

I do like it as a way to keep playing interesting. It's an easy and fun way to learn and play along to songs once you get used to the UI. I also like to play around with the tones and effects, and there's a pretty nifty session mode where you can choose a scale and see it on screen with metronome/drums/backup playing while noodling around.

So, I would recommend it as a part of your practice, if you can have low audio lag, are willing to accept some of it's limits and get some lessons elsewhere as well if you can.

Bought Death Stranding from the Steam sale to see what the fuss is/was about, and I'm enjoying it much much more than I expected. The story is just beautifully weird and the right amount of confusing.

The gameplay is also surprisingly good. Not the most exciting thing out there, but hauling cargo around the world feels well made and kind of meditative. I also appreciate the system for sharing resources and posting signs. I found what I considered a clever shortcut through a BT area and took some time posting signs so others could follow it. The bunch of likes that earned me actually made me feel all warm and fuzzy. It's the strangest thing with this game, it just feels good to play and have positive interactions with strangers.

It's the best time to be playing early access games.

Hardspace: Shipbreaker is quite a lot of fun for what is essentially a job simulator. Mastering the craft of efficiently taking apart a spaceship and having some catastrophic depressurisations, fuel leaks and reactor meltdowns on the way is surprisingly fun. A bit wonky, but already feels like a pretty solid experience.

Teardown is also a lot of fun. The good kind of chaotic where the best laid plans sonetimes get ruined by the smallest variable, but the end result is more mayhem and hilarity.

Forgot that Halo 3: ODST had become available in the Master Chief Collection. So far it feels like a nice break from running around as Master Chief. They did a good job with the armosphere in this one.

Horizon: Zero Dawn PC port. No technical issues at least in the first 5 hours or so. I was quite impressed by the story telling early on. They did a great job setting up the relationship between Aloy and her father-figure while keeping the world building more in the background, Then unleashing more about the world happenings later when it didn't overshadow that part.

Sure, there are some more awkward moments, but it's overall quite effective and well paced.

The gameplay is also quite entertaining and hopefully I can break out of my tall grass and stealth kill routine.

Oh, and just finished Doom Eternal. More fun than I expected, honestly. Sometimes it's just nice to rip and tear through a demon horde while ignoring large parts of the story.

I just finished it and liked it. The beginning parts were awesome and reminded me of S.T.A.LK.E.R., especially when it was night and the anomalies were roaming around. The later areas didn't have the same draw. The desert was ok with the sandstorms kicking up dust, and the old ships wrecks in the dried lake bottom. I basically crouch-walked leisurely through the whole forest section. I only fought with the bear, and spent my time just hoping it would get more interesting or end soon. The last area was a more interesting one, but a bit too scripted to have any sense of adventure or real danger.

The dialogue and writing in general was swinging pretty wildly between amazing atmosphere, hilariously bad, and just cringy. Mostly landing on the last two. The part with the lonely lunatic in the wheelchair talking to himself was especially awful, as was most of the bonding between the crew. The game was at it's best when it didn't force me to listen to someone trying to force the atmosphere down my earholes with bad dialogue, but instead let me soak it in at my own pace. I spent a couple of great moments just taking in the apocalyptic scenery. The most magical one by far was standing outside and staring at the world flying past outside while Stepan played and sang after the wedding.

It was more of a positive than negative experience. The atmosphere and immersion were good enough to keep me going through the worse bits. I doubt I'll ever replay this one, but if I will it's going to be with the voice acting in russian.

Metro: Exodus is pretty darn great. The first area with it's electrical demons was a near perfect mix between the first Metro games, modern Fallout and S.T.A.L.K.E.R.. I think they struck the balance between hazardous, but mostly fun shooting, exploration and inconvenient busywork well.

Resident Evil 2 Remastered is also awesome. I never had the original and remember only bits and pieces that I saw my cousin play. It's a very enjoyable experience even with very limited nostalgia for the original, but best enjoyed in shortish sessions like 7.

Long time, no positivity about games.

There was a discount for Forza Horizon 4 at a local game store so I decided to see how it is. A great time is what it is. It's fun to play something with a laid back approach to driving fast. It does have a ridiculous story with a very over the top hypey tone, but that's not what I'm there for. Just turn off the edm radio and fly through the countryside at 250km/h with glee. Luckily the stone fences in the british countryside are apparently made of cardboard or foam.

Brad convinced me that State of Decay 2 might be a game for me, so I picked that up as well. It's doing well with the balance of taking care of your camp and the characters within and exploring and destroying nests of zombies. Apparently I'm no longer sick of zombie apocalypse as a backdrop for games and enjoy this thoroughly.

I've had a fun time with BFV so far. Getting used to moving and aiming took a couple of hours and some messing around with the mouse settings.

The only real bug I've encountered so far was when I drove through a bumpy field with a truck that was towing a cannon. The truck and cannon together vibrated so hard on uneven ground that the whole thing bugged out and shot tens of metres up in the air. After landing it repeated twice until I was on more even ground. It must have lookes.

Apart from that, no crashes or other funny business so far.