I have made an online version of the LEGO Giantbomb set from the mailbag!

It's not ready yet, it needs a few more details, but when it's ready, I am planning a have an online party there for everyone here to come and trash the place!

I need help from a PC wizard!

My PC has just died.

Not just any PC, my retro Gaming Rig, the computer I used to play the older classic games from eras long ago. So much older than the Wii's architecture or Bush's presidency.

The power thing that makes the PC run with power has finally died, and I have no way to replace since it is so old, but I want to keep the contents of it's hard drive.

How do I get my stuff away from the hard drive into another storage format, or better yet, keep using the hard drive on another PC? It would be a dear shame to me to lose all these history, which includes X-Wing and X-Wing Alliance, Command and Conquer 1, Civilization 3, Flight Simulator 98, Train Town, Microsoft Golf, and much more....

Help me, [insert name here], you are my only hope!
4 Comments

I haven't been looking for new games in over a year.

The heck I just saw?

Took me a lot of frustration, grinding, confusion, and fun. But I still have no idea what happened. What did I just see? The ending made no sense to me, and what's worse, I was incapable of creating my own substitute logic because there didn't seem to be one!

SPOILER WARNING: Click here to reveal hidden content.
I think I was supposed to stop the meteor, but I was hunting Sephiroph. I killed Sephiroph, who looked nothing like him, but how did I stop the meteor. It was all a confusing array of lights and early 90's CGI. Then it showed Midgar getting destroyed, and they said all the inhabitants were evacuated, but then they said they all died, then they fast forwarded to 500 years into the future without no explanation or motive to show what I believe is Larry (what I named Red XIII) and two cubs running to see Midgar in ruins.

So what happened to the characters? How did they stop meteor? Was it Aeris? But she was dead. And why is she controlling the Earth? Or is that the Earth controlling itself? But then why is Aeris shown? It was a replica of the opening, but it didn't explain it, it just did the Deja Vu thing. This is the first Final Fantasy I got to the end. Are all the others like this?

I was hoping someone here could attempt to explain it better than the game.
9 Comments

What I think of your precious Final Fantasy XIII, Japanese Import 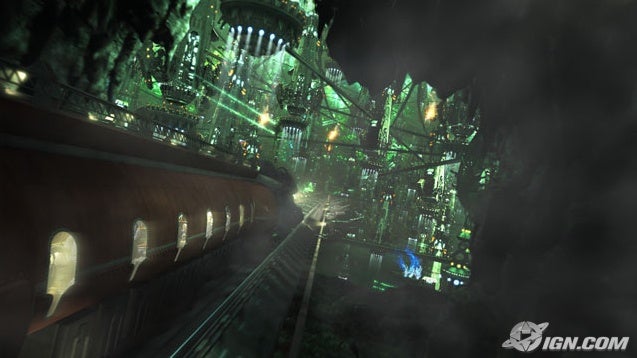 Breaking through the front line!

However, I will attempt to explain what is going on in this game. The game begins with a fast moving CG sequence of a train going into a city, being stolen by some passengers that are not really passengers, escape into a city into a battleground. Sound familiar? Don't ask me.

Our protagonist seems to have a back-story haunting her.

The cutscene was very quick moving and introduced us to our first two characters, a woman by the name of Lightning with (weak) powers of flight and (very good) fighting styles, and an African American guy with an afro who I think is name is Sazh, who is comical and has a chocobo in his afro.

These two crash the train and escape it, only to be approached by a large machine, who will be your first battle. Now, I only played the 2D SNES Final Fantasy games and FF7. That's it, I did not play the later installments because, frankly, I did not care. The battle system in this game is similar to the past games I played, but feels very different. 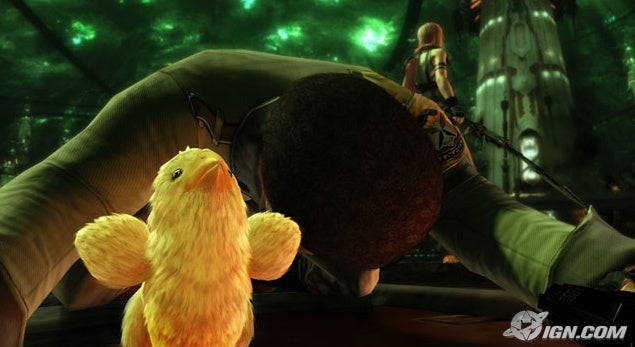 The game has a good amount of humor to keep it from being melodramatic.

The best way to describe it is the gameplay of the traditional FF battle system with the feel and visual formation of Chrono Trigger. The characters place themselves automatically along the battle screen, but it didn't seem to have any effect on their performance.

It was confusing to me seeing all the numbers in the battle. When a character attacks, instead of a single number appearing on your opponent showing how much he was damaged, a ton of little numbers appear depending on your attack. To me it was confusing, because it wasn't immediately clear how much damage I did (and I am not very good at adding all those numbers in less than one second). 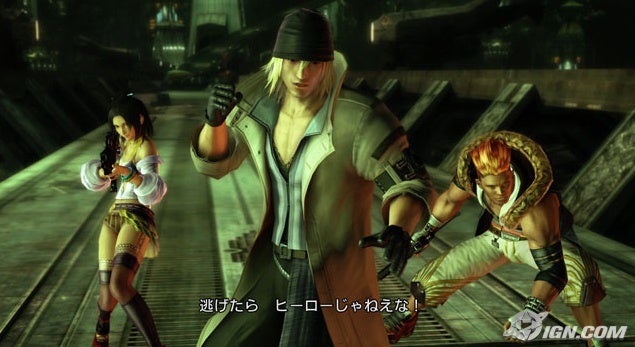 This game has a TON of characters introduced in a very short time, most of them playable.

However, the battle itself looks fantastic. The menus look incredibly smooth and changes a lot. It shows you how much disc space they spent on the game. Everything is incredibly visually detailed, the menus shows different images depending on which character you are modifying, and even the save states look different depending when you save. It really shows the power the Blu-Ray disc has in creating 2D imagery.

Our characters ran thru a linear path during this part of the story, fighting enemies as they appear. When they got to a certain part, a cutscene appeared, giving a cliffhanger to these two characters, and we were then introduced to another character (some sort of blond man who was leading the attack) in another part of the battlefield. It continued this formula again when we met with other characters (two kids in the middle of the battlefield). They eventually united. 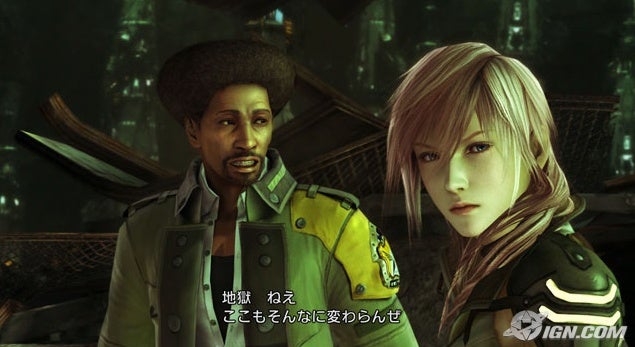 The graphics in this game are sharp and very impressive.

However, the most impressive part of this game so far is the graphics and music. They are absolutely incredible. The hair the characters have are incredibly realistic, and boggles my mind how they were made. The music is also incredible, sounding perfect for the scene for almost every note and makes the gameplay a lot better when matched with the music. Impressive considering this is the first numbered Final Fantasy without music from Uematsu! 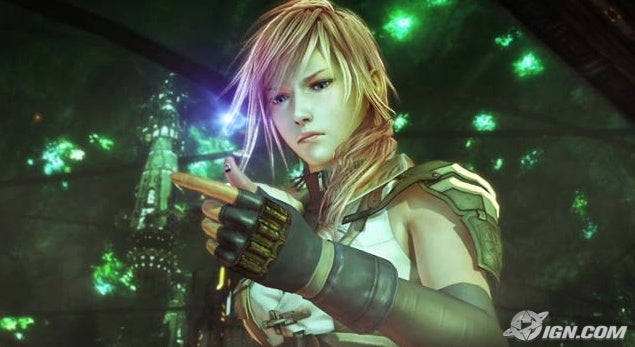 There is little doubt in my mind this story will be just as deep, complex, and confusing as other games in the series. But this one will definitely look better doing it.

Whether this game will be as good as past Final Fantasies depends on how the game gets later into the story. So far, the opening of the game is not as exciting as Final Fantasy VII, and the cinematics are not as impressionable as that game, but the graphics and music definitely carry it out well.

Would I recommend importing it? Not if you don't know Japanese. It's also important to wait as people begin to complete the game to see if the whole game was worth it, since I only got until about an hour into the game, and the game promises up to 60 hours of play. I recommend waiting until it is localized in your county to make a decision, that way we can all be more prepared to see what we are getting. 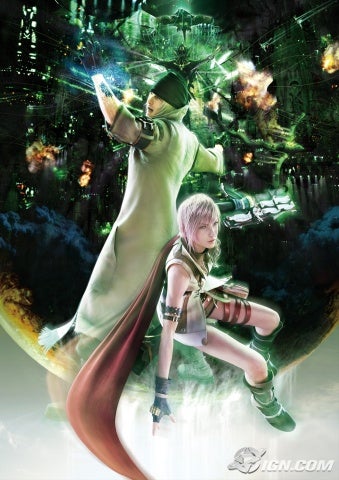 If you want to see more about it, I hear there are some people playing the game live by streams out on the internet, but quite frankly, I am not playing any game nonstop live. Ever. Most people would just abandon me by the 30th Game Over. It's not that this game is hard, but I suck at games.
12 Comments

You dare underestimate my power!?! I SHOW THEE THIS.


A few weeks ago, I started a fun project to make a short animated movie. But people wondered if it will ever really get done. Yes. It will. But I first need voices.

One way I thought of getting new voices was to show off what the movie might look like. So I made that short demo to show a rough unfinished version of a hypothetical scene in that animated movie. Unlike the finished movie will have, it has no lighting effects, no CGI, music, sound, or voices, just the animation.

If you see yourself making a voice for a character in the movie.....GO AHEAD AND COME! Let's make this a reality.....

You may have just been owned by me.
14 Comments

Today I bought a new game!

The Game of the Year Edition of Civilization III! I got it at a yard sale for $2, and it was in excellent condition, almost new with everything there, almost never opened.

Because the day before I got The Movies for $6.

And about a week before I got Fire Emblem: Shadow Dragon for $10.

And less than a week before I got Chrono Trigger, F-Zero, FF6, Street Fighter 2, and Super Punch-Out!! for the SNES.

All in one month.

I HAVE A LIFE, AND CANNOT PLAY ALL THESE GAMES. Stupid life.

So, in order to finish these games and the rest of the games I have yet to finish, I need to lock down and try to stop buying so many games, and it's getting really hard with New Super Mario Bros. Wii and Final Fantasy: The Crystal Bearers knocking down my door.

I need advice, Giantbomb. What do you guys to do to keep yourself from buying new games and actually finishing the games you already own?

I tried out the Batman Arkham Asylum demo on my PC, since I would really like to try the game out.


However, on the installation screen, it says my computer does not meet the minimum requirements for the game, having a 1200 Megahertz processor, while the game recommended a 3000 Megahertz one. However, I installed it anyway, and was not surprised that at low settings, the game ran in slow motion. However, I noticed that even at it's lowest settings, it still had advanced special effects that weren't needed and could be removed with older games.

So I went into it's data files and changed the game graphics settings file via notepad, changing everything from true to false. But I got interesting to see how far it could go, and I changed everything to true.

Surprisingly, now the game runs with all special effects, including blur, shadows, and stuff, while running faster than before.

To keep it from sinking down to the bottom.
1 Comments

Blogs Created:
41 blogs
Most Commented blog:
Over 1 year in, has Giantbomb satisfied your expectations?
Total Comments on blogs:
427 comments