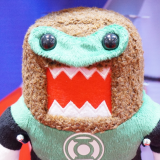 While things are definitely getting better for me lately, I cannot endorse the use of glitter in my life. Please st… https://t.co/WREAf9xgCM

Okay, for those who don't know, Seth MacFarlane, creator of Family Guy, recently let out that Stewie Griffin is gay. Now I'm not surprised and I'm fine and dandy with it because Stewie (along with Brian) is one of the best characters on the show in terms of humor. However, one site called ChristWire (or some bullshit like that) has freaked the fuck out and said that Family Guy is promoting a "homogay agenda" (oh I love that so much) to children. First off when did Family Guy become a children's show? And second, what is a "homogay agenda" (WTF?). Anyways here's the link:
http://christwire.org/2009/08/seth-macfarlane-admits-family-guy-stewie-griffin-gay-homo/#comment-13679

That's not all though. I decided to post a comment about this man's crazy ideas so I did. Now I want everyone to read this and tell me what you think because I got a real kick out of writing this. I even gave the guy my email address so he can contact me because I want to have a one-on-one talk with him. So here it is. Yes, it's long but if you read it that would be great.

" Thank you for adding some hilarity to my day. I happened upon this site looking for the official article so I could see if the great Seth MacFarlane had any funny stuff to say because everything he does is comedy gold and let me say you sir are one of the most annoying people I have ever heard. Next to Rush Limbaugh or Keith Olbermann of course. I’m a Catholic Christian and I find this kind of religious craziness that you are typing wrong. Just because someone does something that you don’t like doesn’t mean you need to spread your crazy babble about “homogay agendas” (that was hilarious what you did there by the way) to everyone who is stupid enough to follow this useless site. It saddens me to see there are some comments here that agree with your point of view. Family Guy in no way is a children’s cartoon it starts every episode off with a huge sticker with TV-14 on it. Maybe you can’t see it though because you obviously have a narrow-minded view. Also, just because there is a gay character doesn’t mean they are trying to spread a message for the “homogay agenda” (see I love it so much I’m using it again) they have. Finding Nemo had Ellen Degeneres, an openly gay actress/comedian, play the voice of Dori but I didn’t see anywhere in that movie mention a single gay reference. The cartoon is just good wholesome fun for adults. Which reminds me, thanks for the great Stewie compilation you have there that made me laugh as well. Now on to why you should not be writing because this article pretty much is a perfect example of it. First, you used a statistic that did not have a source so I believed you made it up. Then, when asked for a source you linked to a site that is just as biased as this site leading me to believe you never made it up but they did. Next, you are biased. Yes that word is used way too much but this may be one of the few times it’s actually used correctly. You think your religious view is the only view and that anyone who disagrees with you is destined for eternal damnation in Hell. You then go on to tell them what to believe. Well, I believe that is called propaganda and I also believe that is wrong. Anyways, I’ll go back to watching this great comedy show, which by the way returns Sept. 27 for all of you people who aren’t brainwashed into believing that the show is evil. In the meantime, you continuing writing articles about how Two and a Half Men is throwing it’s “homogay agenda” at us (oh man, this is fun using your little made up phrase here. Hey, maybe they’ll put in Webster’s? Wouldn’t that be great! Than you may be known for something great like making up the dumbest phrase ever!) Where was I again, oh yeah Two and a Half Men, you would say that that show should be banned because two men (although related) are living together. You would believe they are gay without even watching the show (once again, narrow-minded) and write up a post about it on this propaganda site. Would you do me a favor though? Would you include a great compilation video so I have something to watch again? Oh who am I kidding I’m not coming back to this site. Actually I might move over to that article called “I Am Extremely Terrified Of Chinese People” that sounds like a good unbiased read." -ME

Also, for those who read it but did not click on the link or did not notice. The article I mentioned at the end is real and was below the comments at the time I was typing this.