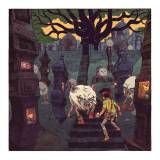 Ah man, Really wish it released on the mac or vita... I hope it doesn't take too long for them to finish those versions. This game seems legit.

Yeah! I am! Hope it's as good as Zeboyd's other games that I played!

It's only coming out for PC and Mac at first, right? I might wait for the Vita version...

Hey All! So on Thursday, the first major DLC just launched for Stellaris, called Utopia. This update focuses more on better customization of your empire through something akin to the culture track from the Civilization games, using a new resource called "unity." Also, in the free update, they have revamped how factions work. No longer just obstacles, they are now political parties that, if catered to, allow you to produce more influence.

I for one really like this new update, as it makes for even better stories, and drastically improves the midgame, as not only do you have to deal with outside threats, but you also have to make sure that your factions are appeased.

What does everybody else think?

@zelyre:I was one of the really lucky people to get Gloomhaven and not be a kickstarted backer, and I can tell you, it's legit. Even though it's a lot of money, the amount of value you have is really great, and one of my favorite things about it is that even if you don't do well in a scenario, you still are progressing, which is something that I feel a lot of co-op games don't really do.

I also love the variety in the classes, and even the 6 that you start out with are all vastly different, the ones that you eventually unlock are just buck-wild. The Kickstarter for the reprint is tomorrow, and I really think people should get in on it.

Another game I'm really interested in getting into is Spirit Island, which seems to be a reverse of a Settlers of Catan sort of game, where instead of playing settlers building civilization, you are instead cooperating as the spirits of the island (like the title, right?) and trying to oust the settlers before they mess up and dunk on your way of life. It's being published by Greater Than Games who've done the really good Sentinels of the Multiverse card game, and I hope it is good!

So this is the first non-Original Generation SRW game to be officially translated into English. Although it's not available in the US, you can easily import it with Play-asia and somesuch, or even use a non-US account to get it!

I got it today, and been playing a few hours of it, and it seems good! I've been playing SRW games for a while, but I've never really gotten the story until this one. The translation isn't perfect, but it's serviceable. I love the mechs in this one, and it even has The Yamato (yes THE Yamato) in it, so that's cool.

Does anybody else have this? What do you all think?

These are all fair points. One of the reasons that I started posting is because they finally became self-published again.

The CEO recently had an AMA and did say that the team was still working on some of the things that haven't been implemented. Even so, it was meant to be a 10 year plan, and Hex is barely on it's third year, if that.

Also, the reason that they keep releasing expansions is because that's how they will make money. Honestly, that's when people buy packs, ect. If they didn't do that, then it would be hard to fund them actually changing anything.

However, far be it from me to change how you feel. Sorry this post made you feel bad!

Hey All! So last week, Hex has released it's sixth expansion, hot off the heels of also raising the level cap to 15 and having two separate zones. What does everybody think of this game, or have checked it out? I for one think it's actually the best TCG around, not the least for it's really cool world, the large amount of single-player content (that is FREE I might add), and the cool mechanics.

What does everybody else think?

I really needed this game. It came out at a time that I also felt like Mae, very disjointed and confused. I thought it was very cathartic. I hope to finish it soon.

Got Peri and Odin, so that's good. Other than that, things are pretty cool. It looks like things are fairly balanced at least up until chapter 5 or so. Wonder how many chapters there are...

Nice job duder! That really made my day. How long did that take you? That was some thorough editing.