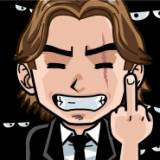 Rest In Peace Ryan, you will be missed.

Nobody will read this (as per usual) but still this is probably more for me than anyone else.

The passing of Ryan is fucking hard on me, for some reason.

The guy has been a part of my life for so many years that the thought of him not being around anymore just finally broke me down.

I have been crying since the news were made official.

The loss of a life, so young and he had just gotten married as well. That's just not fair to anyone, ever and especially not a man like Ryan.

He's been in most of our lives for a long ass time, his voice has kept me (and others) awake at night or at work through podcasts. Helped people fall asleep and woken people up. Him and the rest of the crew are like the people we consider friends without actually knowing them in real life.

I'm angry and sad at the same time and I don't even know why that is so.

I have real family members that could pass away right now and I wouldn't give them a second thought or a single tear but Ryan or any of the other people of the Giant Bomb crew and others who were part of Whiskey Media back in the day, or Gamespot? Fucking hell.

Now if this is how I feel about this whole situtation then I can't even imagine what his real friends and family must be going through.

No other people are more worthy of my respect than Ryan and the rest of the guys who touch on our lives on a daily basis.

Also, just in case you're out there somewhere, you beautiful bastard.

So this is true

Hey, I just met you, and this is crazy.

My name is Kony, and I stole your baby

That's basically it.
Going to different countries now so not much time can be spent on Giant Bomb.
Might as well not upgrade my subscribtion since I won't be using the site for at least a month anyway, well I'll check news but not a ton of video content.

Why is the first few months always filled with weird gaming and tech related events?! >_<

My Game of the Year!

My Game of the Year:

Is maybe something open world? maybe it isn't.
Should it be what everyone else is picking?

Now you're probably saying:
Oh "it's Skyrim, right?
That has to be it!"

Seriously, that's what you were all thinking, right?
Karl The Nord is a great character, sure
Yes, it's open world and all that sure
Really beautiful too!
Is filled with amazing quests
Maybe it's Skyrim?

The forger stood absolutely still. The casket had been closed but a faint light made it's way inside.
A myriad of spikes pointed at him glittering as they waited for his body to slip just for a moment.

His knee jerked and he felt the blood trickle down his leg. In pain his head fell slightly forward.
It took him a while to realize his eye had ruptured and begun to leak"

Sometimes I just love the writing in videogames

Someone said it better than I could possibly do it

And when you're bored you sometimes picture things that aren't real.
But I have photographic* evidence of this thing I found out that lives inside my laptop and not only inside my TV!


See, I told you he was there!


(*photoshopic evidence would be the right word)
5 Comments

I've said it once and I'll say it again.

People know that I'm a huge Final Fantasy fan, even the anime thingy is kinda find.
And Final Fantasy 8 is still the best in the series.


But I still don't get what the hell there might be wrong with some people when it comes to Final Fantasy 7.
How is this scene:

Making you people cry llike a bunch of fucking bitches who just got their ass penetrated by a dad they thought they could trust
When this scene:

Is never mentioned?
It's the sadest scene in the whole fucking game.
Idiots, I say!

that is all
3 Comments

It is now time to get some sleep.