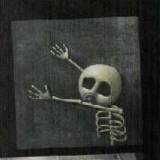 It could be that I just got lucky throught my playthrough, though, to be honest, the thing I relied most on was the basic set of skills the Galak Z comes with. Super boosting with R1 and pushing Square will make you dodge pretty much anything and I found that being aggressive with the mecha to be pretty effective. Basicaly, charge the sword and boost through and enemy, slashing while passing it. You'll be safe on the other side, ready to charge again and get him before he's able to react. It's very good agains the more nimble adversaries that show up later.

Having said that, I may have expressed myself more negatively than I meant to when I spoke about the difficulty. I do admit being a tad disappointed about it being over so quickly, but I guess I only feel that way because I enjoyed my time with it. It just feels good to float and boost around, using the environment to kill the enemies (specially luring them to those spider things that hide on the rocks) and such. I guess I expected more, but it was an enjoyable game.

So, I just finished the Season 4 of Galak Z and the menu option for Season 5 just says "coming soon". Is this a content that's coming later, or am I supposed to do something in the game to unlock it?

A little aside from that, how have you guys felt the game's difficulty? The patch notes for version 1.02 says that there have been some balancing with it and I'm guessing it was probably toned down a bit. I didn't die once, not even came close to, throughout the whole game, which was weirdly a bit disappointing? I mean, I could feel the roguelike elements in the procedural levels (though they did repeat a few times) and with some different equipments. But I was expecting to beat my head against Galak Z for quite a while and it was very quickly over.

Still, I enjoyed it, that's why I'd like to know how (or when) we'll be able to access Season 5.

No idea what's going on here, but I like it.

There's a water mark in the image for a website called "Would You Kindly".

Yeah, I like the idea. Maybe not a reissue of the China Don't Care, but something that'd be a homage to Ryan, like "We Love Ryan Davis" or "Summer jams forever".

Rest in peace, Ryan. You made a difference. You will be missed.

There's one thing I particularly loved in episode 4, that can only be seen if you take Clementine with you and it doesn't involve a choice. When you take her, she stays put in a classroom, and if you look around you'll see Lee describe that there's a shelf with paper and some crayons.

This little description reminded me how, not long ago (in episode 2, I believe), Clem was just a little child, complaining how bored she was, and mentioning that drawing is the only thing she could do. When I was reminded of that, it was shocking to see how her character had naturally grown and changed after the events have witnessed. She's no longer the child you rescued. She's part of the group, and she desperatly wants to help everyone else as best as she can. This was a great moment.

I thought that over here we wouldn't be getting the premium service and all the eShop discounts. Glad to be wrong.

I'm not sure how I feel about it. It doesn't feel like a solution, it just feels like Valve's pushing the problem to us. I guess that maybe this was the intent of Greenlight, but I see more flaws in it than advantages. It seems to already be clogged with more games than we can evaluate, and there are many that seem to be unfinished or just unimaginative clones of popular genres.

I don't know. Right now I'll I'm seeing is the same problems of the App Store, with just a layer of voting that doesn't seem to make much of a difference. But maybe it'll be improved.

@CornBREDX: I agree with you completely. Diablo III is not, at all, a bad game, but there's nothing in it (for reasons you mentioned) that kept me playing. I played Diablo I and II for countless hours, and I'd still go for it today, while with Diablo III I just finished on normal once, finished Act I in the next difficulty and never played it again.