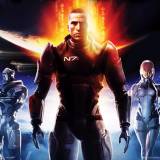 Japanese Gaming what a weird beast it has gone through ups and downs it practically revived the video game industry in america and now it is in a weird period because of the beast it has created the american market which is much more bigger than the japanese market
So let's see how each of the 5 biggest japanes third parties have done on these generations consoles(ps3,xbox 360):

Capcom: I believe that capcom really gets the american market with games like devil may cry 4,lost planet, resident evil 5,street fighter 4 and dead rising . It also totally gets downloadable games with Megaman 9,Bionic Commando Rearmed , SSF2THD remix and much more but I do believe thay are really lacking in undderstanding add on dlc like the street fighter 4 costumes and resident evil 5 multiplayer which are both obviously on the disc and you are just downloading the unlockable code for them and then the re-release of lost planet instead of ofering that extra content as DLC but still they have done more good than bad
Grade: A

Namco Bandai:They have released some good games but no triple A titles some backwards in design but it is ok. Now as far as downloadable games they have been so-so pacman championship edition and galaga legions are both brilliant but with they're retro titles are just plain out robbing you and they're add on DLC is just plain out terrible selling an extra level for tales of vesperia that is almost giving the player an auto pass for money
Grade:B-

Sega: Hasn't even really been japanese but they have defianetly had some good games and some bad games but they give the vibe that they're just in it for the money. Then they're downloadable games have not been all retro games that are honestly over priced especially with they're new compiliation and well they're dlc has been practically nonexistent
grade:C

Konami:Other than MGS4 everything else has been bad and really on DLC they haven't put anything interesting
grade: D+( that plus is just for MGS4)

Square Enix: Awful they're games have been terrible  but they have felt all like experiments (Infinite Undiscovery, Last Remnant and Star Ocean 4) but I also think this has to do with the genre they make the eastern rpg can't be done well if it isn't evolved a little perfect example Persona 4 is great because it is just not an RPG it is also a sim and it's RPG mechanichs are different from the typical Jrpg. Also they have just not gotten the 360 or the ps3 even tho we are in the 3rd year of this generation
Grade:F

Put your thoughts in the comments section