The inspiration behind this game is immediately apparent. Jeff and Brad dive in to see what sets it apart.

by Jeff Gerstmann on March 30, 2015
Share:TwitterFacebookReddit

Axiom Verge is not Metroid.

It certainly looks a lot like Metroid. Metroid was probably a large influence on the developer as Axiom Verge came together, but Axiom Verge uses that inspiration and familiarity to launch off into a different direction, with power-ups and abilities that don't map directly to Nintendo's old formula. You think you know how Axiom Verge will play out. But you don't. Actually, if you read this review, you might know a bit more about how it'll play out. If you're the sort of person who doesn't want that, just read the rest of this paragraph and move on. Axiom Verge is a great retro-styled action-adventure game with a difficulty curve that feels just right and a story that pops up just frequently enough to keep you going. It inspires the same sort of obsessive need to reach 100% completion and collection percentages as the best games in the genre. It's more referential than reverent and is absolutely worth your time if you're into the whole "Metroidvania" thing.

An explosion sends you screaming off into some kind of alien dimension at the outset of Axiom Verge, and what happens from there fills in some of the blanks about the story behind the lab accident that caused it and what role you, as a scientist named Trace, are meant to fill. The story is minimal, but it draws you into this mysterious world pretty well, giving you another reason to keep moving forward. I suspect, given the game's focus on items, map percentages, time-to-complete, and so on that it might have multiple endings that play out depending on how those various numbers are tweaked, but around these parts we've only seen one, and that came after about 15 hours, 97% map completion, and over 70% of the items. If you're interested in taking it on again, the game has a harder difficulty setting and a specific speedrun mode that adds a timer, removes all of the cutscenes and time-chewing dialogue, and lets you just, ya know, run.

Like most other games in its class, Axiom Verge is a game about getting items that grant you access to more parts of the world. Can't jump high enough? Well hey, guess what? You'll eventually be able to jump higher. Actually, your mobility eventually gets further enhanced by drones, teleports, grappling hooks, and some other really interesting mechanics. I really appreciate the game's host of upgrades and items--it's almost as if I kept waiting to get a double jump or some of the other standard sort of mobility upgrades, but never actually did. The way you move around eventually lets you access more areas, whether it's figuring out inventive ways to move through solid walls or finding a way to fit through tighter areas. No, it isn't "rolling up into a ball."

There's a wider weapons loadout than I expected, too. The right stick opens up a radial menu for selecting weapons, pausing the action as you swap. You start with a standard shot, quickly get a second gun with projectiles that explode into shards after a second press of the fire button, and it expands from there. You might find a lightning gun that locks onto nearby targets. Or an ice gun that shoots tons of tiny shards, but has very little range. Or a shotgun-like burst of short range electricity that is, definitively, the best weapon in the game. Or maybe there's a better one that I didn't find. Some of the weapons help you traverse the world and many of them seem to be mandatory finds as you make your way from one place to the next, but there are definitely weapons that you'll only find if you're searching for extra stuff. You can also find health power-ups and boosts to your weapons' strength, range, and projectile size as you explore. The game hides its secrets in a number of really interesting ways.

Axiom Verge presents itself as a very deliberately "retro" sort of product. The audio and visuals both evoke the presentations of the 8- and 16-bit eras, but also evolve in meaningful ways that make this more than just another pixel art platformer with a chiptune soundtrack. If anything, this is another way the game sort of subverts your expectations in a cool way, using things like sprite flicker and glitched out graphics as meaningful portions of the adventure.

I'm not sure that I'll actually go back and collect 100% of the items and seek out alternate endings, but that first playthrough is absolutely killer. I found myself scouring edges of the map in search of secrets and really had a fantastic time doing it. It looks great, controls really well, and has a level of difficulty that makes things challenging without making them overtly frustrating. If you've ever been into this sort of action-adventure game, Axiom Verge is positively terrific. 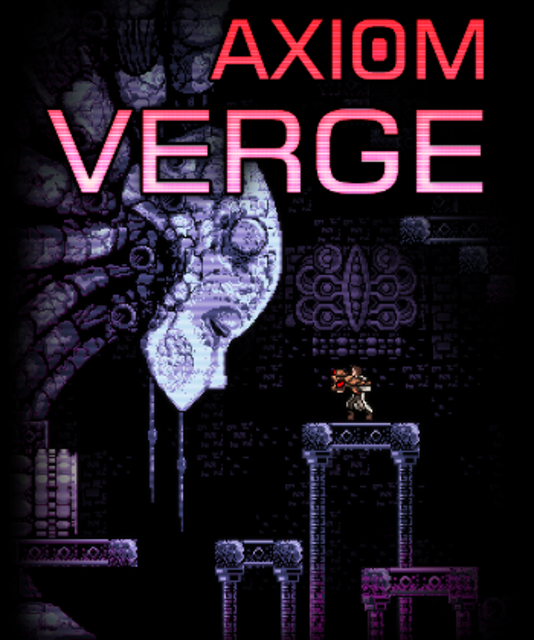