by Jeff Gerstmann on October 14, 2011
Share:TwitterFacebookReddit

Gaming's greatest melee combat system gets even better with a few key improvements, while the rest of Arkham City gives the existing Batman formula some extra size and scope to keep things interesting.

Batman's return to video games finds the World's Greatest Detective walking into some very different expectations. Instead of just competing with (and crushing) all of the other licensed games that we wade through on an annual basis, Batman: Arkham City is the follow-up to an inventive and often-amazing Game of the Year contender. In the face of whatever pressure that creates, Arkham City doubles down on what worked in the previous game. This isn't a dramatic reimagining of the things that made Arkham Asylum so great. Instead, it expands the scope a bit by giving you a larger area to explore and enhances the things that worked previously, giving you new combat options to toy around with while you get to the bottom of a pretty exciting story.

The story starts with a bang, but doesn't really do much to set up the current state of the world. How, for example, did anyone buy into the idea of walling off a large part of Gotham City and turning it into a mega-prison? And who the hell signed off on putting Hugo Strange in charge? These are things that are explained in a bit more detail as you proceed, and as Batman, you'll need to make your way through this prison full of super villains. Some of these guys, like Penguin or the Joker, are major thorns in your side for large parts of the game. But as in the previous Arkham release, there are plenty of villains making what amount to cameo appearances via the game's side missions. Some of the side mission arcs--like The Riddler's--will probably take more time than completing the main story does. But others, like finding a gadget upgrade that Mr. Freeze left lying around in the Steel Mill, get checked off almost immediately. The game's map and mission screen is well-designed, which makes keeping track of all that stuff nice and easy.

There are plenty of things to do and see in Arkham City, but the main story missions are just as linear as the previous game's were. You aren't presented with a multitude of primary tasks that you can complete in any order. Instead, the story has you move from one location to the next, with great-looking cutscenes breaking up the action. A deadly sickness coursing through Batman's veins provides a little suspense, and you'll make an uneasy alliance or two by the time you're finished. If you decided to blaze right through the story, you'd see most of what the game has to offer from a gameplay variety perspective, but the 10 hours or so it'd take you to complete the game goes up quite a bit if you get into the side missions. For the most part--I could really do without the extra set of "fly through these rings" glide training side missions--the missions are quite good, and certainly worth seeing.

Despite the appearance of a big, open city, Batman: Arkham City isn't really an "open world" game. In fact, much of it is extremely similar to the previous one, though the various enhancements eventually add up to a lot. The combat isn't dramatically different, but you can pull out more of your gadgets in a quick-fire fashion, letting you work them into the middle of your combos. If multiple enemies attack, you can tap the counter button multiple times to repel all of the incoming attacks at once. The flow of fighting is as good as it's ever been, and the additions are definitely welcome. Traversing the big-looking city is made easier by glide and dive-bomb mechanics that make it feel like you're hang-gliding around the world. You can get from one end to the other in a minute or two, once you've gotten good at gliding, floating, and grapple boosting off buildings to gain altitude. It's a simple trick, to be sure, but all these abilities mean that simply moving around the environment is fun. You'll also have new items to use, both to solve puzzles and to fight enemies. Freeze grenades, for example, serve a dual purpose. When you see pipes emitting hot, deadly steam, you can plug them up with a freeze grenade. If you bust it out in combat, you can root enemies to the ground, giving you time to saunter over and beat the living crap out of them.

The enemies have found more ways to deal with the Batman, too. There aren't as many situations where you find yourself in a room filled with gargoyles or other similar high perches, but when you do find yourself swinging from one safe position to the next, enemies equipped with infrared goggles will see you in the dark, unless you acquire a specific upgrade designed to neutralize their advantage. You'll also see some enemies with transmitting backpacks that prevent you from entering detective vision, preventing you from keeping track of your enemies until you've disabled the backpack. Enemies with blades, stun guns, and shields also appear, forcing you to mix up your tactics. Lastly, you'll occasionally see that one enemy in a pack of bad guys glows green. This denotes that he is an informant for the Riddler. If you wipe out everyone else and leave the informant intact, you can interrogate him, which marks the location of several Riddler trophies and riddles on your map.

The Riddler plays a larger role in Arkham City, but the riddles--one of the coolest parts about 2009's Batman game--aren't featured as prominently. There are around 400 or so Riddler secrets to find as Batman, but most of them are trophies that must be collected, and these occasionally require you to solve some basic puzzle in order to get close enough to grab them. Most of these are hidden in plain sight around the city. There are also security cameras and other breakable objects around the city for you to destroy, giving you hundreds upon hundreds of little, repetitive things to complete if you want to see everything. I... didn't do this. It's a bit extreme. At least the game gives you ways to mark these objects on your map, so it's less about hunting them down and more about just going to the spots and finding the items. Once you've completed the game, you're dropped back into the city to mop up any side missions and collecting. Or you could just jump right into New Game Plus, which is a harder setting that removes the counter icons (making combat more challenging) and mixing up the enemy placement to give you tougher enemies earlier in the game. Any trophies you've found stay collected in New Game Plus, so you won't be repeating everything your second time around. If you like Batman's combat a lot, playing through this way is a great way to get a second, tougher dose of it.

Arkham City's story features a second playable character, but there's a catch. Yes, you can play as Catwoman in four different chapters that pop up at specific points in the story. But these sequences only happen if you've entered a code included with new copies of the game or if you purchase access. Locking away relevant main story content--her story intertwines with Batman's--feels especially despicable. Maybe you can just chalk it up to the changing face of the video game industry as it tries to find ways to curb used sales, but it's a fairly annoying way to handle the situation.

Outside of the main story, you can opt to replay Catwoman's four chapters (again, only if you have the required components) or jump into the challenge rooms. The challenge rooms, which appear as a part of "Riddler's Revenge," give you a chance to flex your combat or predator muscles in rooms that are unlocked as you collect Riddler trophies in the main game. Some of these rooms come right out of the campaign. Speaking of campaigns, the challenge mode now has a mini-campaign mode that lets you string three challenge rooms together, with modifiers that force you to change up the way you play. So, in some cases, you might be forced to start with less health, a stricter time limit, and so on. Some are positive, like electric batarangs that eliminate enemies in one shot. The game provides several campaigns of its own, each with an individual leaderboard, but you can also string any of the levels together in a custom campaign, if you like.

If you want to be reductive about it, Arkham City is more Batman, and if you want more Batman, there's no question: you should play this game. But there's more to it than that. In the two years since Arkham Asylum, there hasn't really been anything like it until now. Getting another chance to use Batman's considerable combat talents as you engage in one of the best fighting systems going today is a joy. The city looks terrific, like it's one step away from just bursting into flames as criminals crawl across every single surface doing... whatever it is that criminals do when they're locked in a city-shaped prison. The interior areas look just as good, giving you a sense that, again, this is a realistic place that's been overrun. The voice acting, featuring plenty of the same cast members that performed so perfectly last time around, is incredibly sharp, with writing that fits what you'd expect from most of the different characters you face. But to sum it all up, it's hard to imagine any fan of action games coming away from Arkham City disappointed. It might not rewrite the book on Batman video games, but when you're building off of such a strong position--and you're only shipping the second game with such similarities, rather than a third or fourth--it's hard to bicker too much about what changes the developers did or didn't make. 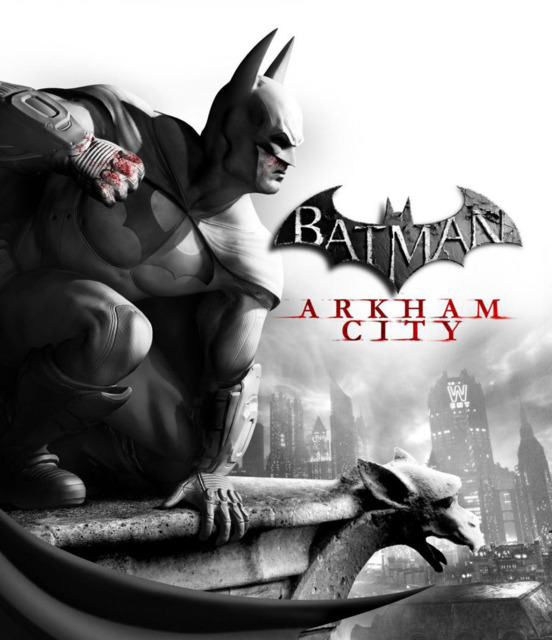