by Jeff Gerstmann on February 8, 2010
Share:TwitterFacebookReddit

While the story doesn't always hit as hard as its predecessor, there are plenty of great gameplay changes that make BioShock 2 a worthwhile experience.


One of the things that made 2007's BioShock such a stand-out was its focus on exploration and discovery. At the beginning of the game, you knew next to nothing about the nature of your own character, let alone the underwater Utopia-gone-wrong called Rapture. The city was more of a star than any of the characters living in it, and around every corner you'd find an audio log or some piece of art deco architecture that filled in a little bit more of the puzzle. The catch was that actually playing BioShock was far less interesting than watching its story unfold. BioShock 2 addresses a lot of the gameplay issues from the first game, with more fulfilling combat and abilities. But the story feels more like a footnote to the events of the first game, making it best suited to superfans who can live with just a little bit more insight into what made Rapture tick.

BioShock 2's story is set around ten years after the events of the first game, and you play as a character that is usually referred to as Subject Delta. Delta is an advanced Big Daddy prototype, so you'll spend the game stomping around in a big suit with a large drill that serves as your melee weapon. Unlike the typical Daddies, Delta has free will, but he's also been bound to a specific Little Sister, and if they remain apart for too long, Delta shuts down into a comatose state. So the game is a quest to get your (now grown) Little Sister back. But it just so happens that your Little Sister is Eleanor Lamb, daughter of Sofia Lamb, who's now in charge of Rapture. The elder Lamb has restarted the Little Sister project and is collecting ADAM to satisfy her own warped philosophical slant. You being alive is enough to throw a big monkey wrench into her plans, so you'll naturally have a fight on your hands.

Thankfully, you'll be able to use both of your hands at the same time during that fight. Dual-wielding plasmids and firearms is one of the most noticeable improvements to the way BioShock 2 plays. Both types of weapons are are made more useful by the way you can fire them off one after the other. It makes for a faster-paced game, overall. Also, the firearms in BioShock 2 are much better. You'll start out with a simple rivet gun, but you'll eventually collect a shotgun, a machine gun, a grenade launcher, and so on. The weapons feel more accurate and damaging than the guns in the first game. Back then, I was content to play through most of the game using the wrench, since the weapons felt less effective than just running up and whacking your foes. In BioShock 2, the weapons and their upgrades make them a lot more fun to use than the default drill, which requires fuel and doesn't feel nearly as deadly as stabbing someone with a huge, spinning drill probably should. Hacking, which lets you use turrets and security bots as extra defense and can lower prices at vending machines, has been overhauled in a way that takes less time to complete. Research is now done via a video camera concept where you get more research points for filming enemies being attacked in a variety of ways. Both systems are better than their counterparts in the previous game.

Many plasmids from the first game return, but those can also be upgraded for charged-up effects. Charging up a higher-level shot of ice from the Winter Blast plasmid freezes enemies in a block of ice, making them much easier to shatter. You can, again, also slot tonics that grant you passive effects, such as making your plasmid use require less of the mana-like EVE that powers them, reducing the amount of damage you take, or even allowing you to slowly regain health and EVE by standing in water. As before, you can change up the plasmids and tonics you're using pretty frequently, and there are enough different options for both that you can customize Delta around the way you play the game.

All of this combat takes place in areas of Rapture that didn't appear in the first game, but the same look and feel is maintained. The biggest change is that these older sections of the city were served by a train line. This is used to justify the linear nature of BioShock 2. Most of your tasks involve getting the train to a new area, where it's blocked, so you'll have to get off and clear a path to continue. Once you move to the next level, there's no going back, so you'll have to deal with the Little Sisters you see immediately, rather than backtracking to find them later. While this is different than the first BioShock, it's not a major change.

Most of your goals are plainly laid-out and very straightforward, like "get the key" or "flip the switch." But along the way, you'll encounter Little Sisters, who skip around the city, sucking ADAM out of corpses with a comically oversized syringe. In order to collect the ADAM you'll need to purchase more plasmids and tonics, you'll want to deal with every Little Sister you see. The process is a bit more involved than it was in the previous game, though as before, it starts with you defeating the Big Daddy that protects her. Once she's unescorted, you can "adopt" the Sister and put her up on your shoulder (which, since this is a first-person game, you never actually see). You can then take the sister to specific corpses and let her harvest ADAM from them. But once you set her down, splicers come out of the woodwork and attempt to get your little girl. You'll need to protect her while she works, which makes your ability to set a few different types of traps come in handy. There are also tonics that make the Sister work faster, which I found extremely helpful as staying alive while being swarmed by enemies makes the gathering process the hardest part of the entire game. After two gathering sessions, you can take the Sister to one of the many vent holes around Rapture, release her from her curse by turning her back into a regular little girl, and send her on her way. Or, at any point in this process, you can just hit the "harvest" button and kill her for her ADAM. Keeping them alive and healing them gives you some bonus tonics that really come in handy, and after completing every gathering session and saving every Sister, I was left with more ADAM than I knew what to do with by the end of the game.

The other substantial obstacle in BioShock 2 is the Big Sister. These are grown-up Little Sisters who wear something resembling Big Daddy armor, and one attacks as soon as you've dealt with every girl in a level. Though new enemies like the Brute Splicer are tricky, the Big Sister, with her fast attacks and plasmid abilities, is the single toughest foe in Rapture. It's also the closest that the game ever gets to a boss fight.

While BioShock 2 is more fun to play than its predecessor, a lot of the thrills that came from simply exploring Rapture and listening to audio logs come up short in the sequel. Sofia Lamb's reasons for running Rapture are fine fodder for Delta's adventure, but many of the game's audio logs feel like they're trying to find different ways to cram Lamb into the history of Rapture. You'll find audio logs from Andrew Ryan, complaining about Lamb's psychiatric practice or debating her in public. You'll find logs from Lamb and other characters talking about her as the main threat to Ryan's power, as if Frank "Atlas" Fontaine never existed. Lamb feels shoehorned into Rapture, making the game's events feel very disconnected from the happenings of the first game. The little bits and pieces of Andrew Ryan you get in BioShock 2 end up being the most satisfying things about its story, even if the events of the first game don't always feel like they're being handled with care.

Considering that both games in the BioShock series sort of live and die by their stories, online multiplayer doesn't immediately spring to mind as an obvious area of improvement for the series. So it's surprising that the game's multiplayer take on Rapture ends up being so much fun. Most of the structure of the multiplayer isn't earth-shattering, as it uses the persistent leveling system popularized by Modern Warfare and inserts you into game types that are fancy, Rapture-themed ways to say " team deathmatch" or " capture the flag," among others. But everything's been given just enough of a BioShock-themed twist to make it all work. You'll be able to hack turrets to fight for your team, or hack vending machines to spit out a bomb if an enemy player gets too close. Big Daddy suits occasionally spawn in the level, letting players don the armor and gain some powerful (though temporary) new abilities. When standing over a dead enemy, you can whip out your camera and take some research photos for a damage bonus against that player. Plus, the effective combination of plasmids and conventional weapons makes for a good time.

The multiplayer is set during the fall of Rapture, when Atlas and Ryan were effectively at war. As such, the city isn't quite so torn up on the multiplayer maps, most of which are based on locations from the first game, such as Fort Frolic and Hephaestus. Configuring your loadouts and unlocking additional tonics--many of which are custom-built for the multiplayer mode--also gives you a great deal of flexibility when it comes to building around your play style. The multiplayer is a surprisingly strong addition to the package that definitely earns its keep, even if it doesn't get quite as deep as some of the other popular shooters out there. Heck, it's nice to see a good, competent multiplayer shooter that doesn't involve real-world military conflicts or space marines.

The sights and sounds of Rapture are mostly terrific. The audio logs and actual face-to-face encounters with humans are well-voiced, and there are little things with the sound design--like the way that leaking water will ping off of your helmet--that help immerse you in the world. Visually, the game is sharper than its predecessor and better at making Rapture look dirty, though there are plenty of walls and other textured surfaces that look bad up close. It's recommended that 360 users install the game to their hard drives to minimize that telltale texture popping that surfaces in so many Unreal Engine games these days.

It's hard to make too many direct comparisons to the first BioShock when talking about this sequel, because such a big part of the first game was seeing Rapture for the first time and experiencing a real sense of discovery as you went deeper and deeper into its fiction. Returning to Rapture--even a different part of the city--is naturally going to be less impressive. But the smart additions on the gameplay side make BioShock 2 rewarding in a different way, while those who want to know more about Andrew Ryan's underwater city will find just enough to make the return trip worthwhile. 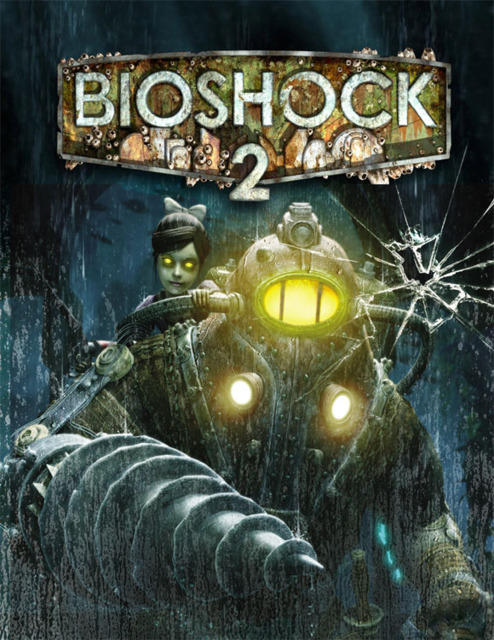