Despite established pro-Lincoln leanings, Jeff and Ryan seem pretty keen on all Columbia has to offer.

by Jeff Gerstmann on March 25, 2013
Share:TwitterFacebookReddit

Infinite keeps the soul of BioShock at its core, but it isn't afraid to strike out in some very exciting new directions.

How do you surprise someone that's expecting a surprise? I went into BioShock Infinite wondering if Irrational was content to simply fall back on formula, swapping out city beneath the sea for a city above the clouds, the Big Daddy for Songbird, and so on. Instead, Infinite cleverly preys on those expectations right out of the gate. It feeds you just enough familiar material and gameplay to make it all fit into what you think the word "BioShock" implies, but it strikes out in some really exciting directions, too. The combat is nicely varied and the story moves along at a pace that gives you plenty of things to piece together on your own as you get closer and closer to discover what's really going on in Columbia.

Columbia is a floating city ruled by a man named Comstock, more commonly known as "the Prophet," and its intended inhabitants worship America's founding fathers as if they were gods themselves. The game opens in 1912 with the player controlling a man named Booker DeWitt--a man with debts and regrets who agrees to hunt down a girl who happens to live in this mysterious city. One rough ride in the sky later and DeWitt is loose in Comstock's decaying utopia on the hunt for Elizabeth.

Though you're not certain why you're trying to find her, it quickly becomes clear that she's a central figure in many of the strange things happening around Columbia. These things take the form of tears in reality, small openings to... something, sometime, or somewhere else. Most of the more meaningful tears are utilized to further the game's linear story in some fairly mindbending ways. This is one of the ways that Infinite distinguished itself from its predecessor. Rather than waiting for one big moment to twist and pull the rug out from underneath you, this game starts showing you things that make you immediately start to question what you're seeing, how it is being shown to you, and what it all means. A mysterious male-female duo shows up along the way, seemingly to help you connect a few of the dots, but they also provide an effective bit of comic relief. They ended up being my favorite characters in a game filled with interesting, properly-motivated individuals and a world that draws you in until you're practically begging to know more about it.

Alongside your extraction mission, Columbia is falling into utter chaos and is on the brink of a full-on race and/or class war. Some factions of the city preach in favor of maintaining racial purity, and one of the game's most powerful sequences is an early scene depicting a mixed-race relationship--something the powers in control of the city most definitely frown upon. But this doesn't boil down to the typical good guys/bad guys scenario. Due to the nature of the world and the way it changes over time, you'll also see that Vox Populi's rebel forces are capable of just as much cruelty as the forces they seek to overthrow. The changing relationships between factions and the way the main characters fit into that puzzle make Infinite far more complex than the average video game story, and it's exciting to see heavier themes like these on display.

I really could go on and on about how absorbing the world, story, and characters of BioShock Infinite are, but at some point it'd start to get into subjects and concepts that are best left until you're experiencing them for yourself. It was an impactful 12 hours that answered nearly all of the questions I had about the universe, but left one or two glaring ones that I wish I knew more about. And it wraps up with a striking sequence that adds a lot of context to everything leading up to it without simply repeating the same sort of tricks found in BioShock.

There is a proper game pinning this thought-provoking story together, and like the story, Infinite's gameplay pulls together just enough of the original BioShock's concepts and combat to make it feel familiar while also maintaining its individuality. Like BioShock, Infinite is a first-person shooter with spell-casting, though you'll use "vigors" and work with a "salt" meter instead of firing off "plasmids" and keeping an eye on your "eve" reserves. You can hold two weapons in your inventory and easily swap between them. Similarly, you can equip two different vigors and toggle between them by tapping a button. Weapons include a pistol, a rocket launcher, a shotgun, a machine gun, a carbine, a sniper rifle, and other fairly basic fare, though a variety of weapon upgrades can be purchased to expand their usefulness a bit. Vigors let you do things like shoot electricity, lob fire grenades, pull enemies in towards you, charge in for a pumped-up melee attack, launch a murder of crows that distract and damage enemies, and so on. There are also trap versions of most abilities that you can place by holding down, rather than simply tapping the vigor button. I never much cared for the trap abilities in BioShock and they're not my thing here, either, but the abilities are about as useful as they were in the original BioShock.

Though there are optional treasures and audio logs to find in various corners and hallways, Infinite is a linear game, and you can tap up on the D pad at any time to make an arrow appear and guide you in the right direction. The game's great about pacing its combat sequences and spreading things out, giving you plenty of time to explore your well-detailed surroundings between gunfights. I found myself mostly relying on the electricity power to stun a chain of enemies long enough to shoot them all in the head with a carbine or machine gun.

Elizabeth is with you for much of the game, but an on-screen bit of text makes it pretty clear that Infinite isn't one big escort mission and that she can "take care of herself." That's only partially true, really. She'll still run into trouble, but only when the story demands it. The rest of the time, enemies just seem to ignore her completely. During combat, she'll occasionally shout out to let you know that she's found some salts, health, or ammo. You can tap a button to get her to toss the goods over. Out of combat, she'll occasionally find and toss you some money. The way the AI appears to be blind to Elizabeth's presence is one of the game's few disconnects, though at least you don't have to constantly rescue her from trouble.

Infinite's audio is outstanding. The voice cast has turned in a remarkable set of performances, and the dialogue they're reading is well-written and believable. The music is also a top-notch collection of material performed in a period-appropriate way. Hearing a barbershop quartet performance of the Beach Boys' "God Only Knows" also served as one of the early clues that Columbia is a strange place, indeed. There's a lot to like about the way Infinite looks, especially on the PC, but I'll sum it up by saying that the emotional points of this story would fall completely flat if Elizabeth's face hadn't been as animated as it is. Those animations do more to sell the story than anything else.

You'll see a lot of BioShock in Infinite, but even if you try to make direct comparisons between the two, it's clear that Infinite is a far better game than its predecessor. It moves at a better pace, with more meaningful and more playable big encounters than BioShock. But it still carries that sense of exploration and the feeling of dread that comes with knowing that everything is just continuing to unravel before your very eyes. Watching Columbia fall while attempting to take Elizabeth away from the floating city is a fantastic way to spend a few days. 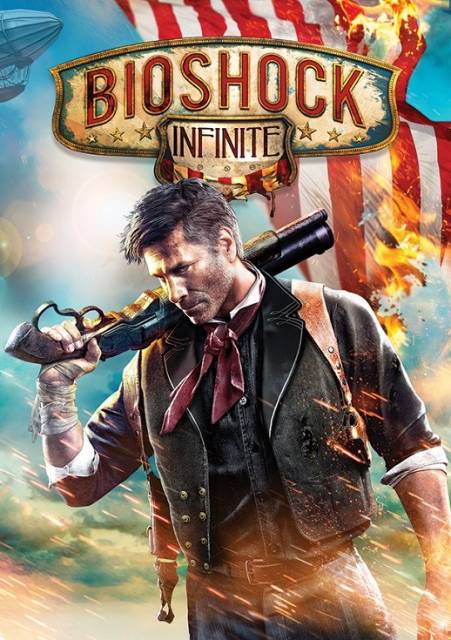