by Patrick Klepek on September 23, 2011
Share:TwitterFacebookReddit

Your introduction to Commander Video probably came through Super Meat Boy. For many good reasons, very few people actually played anything released on Nintendo's WiiWare service, causing far too many to initially miss out on great games like World of Goo and NyxQuest. Those two escaped WiiWare, but until now, only Bit.Trip Beat and Bit.Trip Runner joined them.

Only Beat and Flux resemble one another, each a riff on Pong, with Beat slotted on the left, Flux on the right. Sometimes for better (Runner), sometimes for worse (Void), all of the Bit.Trip games are very different, their common thread being a satisfying intersection of music and gameplay. These are mixed genre rhythm games, and not unlike Guitar Hero or Rock Band, players feel actually like an instrument while playing. In this case, the player's musical participation has been largely abstracted. You're aware of the influence your actions are having on the music, but you're laser focused on dots. Lots and lots of dots.

Bit.Trip games benefit from players having a sense of rhythm, but like music games where notes are coming down the screen, it's entirely possible to play these games strictly following patterns. I mean, does anyone really think the kids on YouTube beating DragonForce songs are listening to the music?

The major selling points of Bit.Trip Saga are having every Bit.Trip game in one place in a portable form and experiencing them in 3D. The trippy, layered visuals rhythmically pounding over each Bit.Trip game seem natural for 3D, but whether that's a false assumption on my part or if Gaijin Games was simply unable to make it work, 3D is a non-starter here. Not only does the 3D fail to make much of an impression when switched on, in the case of games like Runner, the added effect is horribly detrimental to the frame rate. When the 3D is enabled, regardless of how far the slider's been pushed, the frame rate takes a big hit. In games where timing is everything, this is totally inexcusable, rendering 3D a worthless addition.

Even with 3D flipped off, there were moments in Runner where apparently enough is happening to cause the frame rate to drop. I don't remember any frame rate hassles in the WiiWare version. It's truly a bummer, and an unfortunate blemish on a package that includes some truly terrific games known for visual flair.

Elsewhere, the ports hold up. Pong-like Beat and Flux become much easier to play on 3DS, the former especially. Beat stages do not feature a single checkpoint (the series didn't have checkpoints until Flux), and the stylus allows for precise movement of the paddle across the screen. You can tap the stylus anywhere else on the screen and the paddle will jump there immediately. Compared to slowly rotating an iPhone or Wii Remote, it's much more effective against the game's sadistic dot patterns. And don't even trying playing with the circle pad; it's far too sensitive and there are zero options to tweak it, another instance of this collection not getting the level of attention these games deserved. The others play as they should, just as god-damn-I-wanna-throw-my-3DS hard as I remember them.

Visual issues aside, Bit.Trip Saga remains a pretty awesome set. Your other option is picking up Bit.Trip Complete, which also collects every game with new challenges. These games would set you back $42 on WiiWare, and it's $39.99 on 3DS. It's not the ultimate sendoff for what may very well be the end of the series, but another chance to put my fingers through the Runner gauntlet is worthwhile. 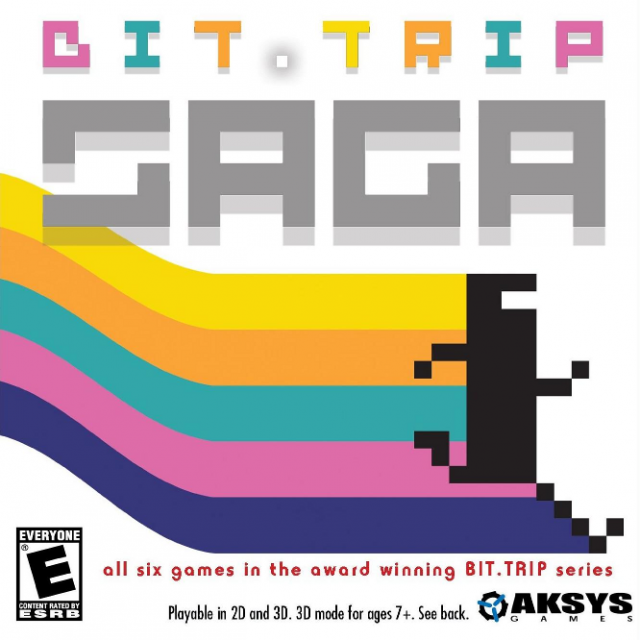