by Ryan Davis on May 25, 2010
Share:TwitterFacebookReddit

Bizarre Creations has found a game worthy of the developer's namesake in Blur, a game that finds something fun in the peculiar pairing of weighty, quietly technical real-world racing and over-the-top kart combat.


Blur is a game that seems to embody a convergence of the two franchises that developer Bizarre Creations has become most synonymous with over the past nine years: Project Gotham Racing and Geometry Wars. The crossover racing game pedigree established by Project Gotham Racing--and, to a similar degree, the Metropolis Street Racer series that came before it--is apparent in the real-world-plus environments and the weight with which the bevy of licensed cars handle in Blur. It's also hard to ignore the black-lit neon glow that both Blur and Geometry Wars share, but there's a third game that's owed its due here, and that's Mario Kart. Blur calls it "powered up racing," but it's basically putting a more sophisticated face on a genre of racing game that has seen peaks in popularity, but has never really broken out of its casual, kid-friendly ghetto. The parts are familiar, but the pairing makes for a unique, if not necessarily transcendental, kind of chaotic fun.

If you've played one of Bizarre Creations' past racing games, you'll be coming into Blur with a pretty good idea of how the cars will handle. BC has rarely aimed for 100% simulation-style authenticity with its racing games, but Blur steers well clear of any arcade-style comparisons simply by demanding that you not barrel full-throttle into ever turn, expecting to effortlessly drift your way through. You'll (hopefully) learn early that such behavior will almost invariably end in a disappointing spin-out, and that each car has a fairly specific handling profile. There are multiple classes of cars, but it's not always a clear-cut case of better-than/worse-than, with some flourishing on the game's slippery dirt tracks, while others are better equipped for the narrow urban corridors and hard turns of the street courses. There's just a huge number of cars in Blur, and they cover a wide range of makes, models, and vintages, from high-whining European super-cars to knobby-tired 4x4 off-roaders. Cars will occasionally bump awkwardly up into the air upon impact, and there can be some squirreliness when you don't expect it, but there's a general sense of sturdiness to the core driving in Blur.

It's a sense that is then completely up-ended by the game's power-up system, which litters the tracks with icons that you can pick up and store up to three of. It's a good thing, too, because otherwise Blur would be a competent racer, but one that's not nearly as noteworthy or as visually striking. The incandescent power-ups, and the light-writer aesthetic that they lend to the rest of the game, are absolutely key to the experience here. The game trades in its own unique power-up patois, which, despite some exotic names, tend to do the kinds of things you expect from combative racing games. You've got common shield, nitrous, and mine-dropping abilities, as well as the barge, which sends out a localized shockwave; the bolt, which arms you with three, small, long-range-capable projectiles; the shock, which lays a gauntlet of lightning columns out in front of the first-place racer; and the shunt, the heavy-hitter of the lot, which allows you to lock onto a nearby opponent and send them flipping into the air.

Most of the offensive weapons will at least slow you down and do some damage that, if allowed to go unchecked, will leave you a smoldering wreck, at least for a few precious seconds while you wait for a new car to spawn. But what makes the power-up system in Blur so strategically interesting is the way you can counter most offensive attacks with other offensives or alternate fires. If someone locks onto you with a shunt, you can fire a shunt or a series of bolts back, drop a mine, or trigger a barge to neutralize it. It's a system that requires good situational awareness, smart power-up management, and a firm understanding of the rock-paper-scissors-lizard-Spock dynamics of the power-ups, and it's responsible for much of Blur's chaotic charm. Exacerbating that chaos is the fact that Blur tends to trade in high-volume races, often putting twenty cars on the track at once. This can make the first lap particularly volatile, but the power-ups ensure that you're bound to experience hard swings in any lap.

Save for the simulation-style games that put more emphasis on time trials than live opponents, most racing games tend to benefit from live competition, and this is especially so for kart racers. So I wasn't too surprised to find that the single-player portion of Blur wasn't really the main draw of this package, though I was still a little surprised at how simple and, due to some balancing issues, fairly inessential it ended up being. The progression is simple and linear, presenting you with a series of brackets, each anchored by a unique named driver. Complete enough races and meet all of that driver's conditions, and you'll unlock the next bracket. You'll unlock new cars along the way, as well the bracket leaders' custom ride along with a unique power-up enhancement with each bracket win. The problem with the career, aside from its relative simplicity, is that it's freakin' hard, with the computer-controlled drivers giving no quarter almost from the get-go. In the spirit of full disclosure, I should say that I didn't make it through the whole single-player campaign, partially because I found myself frustrated with repeating the same races over and over again, and partially because I felt like, after the first few brackets, I wasn't really seeing anything new, just stiffer competition.

But really, what pulled me away from the career was the draw of Blur's online multiplayer, which adopts the increasingly familiar carrot-on-a-stick persistence popularized by Modern Warfare, rewarding you with access to new cars, performance-enhancing mods, and different online playlists for your performance. The beauty of this, and what sets it so far apart from the single-player game, is that you don't need to win every race to earn experience towards your rank--heck, you don't even have to place, so long as you drive with a little panache and make smart, or at least frequent use of the power-up system. There are a hundred little ways that you can earn points towards your rank, and I found regular satisfaction finishing in the middle of the pack, but still cashing in plenty of points from some performance-based challenge. It took me a good six hours of time logged in the multiplayer to climb about halfway up the online ranking system, though I get the sense that your progression grows exponentially slower with each additional level.

I suppose it's also worth mentioning that Blur is the most socially networked game I've personally seen, with hooks for both Facebook and Twitter, allowing you to bug the everliving hell out of your friends and followers with weird automated messages. It's kind of dumb, and it's all completely optional, though it seems like a portent of bad things to come in other, future games. What makes the social underpinnings of Blur meaningful, though, is the way it lets you tag a buddy as your arch rival, adding the objective of beating their performance in specific races.

If you step back and look at the parts, there's a weird dissonance to Blur, and it doesn't seem like it should work as well as it does, even if it can be an imperfect experience. Bizarre Creations has always danced along the line between simulation and style, and this game only serves to further blur that line.
Load Comments 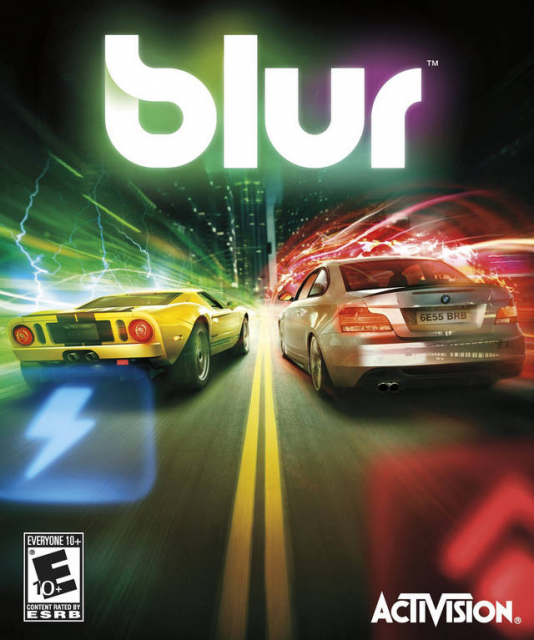