by Brad Shoemaker on September 19, 2013
Share:TwitterFacebookReddit

Starbreeze's fairytale adventure is so finely crafted, you'd be hard pressed to find many better games this year.

The airy, heartfelt Brothers: A Tale of Two Sons isn't the sort of game you'd expect from Starbreeze, the purveyors of grit and grime that previously brought you sordid fare like Syndicate and The Darkness. Unlike those grimly onerous games, Brothers operates with a beautifully spare efficiency in every aspect of its narrative and design, propelling you through a striking storybook landscape in which gameplay mechanics and thematic storytelling thread together more tightly than most games can manage. The resulting journey is so singularly devoted to creating a specific tone and atmosphere that you won't likely be able to stop thinking about it until long after you've seen it through to the end.

The simple premise has two brothers traipsing across a brilliant fantasy world seeking a mystical cure for their ailing father. The characters speak in a made-up language, allowing the game to paint its emotional hues with a broad brush. That makes it easy to get caught up in the nuances of the individual personalities; the younger brother was present for the drowning of his mother, for instance, so naturally he's afraid of swimming himself and relies on his older brother for help. But his size comes in handy in places only he is small enough to fit. The moment-to-moment journey revolves around the ways these two use their relative strengths to support the other through each of the obstacles their quest subjects them to.

It's the game's uniquely simple control scheme that makes you fully appreciate how much the two characters rely on each other while navigating the harsh landscape in front of them. You move each brother with one of the analog sticks, and perform a single context-sensitive action with the respective trigger. Brothers is a puzzle-driven adventure game, if you want to pigeonhole it, but this isn't a game about brainteasers. The solutions to any given scenario are usually pretty obvious; the challenge comes in managing two distinct characters at the same time. You might find your hands refusing to obey your brain on occasion, but even then, this isn't a difficult game to make your way through. Rather than challenge your manual dexterity or puzzle-solving abilities, it's a game that asks you to focus on the emotional context of the actions you're performing, and you won't be able to play for long without doing exactly that.

Though the core of Brothers is its character-driven story, the game would have lingered in my mind for no other reason than the incredible design of its world. You start your journey in a sleepy seaside village, but before you end your quest you'll have encountered numerous, fantastically imagined landscapes and characters plucked from all sorts of classic mythology. And you never linger in one place too long; the game moves you so expeditiously from one location to the next, showing you so many marvelous sights, that it assumes a dreamy, fairytale quality. There's an incredible mastery of distance, scale, and perspective in the way the environments are built and framed; though it naturally looks better on a PC, it's also one of the best-looking games I can remember on consoles as well and performs perfectly fine on those machines too. For a "small" downloadable game, it's stunningly impressive.

(It's tempting to rattle off a dozen specific examples of memorable moments in this game, but this feels like one of those rare games where the less you know about it, the better a time you'll have. Discovering each new environment, and all the imagination and detail contained within, is one of chief joys of playing it.)

Given the economy of its pacing and storytelling, Brothers is another of what I've come to think of as single-sitting games. Similar to short, emotionally charged experiences like Journey and Gone Home, Brothers isn't especially long but packs such meaning and quality into each scene that it never feels like it's wasting or padding out a single minute. Like those other games, it's designed to follow a specific narrative trajectory, and build up a certain emotional pitch, such that you'd get the most out of it by absorbing it holistically from start to finish. And this is coming from someone who never, ever marathons their way through video games.

Brothers isn't necessarily an uplifting game; to compare it to a fairytale is to evoke the original meaning of that term, the one designed to scare small children. Some grim things occur in the course of the brothers' quest. But the brothers' commitment to their goal and to each other is so strong, the various parts of this game so superbly crafted and woven together, that it's hard not to feel deeply touched when you finally reach the end of the road and see how deftly this game marries its gameplay to its themes in a way few have before. If you're the sort of person who thinks video games are capable of not just entertaining us but also making us think and feel, you owe it to yourself to play Brothers. 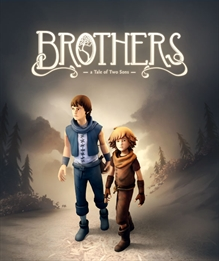