by Ryan Davis on September 22, 2011
Share:TwitterFacebookReddit

Pure vehicular mayhem should be a lot more fun than it is in Burnout Crash.

Criterion Games has spent the past decade perfecting the video game car crash with its smash-happy Burnout franchise--a series that, much like NASCAR, is ostensibly about racing, though everyone knows the real draw are the spectacular car crashes, explosively rendered in Burnout with an almost fetishistic care. Even when it’s not the main focus of their attention, such as in last year’s Need for Speed: Hot Pursuit, Criterion has still been able to deliver satisfyingly crunchy car crashes. With this pedigree in mind, it’s easy to see the potential of Burnout Crash, a downloadable title that retains most of the hallmark mechanics, yet strips clean the racing element, putting the focus squarely on creating as many charred chassis and as much twisted metal on the asphalt as possible. It’s an idea that probably wouldn’t carry a full-size game, yet seems like it could be a good fit for a downloadable title. So why does Burnout Crash feel so underwhelming?

In part, it’s because the game struggles with order and chaos, with gameplay that naturally favors pure pandemonium and a contrasting primary gameplay mode that demands nuance where mayhem is in chronically short supply. More fundamentally, though, it’s because this is a trifle of a game, without much meaningful gameplay variety from beginning to end. That’s not to say there aren’t fleeting moments of fun, or that there’s no skill to performing the perfect car crash. Once you’ve cracked the code on how to approach an intersection and when to trigger subsequent explosions, though, it turns monotonous pretty quick, and the game’s attempts to extend the experience with social hooks and bonus objectives ring hollow.

The notion of forgoing any kind of racing pretext and just crashing the hell out of some cars isn’t a new one, even for Burnout. Fans should remember the Crash Mode from pre-Paradise Burnout games, a dedicated mode where the player would hurtle into a busy intersection, smashing other vehicles and racking up as much damage as possible. As the cars pile up, your Crashbreaker meter starts to fill, and once it’s charged, you can trigger another explosion with the intent of creating some high-value chain reactions of destruction. In a good run, you could pop the Crashbreaker multiple times, racking up millions of dollars in damage in the process. It’s part pinball, part ad-hoc Rube Goldberg contraption, and all fiery explosions. That’s the basis for Burnout Crash, which retains the significant Crash Mode mechanics, but switches the action to a top-down perspective, adds the ability to blow up buildings, and introduces a whole host of absurd special-effect vehicles and ridiculous game-ending events that serve to reinforce the whole pinball table vibe.

As a cackling variant in a game already flush with burning rubber and shattered glass, Crash Mode was a fun distraction, but Criterion’s attempts to flesh out the concept for Burnout Crash work against its strengths. There are three ways to play any of the intersections in Burnout Crash, though by default, you only have access to one of them, which wouldn’t be a big deal if the default mode weren't the least compelling of the three. Called Road Trip, this mode features a set traffic pattern progression for each intersection, with special events like explosive gas trucks, tornadoes, meteor strikes, tidal waves, and, uh, lobster monsters appearing at specific crash milestones. All the while, though, you have to be incredibly vigilant and methodical about making sure that no cars make it out of the intersection alive, as the round will end immediately once five cars are allowed to pass through unmolested. Since your ability to move around the intersection is directly linked to your Crashbreaker ability, you have to exercise a lot of restraint, which comes at the direct expense of causing big, awesome explosions. It can be frustrating, particularly when you’re sitting there with no Crashbreaker, helplessly watching traffic ride off into the sunset, and the rounds always feel like they go on for several minutes too long.

Far more engaging is the Rush Hour mode, which ditches the five-strikes limit in favor of a 90-second timer, while also throwing way more traffic at you. It’s more chaotic and less exacting, which makes more sense for both the underlying premise as well as the soft, limited controls you actually have. The Pile Up mode sort of splits the difference between Road Trip and Rush Hour, throwing a predefined number of cars at the intersection before entering a score-multiplied end-game sequence where your multiplier is defined by how many cars you let slip past. It’s a structure that encourages you to try and catch all the traffic you can in the intersection without obliterating it completely until the score multiplier kicks in. It requires less precision than the Road Trip mode while rewarding your restraint with big crazy explosions at the end.

There are 18 different intersections (read: levels) included in Burnout Crash, and though they often feature different road layouts and surrounding structures that can require a slightly different approach for maximum carnage, the experience doesn’t really significantly evolve from beginning to end. You do, however, unlock additional vehicles with unique stats as you progress, though once I unlocked the slow-moving but highly explosive cargo truck, I never felt compelled to revisit the others. Access to additional intersections is throttled by a star system that rewards score goals and secondary objectives, usually concerning destroying specific objects in specific ways. The Autolog feature introduced in Need for Speed: Hot Pursuit resurfaces here, creating dynamic challenges based on your friends’ performance. But without as much meaningful gameplay variety from mode to mode or intersection to intersection, its ability to extend the experience is limited.

On the Xbox 360, you have the option of playing Burnout Crash with Kinect, with a specific party mode designed to take advantage of it. Stepping around the room as though you’re walking on a giant D-pad to influence the aftertouch is effective enough, if not particularly exciting, though in a party evironment, there’s something to be said for forcing players to jump in the air, clap their hands, or squat like they’re laying an egg to trigger the Crashbreaker.

It’s not a completely disappointing experience, but I felt like too much of my time with Burnout Crash was spent almost having fun. In a way, that’s almost more frustrating than if Criterion had whiffed it completely, since you can see the game that you’d want to play right in front of you, and yet it remains just out of reach. 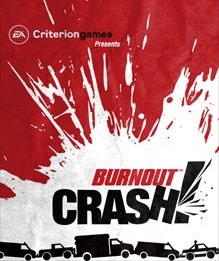 Dan and Jan slice, stasis, and stomp their way through USG Ishimura all over again as they check out the remake to the original Dead Space!