by Ryan Davis on June 18, 2011
Share:TwitterFacebookReddit

Child of Eden is Tetsuya Mizuguchi's most fully realized lightspeed bioluminescent cyberspace techno-synthetic neon air sculpture. That it's also a video game seems beside the point.

A love letter to the positive potential of technology, humanity's capacity of greatness, synesthasia, and--in perhaps the only constant between all of Q? Entertainment games--the soaring hopefulness of turn-of-the-century vocal dance music, Child of Eden is, in literally everything but name, the sequel to Rez. Never a significant commercial success, and not without significant, meritous criticisms against it, Rez is still an influential and impactful game, blending intricate abstract imagery, cryptic narrative design, and pulsing, rhythmic gameplay in a way a commercial game had never done before it. It was arguably the game that triggered the ever-maddening "games as art" black hole of internet debate in earnest, and virtually every abstract, ethereal little sincerely subtitled indie rhythmic shooter since then owes a debt to Rez. As is so often the case, what you get when the creator of a creative flashpoint--in this case, Q? Entertainment's Tetsuya Mizuguchi--returns to the scene is...well, more of the same.

Granted, with Child of Eden, you're getting it with improved visuals, thanks to the considerable advantage the Xbox 360 has over the Dreamcast hardware Rez was originally developed for, as well as support for optional Kinect controls, which pair intuitively with the game's inherently simple, easy-going gameplay, but you'll lose a bit of the gamepad's cold accuracy in the process. Make no mistake, this game is a feast for the senses--or, perhaps more accurately, an evening spent grinding your molars against an irresponsible amount of fruit-flavored hard candy...for the senses--but it does not push boundaries the way Rez did, and with what amounts to just a few hours of raw, quantifiable gameplay in store, it's kind of a hard sell, perhaps even moreso than the original Rez.

And yet, aside from Rez, there's really nothing quite like the blissed-out soundscapes of Child of Eden. If you're receptive to the indulgences of early Internet cyber-idealism, or you're simply up for some bonged-out visuals of a crystal space whale flying into your mind's eye and shit, it's an experience worth some time and attention.

It should be telling that I'm hesitant to address Child of Eden as a game outright. As a video game, judged alongside other, traditional pieces of interactive electronic entertainment, well, Child of Eden is a little...limited. Let's just say the game part is not its greatest strength. If we're going to cook it down for scrap, Child of Eden is an on-rails shooter with lock-on targeting, the likes of which there are no particularly modern comparisons for, the closest being something like Panzer Dragoon Orta. (Twisted Pixel's upcoming Gunstringer for Kinect is actually shaping up to be a weirdly apt companion to Child of Eden, but let's not get ahead of ourselves here.) You paint enemies with a cursor, hit the trigger, and those enemies are gone. "Enemies" almost seems a little strong, since most of the things you're shooting seem kind of ambivalent about the whole affair, though targets that do bite back usually do so with color-coded projectiles that require you to switch to your manual weapon to eliminate.

You'll find health pick-ups, as well as Euphoria power-ups, which let you clear the screen when you're in a pinch. There are five main levels of unique, effectively static content in Child of Eden, and once you complete all five, you'll unlock a higher difficulty, some sound and visual effects, as well as a challenge mode that goes longer, but is dronier and less theatrical than the main levels. Most levels take, in my experience, a little more than 10 minutes to complete, though the game doles out access to subsequent levels in such a way that you'll likely have to play previous levels multiple times in order to progress.

Judged purely by this mechanical criteria, Child of Eden sounds lackluster at best. It's short, simple, and frankly, not terribly challenging. What makes Child of Eden worth playing--or, at least experiencing--are the brain-bursting, techno-psychedelic environments that you fly through. Following an opening scroll concerning some very serious nonsense about future ladies being digitized and reborn in the space Internet (I think), you're plunged into one level after another of what are essentially high-concept light shows. The first level feels like the most direct connection to Rez, with complex geometric structures built out of simple polygonal shapes that undulate and transform as the level continues. By the second level you're watching a crystal space whale transform into the mighty phoenix, and the third level...well, the third level takes place on a river, and is called "Beauty." Not sure I could describe it much better than that. The levels only get weirder, and more visually astonishing, from there.

If you couldn't tell already, Child of Eden is an achingly sincere game with a serious case of freshman philosophy. The substance of the game's profundity is wide open to debate, but it's never too overbearing about it, and there's something to be said for trying to divine the creator's intent from the thousands of swirling, flat-shaded cubes currently undulating across your screen.

It's astonishing that Rez would ever receive a sequel, official or otherwise, so the very existence of Child of Eden is kind of incredible. That it hewed so close to the formula of the original isn't an inherent fault, but it's hard not to wish there was just more of Child of Eden to experience. 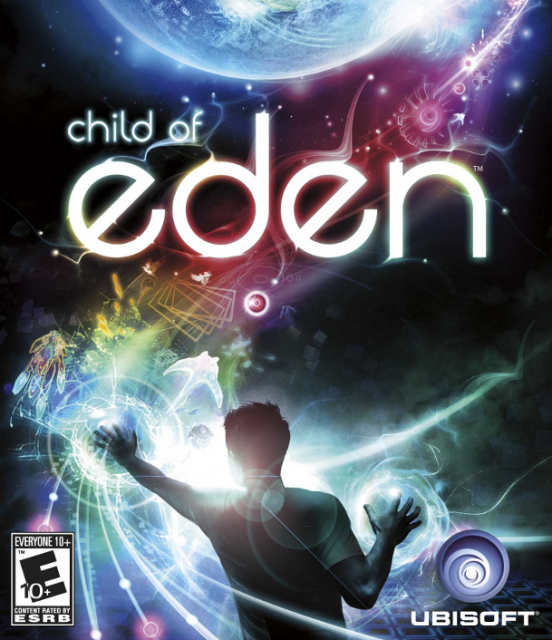