by Jeff Gerstmann on July 5, 2010
Share:TwitterFacebookReddit

Crackdown 2's open nature can lead to some cool moments, but even the cool moments feel like they were lifted directly from the previous game.


While the original Crackdown presented players with a handful of goals, its real appeal was as an open environment for players looking to screw around with another player via Xbox Live. For better or for worse, Crackdown 2 picks up precisely where the first game left off. If you're driven by set goals, you'll complete most of the meaningful tasks in around 10 hours, after which you'll probably shrug and move on. But if you're the type to just get in and blow up random cars with a few friends, well, Crackdown 2 can be a lot more than its missions.

Like the previous game, Crackdown 2 comes to you with a razor-thin premise: you're an agent of The Agency, and your task is to protect Pacific City. Two factions are out there, stirring up trouble. Cell is a terrorist group that takes the place of the gangs found in the previous game. The freaks are infected mutant creatures that roam the streets, spitting up acid and swiping at you with their claws. The freaks are also sensitive to UV light, so your core task is to power up various beacons (which are protected by Cell, who seem to think that the Agency's hiding a cure for the freak virus) and protect light bombs as they charge up to take down underground freak nests. Once you activate all nine of the bombs, there's one last task to complete and then the credits roll. There's no character development as a part of the main storyline, and the only way to glean any sort of meaning out of the game is to find audio logs laying around the city or explore the various videos and information Microsoft has pumped out ahead of the game's release. Either way, most of that stuff is meaningless. As before, if you're coming into Crackdown 2 expecting to get some kind of story, you'll be thoroughly disappointed. That said, if you played the first game, you have a pretty good idea about what to expect from both the story and the action.

There are some gameplay additions and some things in place to take some of the monotony out of the game's more tedious tasks, but by and large, Crackdown 2 is Crackdown 1 with marginally better graphics. The visual enhancement mostly manifests itself as a much longer draw distance, which makes standing on tall buildings and looking around the city pretty cool. While this is the same Pacific City from the first game, the city's fallen on some hard times, so more of the buildings are torn up and there's a darker style to the proceedings. This further manifests itself via the game's day/night cycle, which mostly seems present so that someone could make a great "the freaks come out at night" reference. When the sun goes down, the roving Cell vehicles are replaced with streets full of freaks, who come right up out of the ground. It gives the game a Dead Rising sort of feel, as you're given plenty of opportunities to race through the city streets, mowing down hundreds of freaks as you do so. For the most part, the game can ably handle all of those on-screen enemies, but a few late-game moments have the frame rate chugging a bit more than you'd like.

The biggest change to the way Crackdown 2 plays is the addition of the wingsuit, a glide ability that lets you sort of fly around the city. It has a Pilotwings or Super Mario World slant to it, as you'll need to pitch yourself down to pick up speed before you can pull up and turn that speed into lift. But you won't get it until your agility rating is at its maximum level, and it's not especially useful--it's mostly there to give you a set of tasks where you need to glide through some rings placed around the world. Other changes make the race missions easier by removing the time you need to beat to win. Instead, it's more concerned with slapping your times onto an online leaderboard. Also, the cars no longer morph based on your driving skill, so if you don't want to always drive the SUV (or the sluggish tank, which is the last unlockable Agency vehicle), you don't have to. But, like the first game, driving is pretty pointless when you can move faster on foot. The annoying lock-on targeting, which likes to point your weapons at empty vehicles rather than the bad guys standing in front of them, hasn't changed a bit.

Really, most of the game hasn't changed a bit. The way you jump and the occasional hassle of climbing a building only to find that those windowsills, for some reason, aren't objects you can grab onto are precisely the same as the original game. With most of the additions aimed at streamlining elements of the first game or, at least, making them less of a pain to deal with, Crackdown 2 occasionally feels like a big patch for the first game.

That's the rub. It's disappointing that so much of Crackdown 2 is completely lifted from the first game, but even though the genre has moved on to bigger and better things, a lot of those things are still fun to do. And those things are made more interesting when added to the inherent excitement that comes from cooperative play. Now you can drag three additional players along with you as you work your way through the city. There's plenty of mayhem-driven fun to be had if you're the sort of player that can appreciate the game's open-ended approach. If you're a fiend for collectibles, the mere thought of running around and collecting more agility orbs (including new orbs that try to escape your grasp, which I simply found to be stupid and not worth the effort) probably already has your interest piqued. This time, the game's map tells you which areas still have orbs in them, and you can send out an inFamous-style ping to make orbs show up on your minimap for a few seconds. You won't need more than half of the game's 500 agility orbs to max out your jumping skills, though, so some casual orb hunting is more than enough to get you pumped up.

I completed the game's primary task in around nine hours, then found myself drawn back in to mop up a few secondary tasks, but after 13 hours total, I've done just about everything I want to do in Crackdown 2, and the ending feels just as tacked-on and thrown together as the rest of the game's "plot." That's when you're supposed to turn to the game's 16-player multiplayer mode, but nothing about that mode is the least bit engaging. Applying the Crackdown mechanics to team deathmatch leads to even more annoyance with the game's targeting system. Rocket tag, a game where one player tries to grab an orb and stay alive for as long as possible while the other players--all armed with rocket launchers--blow everything up to get the orb for themselves, is just pure chaos. It's a bad fit for the franchise and probably won't draw your attention away from the main campaign for long.

There's a narrow subset of people that will absolutely love Crackdown 2 for it's "it ain't broke, so we didn't fix it" approach to sequel development. Those people are probably still playing the first Crackdown, though, so they'll be in a perfect position to see just how little some portions of the game have changed. If you're in that group or if you're just looking for something absolutely mindless to do with a few online friends, Crackdown 2 is practically perfect for that. But if you've already had your fill of Crackdown, the second game doesn't make enough changes to drag you back into Pacific City for longer than it takes to see the credits roll.
Jeff Gerstmann on Google+
Load Comments 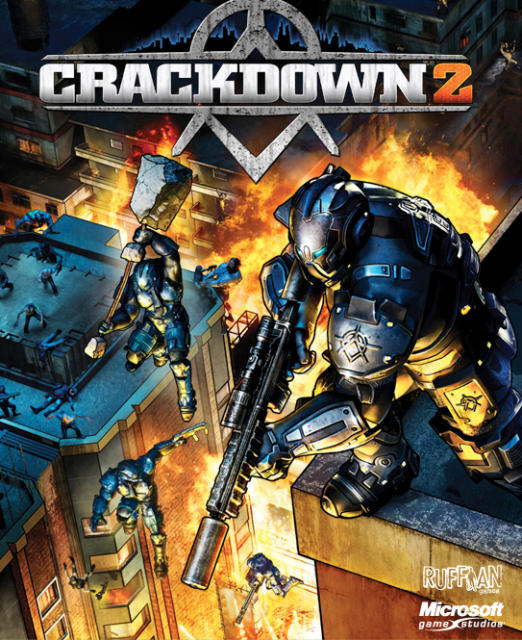