Dead Rising 2: Off the Record Review

by Brad Shoemaker on October 12, 2011
Share:TwitterFacebookReddit

In some important ways, Off the Record is the best Dead Rising yet. It's just a shame you've probably seen most of it before.

Dead Rising 2: Off the Record makes enough meaningful improvements and additions to the formula of Capcom's hectic, quirky zombie action series that it's easy to call this game the best Dead Rising to date. So it might sound odd to say that there's also a good chance you should skip this game entirely. Off the Record is billed as a sort of alternate-history version of Dead Rising 2 that replaces the previous hero, the noble but downtrodden motocross star Chuck Greene, with the series' original protagonist, the sleazy but downtrodden photojournalist Frank West. That idea has merit, but it's hard not to be disappointed by the sheer amount of content in this package that's lifted directly from the last game.

Of course, it will only seem recycled to you if you played through Dead Rising 2. I should state upfront that if you missed that game, and you're down for more of the bizarre humor, time-limited mission structure, and mass zombie slaughter this series offers, Off the Record is a great deal at $40, since it has everything in the original along with some nice extras. But that's also the problem with this game. The core storyline of Dead Rising 2, which involves a 72-hour zombie outbreak in the Vegas-like pleasure-dome of Fortune City, remains basically unchanged. A few of the characters' roles in the story are slightly different, and enough of the dialog has been rerecorded to integrate Frank seamlessly into the starring role, but by and large the story beats and even specific cutscenes usually range from slightly modified to essentially identical. As someone who for some baffling reason put at least 25 hours into Dead Rising 2, it was hard to shake the feeling that I'd seen all of this before, and even when things start to diverge a bit later in the game, it all feels too much like a retread. This game would stand more readily on its own if it offered a more unique story for Frank to make his way through.

That's not to say there isn't some new content here, even for returning players. A new theme park area has been grafted onto Fortune City that offers some silly carnival games and other ridiculous ways to kill zombies. Some of the collectible items like magazines have been moved around a bit, and a good number of the survivor side missions are also now in different places (though they're the same otherwise). And there's a handful of amusing new combo weapons to put together, but then, none of them are as consistently useful as old standbys like the nail bat and knife gloves. And of course, Frank still has his trusty camera, so you can earn extra experience points taking pictures of all the brutal, dramatic, and erotic sights a zombie-infested Fortune City has to offer. Even the DLC costumes from the first game are included on the disc. It's nice that this stuff is in here, but it's not nearly enough to offset how familiar the story progression and core missions are.

Some of the most meaningful additions in Off the Record are actually the ones that take place under the hood. Dead Rising 2 already offered three save slots (up from the original game's one), so you could stagger your save games and roll back to an earlier save if you locked yourself into a spot where you didn't have time to finish the next case file. Off the Record adds checkpoints to this system that trigger when you enter a new area or after you complete major objectives. The checkpoints act as a great safety net that prevents you from losing too much progress if haven't made a hard save in a while, and you happen to unexpectedly die or wander into a psychopath battle without being prepared. It's a minor point, but you can now also drop waypoints anywhere on the map, making it easier to find your way around to specific locations.

Finally (and I do mean finally), Off the Record has a sandbox mode that lets you roam the whole of Fortune City with no time limit. There are dozens of challenge missions scattered around the map that have you killing a quota of zombies in a specific way, or racing to a destination in a set amount of time, and so on. These objectives are amplified if you bring a second player in for co-op, and both versions of each mission have a leaderboard attached. Or you could forget about the missions entirely and just go nuts building weapons, killing zombies, and generally messing around. The best thing about the sandbox mode is that all of the experience points, cash, and even collectible things like combo cards that you earn there will transfer right back into the story mode. If you're the type of person who likes to level up your character for more health and inventory space before you really get going through the story, the sandbox offers you a good way to do that without playing the first couple of hours of the game multiple times ad nauseam. Alas, each mission has to be unlocked with a minimum number of zombie kills, so I found myself having to grind out a bunch of kills after I finished each mission, before I was able to take on the next one. That's an unfortunate limitation that slows down your enjoyment of the sandbox mode, but then it wouldn't be Dead Rising without the mechanics arbitrarily impeding your progress once in a while.

Since the vast majority of the assets here are straight from Dead Rising 2, this game looks almost exactly like that one did, so it's no surprise that the PC version is once again the best one, with a smoother frame rate and faster load times on a modern system (not to mention Xbox Live achievements, if you're into that sort of thing). But at least the console version's awful load times have been noticeably improved from before. That's some consolation when you lead survivors back to the safe room, but it's a shame the developers didn't go further and allow you to just drop them off at the entrance, without making you load into and back out of the safe room at all. Unlike the load times, the performance sadly isn't really improved on console, with the frame rate bogging down pretty badly in open areas with a lot of zombies. It's especially atrocious in that new theme park (cheekily dubbed the Uranus Zone). You'd think there would be more polish applied to the game's one completely new area, but the opposite is true.

Off the Record strikes me as a strange product. There are a lot of reasons to fondly remember Frank West, and it's fun to see him back in action here, even if he's put on a few. But the way this game depicts Frank going through nearly the same story you've seen before sort of cheapens the existence of the original Dead Rising 2. Video games are such a blatantly sequel-driven medium that I'm genuinely impressed any time a franchise makes a move as bold as replacing its protagonist, and moreover, Chuck Greene was a likable guy who did a respectable job with the whole reluctant-hero thing. Off the Record almost feels like it's giving up and saying, "OK, fine, here's that original guy you were so attached to." What this game means for a possible third Dead Rising remains to be seen, but at present, your interest in Off the Record should be directly dictated by how much Dead Rising 2 you've already played, and how much more you're still eager to play now. 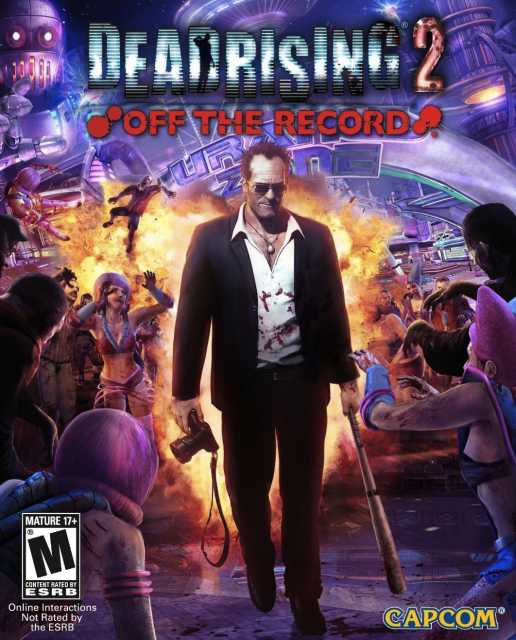