by Brad Shoemaker on September 29, 2009
Share:TwitterFacebookReddit

Extraction gets a lot of mileage out of the Dead Space setting, with a decent light-gun campaign that's worth playing through... once.


I almost feel like I need to offer apologies or excuses while recommending Dead Space Extraction, EA's Wii follow-up to last year's breakout original sci-fi horror shooter. Extraction's marketing campaign would like you to think of it as a "guided experience" that whisks you through the dramatic beginnings of the series' horrible space-monster outbreak, but in blunt terms, Extraction is an on-rails shooter. Blunter still: it's a light-gun game. These days, that's not a style of game serious game players usually gravitate toward. But keeping the genre's inherent restrictions in mind--not to mention the limitations of the Wii hardware--Extraction is really pretty good, for what it is.

You will certainly get the most mileage out of Extraction if you played through the first Dead Space, which the new game serves as a prequel to. You'll revisit a lot of familiar locations on Aegis VII and the USG Ishimura as you retrace the original excavation of the insidious artifact known as "the marker," and then battle the awful creatures that overrun the colony and ship in its wake. You're not any one character throughout the game; instead you swap between several perspectives among a group of survivors, revealing different areas of the ship and the different motivations of each person unlucky enough to be caught up in this awful mess.

The story is pretty thin--it's mostly a bare, on-the-run survival tale--but there are a couple of small, interesting elements that seem like they may tie into the inevitable Dead Space sequel. Also, the voice acting is flatly passable, for the most part, but there is some campy, B-movie-sounding bad delivery that actually works in the game's favor. The characters you run around with are unique and well-animated enough that I managed to identify with them and care to some degree about their eventual fates. I was surprised I came to care at all about the characters in a game of this sort.

I was also surprised to find that, hardly a year after the first Dead Space came out, I was already eager to jump back into the Ishimura's hellish corridors and stomp around in that world a little more. The Wii is certainly less capable than any platform you may have played the first game on, but the developers did a great job maintaining the art style and the Ishimura's specific design elements to visually tie the two games together and make this one look great. The sound design is also quite consistent, making this a comfortably familiar package for veterans from the first game.

Even if it's your first Dead Space, the shooting here is complex enough to be satisfying throughout. That's mainly because Extraction totally replicates the first game's grisly dismemberment mechanics, letting you--no, encouraging you to shoot heads, arms, legs, and other grotesque appendages off of the monsters that are constantly assaulting you. They die much faster that way, and the variety of weapons--most from the first game, with a couple of minor additions--give you a lot of different ways to take the monsters apart. You can also throw in a second player whenever you want, though it isn't necessary on the default difficulty.

There's only a moderate number of out-of-place Wii-based motion controls in the game. You'll occasionally shake the remote to fling a monster off of you or swipe the nunchuk for a melee attack. There's a computer-hacking minigame that makes you use the pointer to trace some circuits past different obstacles, which can be a little tough if you don't have a very steady hand. But thankfully the shooting is your primary occupation here. You twist the Wii remote 90 degrees to enable the alt-fire modes on each weapon, which ends up working well enough.

Extraction has most of the other things you'd look for from a Dead Space, too--things like audio logs, weapon upgrades, and character progression. Even the kinesis and stasis powers factor into the combat and puzzles in minor ways. But it's all been dumbed down considerably to fit into the on-rails nature of the game. You're along for the ride here as much as you're in control of it, which naturally limits the amount of interactivity the game offers you. You can choose between branching paths here and there, but otherwise you might as well be shooting from a rollercoaster car, albeit a pretty exciting one. There are a few fleeting moments where you can look around freely, but they last only a few seconds each. It's actually pretty hard to pick up a lot of the power-ups due to the way the camera angle whips around in service of a more dramatic presentation.

At least the game generally makes its limitations work toward a greater good. The camera work is believably frantic (someone watched Cloverfield), and I got the feeling that this is generally how I would jerk my head around if I were embroiled in a monster nightmare of my own. And the game is legitimately nightmarish. Severed heads and limbs--those of the remaining humans, not the monsters--go flying with abandon and the Ishimura is painted with blood. Characters routinely curse out loud, and hey, there's even a naked lady! The point is, this isn't a PG-rated Dead Space just because it's on the Wii. It's almost like the developers went out of their way to drive that point home.

Extraction presents a quandary. It's a pretty short game, at only five or six hours, and after what looks like a great setup for a big exciting finale, the game just sort of... ends, abruptly and poorly. Since there's a limited amount of interactivity and it's more or less the same each time through, you may not want to play it more than once. But if you're a fan of Dead Space or this sort of, um, "guided experience," you should definitely play it, even if you grab it as a rental or wait for it to hit the bargain bin. I was tempted to write off Dead Space Extraction purely on the superficial reputation of light-gun games, but I'm glad I didn't. All other things being equal, it's really not bad.
Brad Shoemaker on Google+
Load Comments 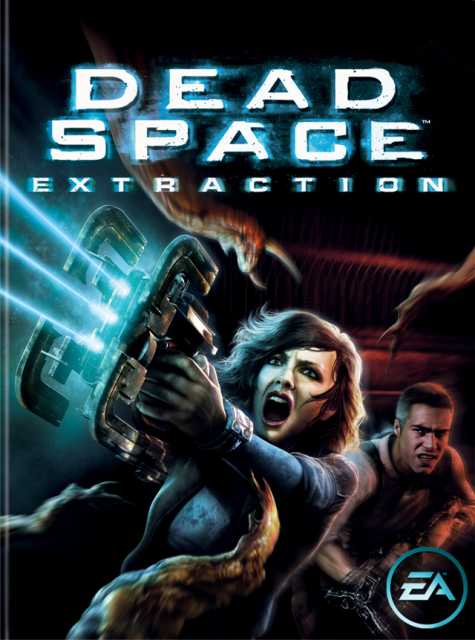